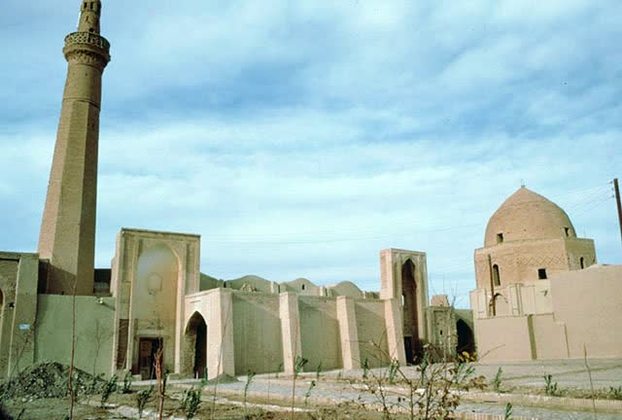 The Great Mosque of Na’in is an early Islamic structure, dating to the late tenth/fourth century AH with some remnants from an earlier phase. Since its tenth/fourth century AH, additions and renovations have been made to the mosque. This mosque is famous not only for its old age but also for its vibrant carved stucco ornamentation adorning the soffits and columns of the prayer hall.

The mosque is located in historical city of Na’in, toward the northern edge of the inhabited area in what is now a residential neighborhood. A large arterial road cut through the surrounding area leads from the modern city to the southern corner of the mosque.

The mosque comprises a hypostyle hall of irregular configuration surrounding a small, rectangular courtyard. Most of the bays of the hypostyle area surrounding the courtyard have no elaborate vaulting, but a few toward the southern corner where the current entrances to the mosque are.

The qibla axis is emphasized by angled piers, and also by the slightly increased width and height of the central nave, forming a lip which projects above the arcade roofline. This structure represents an emergent form of the monumental portal that would later pervade Iranian mosque design.

The Great Mosque of Na'in is renown for the extensive and masterful carved stucco of the mihrab and adjacent bays, including the oldest extant epigraphic friezes in Iran. Stylistically it bridges the stucco decoration of the Sasanian and Abbasid periods with that of the Seljuks; effusive vegetal forms released from earlier geometric constraints.

The minaret represents an important transition from the early square form to later rounded forms. Maintaining the early square plan at the base, a tall tapering octagonal mid-section rises to a short cylindrical shaft that terminates in a cornice decorated with carved stucco. The cornice holds a brick railing, forming a balcony upon which stands a thin cylindrical cap, pierced with apertures and resembling a dovecote. Later building additions enclose the minaret which was originally freestanding. The transitional form of this minaret, and its relatively unadorned state suggest that it is contemporary with the late tenth-early-eleventh/late fourth- early fifth century AH.

O'Kane, Bernard. "Iran and Central Asia." In Studies in Persian Art and Architecture, 119-139. Cairo: The American University in Cairo Press, 1995.