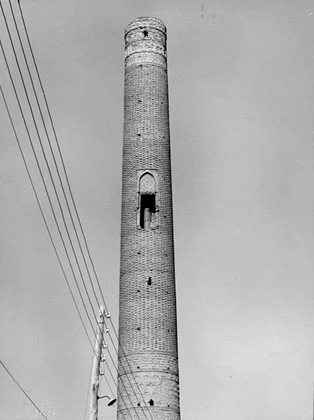 Share
The minaret of Chihil Dukhtaran stands in a small alleyway within the maze like streets of the Jubareh quarter of Isfahan. Much like the many tomb towers in Iran, it stands in solitary grandeur, not part of any extant building complex. The Chihil Dukhtaran of Isfahan was built in 1107-8 by Abi Al Fath Nahuji and with its namesake in Damghan (1054-56) and the neighboring Manar Sarban (1130-55) is an outstanding example of a free standing Seljuq minaret with a cylindrical shaft ornamented with varying brick patterns and tile inlays.

The origin of the term, Chihil Dukhtaran, which literally means 'forty virgins', though used for two twelfth century, Central Iranian Seljuq minarets cannot be ascribed with certainty to any historical event or patron type despite the various folk interpretations. The minaret is 21 meters high and consists primarily of a plain square plinth, an intermediate octagon and a circular shaft with varying horizontal sections of brick pattern and a decorative ornamental cornice band. A rectangular window surmounted by an arch, which could have served for the call to prayer, relieves the upper section of the shaft. The typical brick bond with wide rising joints alternates between bands of six-pointed stars, octagons and lozenge motifs, relieved by decorative terracotta tile panels of Kufic inscriptions. The Chihil Dukhtaran and other Seljuq minarets appear to have had considerable influence on the successive Ghurid victory towers built over Afghanistan and North of the Indian Subcontinent in the twelfth to thirteenth centuries.