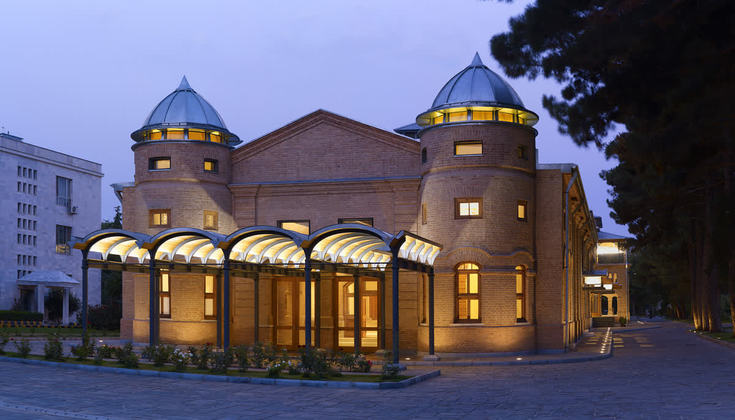 Initially built as a one-story pavilion in an open field to the west of the Royal Arg Palace during the reign of Amir Abdur Rahman Khan (1880-1905), the Stor Palace (also known as the Qasre Storay) was expanded on at least 3 occasions. In 1919, one of the rooms in the Palace was the setting for the signing of the Rawalpindi agreement, by which Afghanistan became an independent sovereign state. Part of the building was subsequently used by the renowned intellectual and reformer, Mahmoud Tarzi, who became Afghanistan’s first Minister of Foreign Affairs as an office. The Palace housed offices of the Ministry of Foreign Affairs until 1965, when most functions were re-located to a modern marble-clad building constructed to the east.

Originally built as a high single-story pavilion with lower openings covered by a deep-set arcade built around the perimeter of the building and clear-story windows located higher up in the walls to allow natural light to enter directly into internal spaces, the first extension of the pavilion is thought to have been to the east with the construction of a two-story brick masonry building with an arcaded portico and large terrace in 1912 during the reign of Habibullah Khan (1905-1919). A second extension, the large gathering hall to the west, is thought to have been added in 1915 to designs complementing the earlier addition on the opposite end of the building.

Later expansion works conformed to the brick architecture of the Palace by adding two circular “turrets” to the western limits of the building and a second-story, built above the remains of the late 19th century structure, thereby completely “encasing” the garden pavilion within later additions. Materials used for this third major intervention were recycled from other structures as brick sizes varied and wooden beams and coverings were found to be remnants of door frames and panels.

It is understood that a programme of minor restoration was undertaken during the 1970’s, and primarily entailed re-pointing and repairs of external brickwork with cement-based mortar, as well painting of internal decorative features. Preliminary building surveys and assessments were carried out from 2009-11, and a tri-partite agreement was formulated between the Governments of Afghanistan and India and the Aga Khan Development Network, providing a framework for the comprehensive rehabilitation and restoration of the building carried out by the Aga Khan Trust for Culture between 2013-2016.

Following the preparation of a comprehensive physical survey, which entailed undertaking building archaeology, and the finalization of a detailed conservation design, rehabilitation works carried out included the reconstruction of the roof of the palace, structural consolidation and reinforcement works, the re-pointing of all external elevations, extensive restoration of internal finishes including cast & pressed metal features, wooden ceilings, plaster and marble decorations, the provision of state-of-the-art mechanical heating, electrical and plumbing services, and the complete landscaping of the immediate area around the Palace.