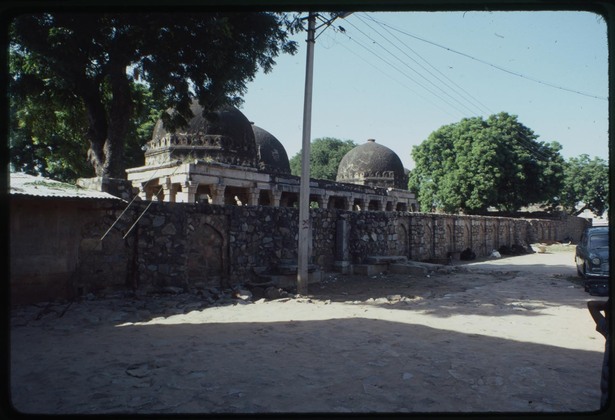 Share
Hauz Khas is an area in Delhi that was developed during the time of Firuz Shah Tughluq (reg. 1351 - 88) along a water reservoir, now commonly referred to as the "Hauz Khas" (royal tank). As a growing sultanate in India, Delhi was facing an acute water shortage, and the water reservoir (hauz) was conceived of as a public utility project to collect rainwater over a large expanse of land. The hauz itself was dug during the time of Ala al Din Khalji (reg. 1296 - 1316) and re-excavated during the time of Firuz Shah Tughluq, who then built the madrasa complex and other settlements around it. 600 meters wide by 700 meters long and 4 meters deep, the tank has a storage capacity of 800,000 cubic meters of water. In total, the Hauz Khas madrasa complex comprises a madrasa, mosque, Firuz Shah's tomb, and six domed pavilions, all built between 1352 and 1354 along the south and east edges of the water reservoir.

The madrasa complex measures 76 meters N-S by 138 meters along the E-W. The six individual domed pavilions are all scattered in the gardens of the eastern part of the complex. The main structure, which consists of the connected pavilions and domed towers, is a single building in the shape of two arms (or an "L") that run along the south and east edges of the reservoir and intersect at the southeast corner in Firuz Shah's tomb. The mosque forms the northernmost tip of the eastern arm. Below it are two pavilions which were used as madrasas. The southernmost madrasa of the eastern "arm" was connected to two other madrasa pavilions (in the southern "arm") via a small domed gateway to Firuz Shah's tomb. This single building is double-storied, but the lower stories are visible only from the reservoir side.

The Southern Pavilion:
The original entrance to the entire madrasa complex was from the Hauz Khas settlements in the south. One enters through a forecourt facing a two-storied domed tower, of which the central dome has a diameter of 6.15 meters. The domed tower is flanked by two halls that have a row of four double columns facing the reservoir, followed by another row of four single columns that succeed them in the interior. The lower stories are divided into fifteen bays by arcuate vaulting, and it is conjectured that the upper stories, now collapsed, originally followed the same arrangement of bays in a trabeated system (which strengthened the pavilion structurally). In the center of the south side is a second, smaller domed tower (the dome is 4.5 meters in diameter), which also has a fifteen-bayed hall to its east. This hall ends in a dome tower, also containing a dome 4.5 meters in diameter. Each of these three domed towers has balconies overlooking the reservoir tank on both stories. The balconies on the upper stories are supported by decorative brackets, whereas the lower ones have a corbelled support. They were both covered by roof overhangs (chajjas) but only the chajjas for the upper stories now survive.

Tomb of Firuz Shah:
Firuz Shah's tomb lies at the corner intersection of the two wings of the madrasa building. One enters the tomb through a veranda in the south, with a low enclosure wall leading to the (southern) doorway. The low enclosure wall is raised on a plinth, constructed in modules of three horizontal stone members supported on eight vertical ones. The rectangular shafts of the vertical stone posts are chamfered at angles and are each topped by capitals in the form of fourteen sided polyhedrons.

The dome of Firuz Shah's tomb, 8.8 m. in diameter, rises highest in the profile of the building facing the reservoir. Exactly square in form, its thick walls measure 14.8 meters in length and height. Entering the tomb from the north, one proceeds through a domed gateway measuring two-thirds the height of the tomb and one-third its width. Following the entry is a hall divided into fifteen bays and ending with a doorway similar to the entrance gateway. This second doorway leads through a narrow, L-shaped corridor, to the tomb chamber and cenotaph. This L-shaped arrangement is repeated on the western doorway of the tomb that leads to the open pavilion on the west.

The interior tomb walls support squinches and muqarnas that support, in turn, the octagonal drum for the dome. At the center of the dome is a circular gold medallion with Quranic inscriptions. Two overlapping four pointed stars, one rotated at 90 degrees to the other, circumscribe this medallion, with each of their arms having smaller medallions than the central one.
On the exterior, the base of the dome is decorated with foliated crenellations. At ground level, steps on the north and south sides abut the tomb walls, leading down towards larger steps that continue into the reservoir. The grand scale and elaborate form of these large steps suggest their ceremonial and practical usage during the Tughluqid period.

Mosque:
The mosque lies at the northernmost end of the eastern arm of the connected madrasa buildings. The mosque is entered from the southeast side through a domed gateway. Adjoining this gateway are three rooms, each measuring 5.3 long by 2.4 meters wide. They face an open court that could have been a part of the mosque, but their specific function is unknown. One then arrives in a second open courtyard that has a "C"-shaped arrangement of colonnades on an elevated platform and lies to the west of the entry court. To the north and the south, these columns are arranged in double rows; to the west, against the qibla wall, only one row of columns is present. This open-to-sky court surrounded by the covered "C"-shaped colonnade formed the prayer space facing the five mihrabs on the qibla wall.

The other mihrabs, two on either side of the central one, are set into the wall and have grilled windows that rest on brackets. Such a treatment of an open mihrab is considered to have been unconventional even for the Tughluqid period.

Each of the madrasa buildings was constructed of a hewn gray stone faced with a local form of smooth durable stucco (gach), made from a mixture of mica and plaster. It is conjectured that the madrasa buildings were originally whitewashed with plaster and then painted vermilion, while the domes were gilded. The resulting brilliance would have been reflected back in the surface of the water in the reservoir below.

Other Pavilions:
To the east of the complex is an informal garden with six domed pavilions scattered within it. Due to the arrangement of the madrasa buildings facing the reservoir, the garden is on the same level as their second storey. The pavilions signify six important grave sites, and follow different types: one is square in form, another is hexagonal, and three are octagonal. Several unidentified grave sites are also found within the southeast part of the complex.

To the north of these small domed pavilions is a triple-domed pavilion resting on a 0.8 meter plinth; stone steps project out from its entablature. The pavilion is a trabeated structure with broad square shaped columns, which sit on wider bases and are topped with decorative capitals. The column capitals then support beams, from which stone awnings (chajjas) project. Moving up to the three hemispherical domes, a band of foliated motifs decorates each of the three drums, and the domes themselves are topped with kalasa motifs. The western dome of the pavilion measures 5.5 meters in diameter and the smaller domes on the north and south measure 4.5 meters. To the west of the triple domed pavilion is a cross-vaulted hall that is now in ruins. It has massive square shaped double columns facing the reservoir and the garden that are followed by a row of single columns in the interior. It is conjectured that this was also used as a part of the madrasa.

Hindu architectural elements are present throughout the complex, including a trabeated building style, projecting plinth cornices, column capitals, and stone awnings (chajjas) supported on decorative brackets. Also, crenellations run along the entire madrasa roofline facing the garden, but are absent on the side facing the reservoir.

The Hauz Khas complex was favored with both fertile land and a royal endowment from the Tughluq dynasty. It became important for food production, located as it was in a densely populated area, and with its endowment, it also became the chief center of theological study in fourteenth-century Delhi.

Since the 1980s, residential areas around the Hauz Khas have undergone gentrification, and at present (2007) they comprise a mixed residential and commercial area serving high-income groups. The madrasa buildings, Firuz Shah's tomb, and other the ancillary structures near the tank still exist; they have been preserved, although their condition is fair at best.