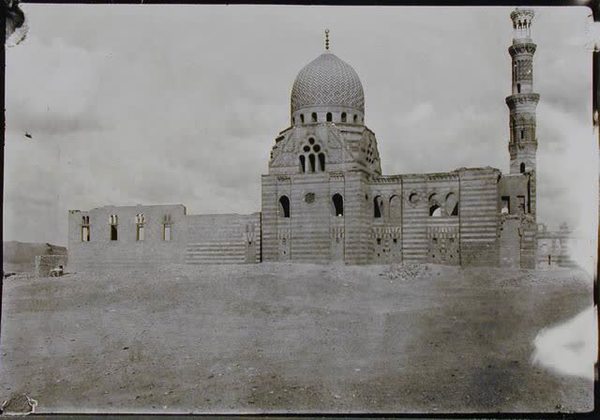 Share
The complex of Qurqumas, a mamluk of Sultan Qaytbay and a grand amir under Sultan al-Ghuri, was built in 1506-7. The complex as it now stands is what remains of a large number of structures Qurqumas built in the cemetery, including annexes, kitchens, storehouses, lodgings, wells with saqiyas, stables, and ablutions courts. The present building includes a khanqah, a mosque-madrasa, a sabil-kuttab, and private residential quarters, in addition to the mausoleum. The main cruciform hall, similar to those in the Qaytbay and other religious complexes of the period, is neither a khanqah nor a madrasa. It served as a congregational mosque which accommodated Sufi hudur sessions and some teaching activities not specific to a certain rite. The rab' has duplexes, units built on two floors, with a latrine on both floors of each unit. Tenants did not necessarily belong to the foundation.

Perhaps the most interesting element of this building is to be found in the living rooms at the southern end of the monument. They can be reached from the main door in the courtyard or from an internal staircase on the other side of the mausoleum. This unit is called the qasr, the palace. Although the inclusion of these presidential units was common in multifunctional desert complexes, this was the only such example that has survived. This is where the patron stayed when he visited the foundation for feast days or on special occasions. At ground level the arched rooms provided space for storage and stabling. The area above includes an open courtyard, a large reception room, a sleeping room, and a latrine.

The Polish-Egyptian Group for restoration of Islamic Monuments worked on the complex between 1984 and 1988, and the Ministry of Culture is currently at task.

Misiorowski, Andrzej. Mausoleum of Qurqumas in Cairo: An Example of the Architecture and Building Art of the Mamlouk Period. Warsaw: PKZ. 1979-1991.

Sayed, Hazem. "The Rab' in Cairo: A Window on Mamluk Architecture and Urbanism." Ph.D. diss., Massachusetts Institute of Technology, 1987.