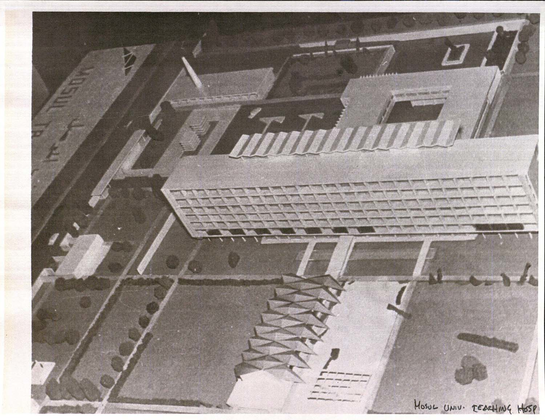 Share
The Ibn Sina Teaching Hospital was one of the main hospitals serving the city of Mosul. It is located on the right bank of the Tigris to the north of the old city in the quarter known as al-Shifa. Modernist Iraqi architect Hisham Munir designed the building, whose construction ended in 1964. The hospital was badly damaged during 2016-2017.

The hospital was the first project Hisham Munir completed upon returning to Iraq after his graduation from the University of Southern California. Munir submitted the design as part of a competition for a 500-bed hospital, then called the Mosul TB Hospital (Mustashfa al-Imrad al-Sadari fi al-Mawsil). He won the competition, and supervised the construction of the project. According to a summary of the project provided by Munir:

"Our design concept expanded on the latest American Hospitals, employing coordinated efficiency for nurse stations, patients and doctors. Although we agree with the saying 'architecture can not cure people,' we designed with our conviction that good design has the power to heal by creating ambient atmospheres, and to enhance the performance of the doctors and nurses inevitably passing on to the well-being of the patients. The design for the Teaching Hospital integrated bold geometric forms with up-to-date technology. The forms of folded plates further inspired the design, creating an atmosphere reminiscent of tents used for patients and family visits and gatherings. This approach reflects my philosophy of using up-to-date-technology to create inspired architecture that is visually, though never literally, vernacular and traditional."1

The hospital was severely damaged during the battle between Da'ish (ISIS) and a U.S.-led coalition for control of the old city of Mosul during 2016 and 2017, which ended in airstrikes on the old city by the U.S.-led coalition. As of July 2019, the hospital building still remained in a heavily damaged state.2
Sources:
1. Communication from Hisham Munir, 2016.
2. Statement on Iraq by Dr. Ahmed al-Mandhari, WHO Regional Director for the Eastern Mediterranean. http://www.emro.who.int/media/news/statement-on-iraq-by-dr-ahmed-al-mandhari.html [Accessed November 18, 2019].