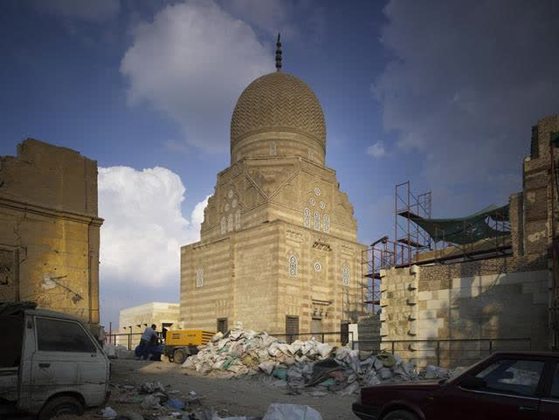 In spite of its inscription as a World Heritage Site in 1979, Historic Cairo was not given enough attention and individual buildings were suffering neglect, serious deterioration and lack of maintenance. During the early phases of the design of Azhar Park, new light was projected on the adjacent neighbourhood of Darb al-Ahmar, as the Park hills provide views to a number of magnificent monuments. With its medieval structures, domes and minarets amid the dense urban fabric, the Darb al-Ahmar district invites visitors to the Park to come and explore the jewels of Islamic art and architecture.

In a secondary stage, the success of AKTC’s conservation activities attracted donors, such as the World Monuments Fund, and the American Research Center in Egypt through a grant from the United States Agency for International Development, to partner with AKTC for new projects in the Darb al-Ahmar district, such as the Tarabay al-Sharify Mausoleum (1503), Aslam Mosque (1348) [and square] and Aqsunqur Mosque (also known as the Blue Mosque, 1345–1652).
The project site, built in 1503 lies on the southern side of Azhar Park, just outside the Historic Wall. The project, conducted between 2006 and 2009, included the removal of several meters of rubbish accumulated around the monument, structural consolidation, and conservation of both interior and exterior surfaces of the mausoleum, madrassa, and sabil-kuttab, and the organization of exterior spaces in order to prepare the area as the southern entry point to Azhar Park.

The Darb el-Ahmar community, one of the poorest in historic Cairo, did not have the resources to undertake this important conservation project. The goal, however, was not only the conservation of historic buildings, but the social and economic improvement of the neighborhood by bringing an important cultural asset back to use and appreciation. A major component of the project was training for local residents in traditional building crafts and conservation activities.

Tarabay complex lies on the southern side of Azhar Park, just outside the Historic Wall. The buildings on site include the mausoleum and sabil of Tarabay as well as the ribat of Azdumur. Tarabay al-Sharify was purchased as a slave by Mamluk Sultan Qaytbay, and subsequently freed and appointed Amir in the late 15th century. Azdumur was also purchased by Qaytbay, and appointed to a number of governmental positions. He built his tomb on the northern side of the mausoleum of Tarabay. There is no documentation regarding the relationship between Tarabay and Azdumur to explain why their mausoleums were constructed in such proximity.
Source: Aga Khan Trust for Culture