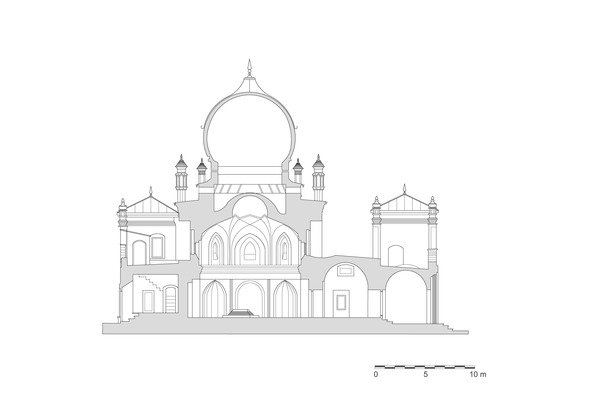 In the late 19th century, Amir Abdur Rahman Khan commissioned a garden pavilion which, after his death in 1901, was transformed by his heir, Habibullah Khan, into a mausoleum. Since the mid-1990s, the building was used as an office for the Department of Historic Monuments who, in 2003, requested the Aga Khan Trust for Culture's support in conserving the mausoleum, which had water penetrating into its roofs. When emergency conservation works began in 2005, modern concrete was removed from the flat roof around the central dome. This was followed by repairs to structural damage in the domes, which was then backfilled with brick chips and a layer of porous lime concrete was laid, finished with a weatherproof surface of flat fired-brick paving. Damaged sections of iron sheeting over the main brick dome and the two port-cochères were repaired, along with downpipes and gutters. Selective repairs were carried out to the brick parapets and external plasterwork and services were upgraded. In addition to these works, teams carried out selective rehabilitation works on the roof of a triangular mosque adjacent to the mausoleum.

The mosque, which was introduced to the site in the mid-1990s, had water penetration problems similar to those of the mausoleum. Teams cleared the mosque of debris and the brick-masonry structure was repaired before a final water-proofing layer of porous lime concrete was laid and finished with a weatherproof surface of flat fired-brick paving.