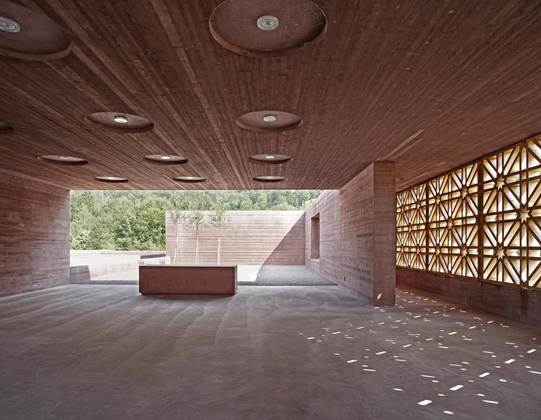 Share
Recipient of the Aga Khan Award for Architecture in 2013.
The Cemetery serves Vorarlberg, the industrialised westernmost state of Austria, where over eight percent of the population is Muslim. Though the Islamic community in Austria has had a long history, only recently have burials according to the Islamic rite become possible. Prior to this, Muslims – especially first and second generation – used to send their dead back to their countries of origin or opt for burial in extension of existing cemeteries, but without Islamic rites. The principal materials used were exposed reinforced concrete for the walls and oak wood for the ornamentation of the entrance facade and the interior of the prayer space.
A lattice-like system of red concrete walls of varying heights and patterned by formwork delineates five distinct staggered grave fields oriented towards Mecca and a rectangular one-storey building in a simple but monumental design; towards the road, higher walls provide a feeling of enclosure; towards the mountains they are lower and embedded in the ground; everywhere, though, they are broken and interrupted, encouraging a continuous flow of space and dialogue with the surrounding landscape. The space includes ablution rooms and assembly rooms in a subdued palette that give onto a courtyard. The prayer room on the far side of the courtyard reprises the lattice-work theme with Kufic calligraphy in metal mesh on the “qibla” wall. The subtle simplicity of the Cemetery’s design and its interaction with its natural surroundings provide a calm and dignified place for spiritual contemplation, burial and mourning
Jury Citation
“The Islamic Cemetery, in its restrained and measured expression, belies a complex cultural negotiation. In the context of its host environment, it presents a symbolically charged site as a place of resolve. The project brought together a multi-faith, multi-ethnic group of actors to realise the wish of an immigrant community seeking to create a space that fulfils their spiritual aspirations and, at the same time, responds to the context of their adopted country with a culturally sensitive design and aesthetic. Simple in expression and poetic in form, it not only engages the natural landscape in an intelligent manner but also suspends any notion of declaration. While emphasising spiritual pluralism, the Cemetery also provides the final destination for a minority group in a dominant society. ”
Source: Aga Khan Trust for Culture