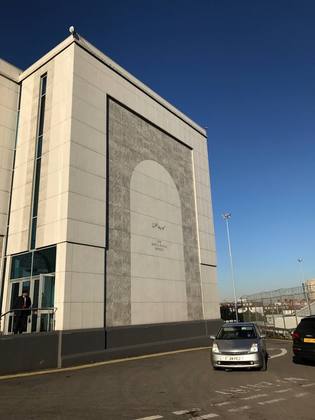 Share
Baitul Futuh Mosque is the largest mosque in the UK, and among the largest in Western Europe. The 2500 m2 mosque, completed in 2003, accommodates as many as 10,000 worshipers.  It features a dome with a 16 m diameter that rises 8 m above the roof, 23 m above ground at the apex. There are 2 minarets, 35 m and 25.5 m in height. It is the central focus of the mosque complex that redevelops a 5.2 acre site once occupied by a dairy.

The Ahmadiyya Community purchased the property in 1996, and on October 19, 1999 Mirza Tahir Ahmad, then the leader of the community, placed the cornerstone to begin construction.  Facilities of the complex include offices, a library, an exhibition hall and multipurpose function rooms, athletic facilities, kitchen and dining facilities, washroom facilities to accommodate ablutions for the large number of worshipers, and even broadcast facilities for radio and television. The historic facade of the dairy company has been incorporated by Sutton Griffin Architects into plans for the development of the site. The dairy's chimney was transformed into a minaret, and the main building housed administrative offices until 2015 when the building was badly damaged in an act of arson.
Since the fire, the administrative functions of the community have been carried out in makeshift structures around the property, but in June 2016 John McAslan and Partners, the firm contracted to renovate the badly damaged buildings, revealed its redevelopment plans. The renovation is intended to reflect the Ahmadiyya community's credo of "Love for all, hatred for none," a phrase that is already emblazoned on exterior and interior facades around the property. This philosophy already motivates the community to open its facilities to the community for meetings and functions.
In an article published in August 2016, Kassia St. Clair explains on this will be achieved.

To create that effect, the architects...reinterpreted a traditional Islamic design motif: screens. The proposed frontage is grand and colonnaded, but composed of intricately patterned layers of screens, so that the shift from public to private space is gradual, and the building feels porous, with dappled natural light reaching far into its interior.
As well as a sense of openness, the new design is also more democratic. “Everyone comes into the same space,” says Fanos Panayides, director of major projects at John McAslan & Partners, “before splitting off into the separate routes.” These routes, in a concession to the British weather, will now be mostly covered.1