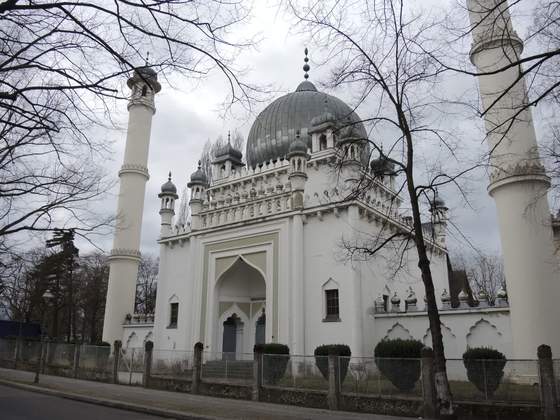 Share
The Berlin Mosque is the oldest currently extant mosque in Germany.  According to Gerdien Jonker, there are very few traces of any Muslim presence in Germany prior to the 20th century, and the first mosque in the country was a wooden structure built outside of Berlin by Muslim prisoners of war during the First World War.  It was demolished in 1923.1

By that time the Lahore Ahmadiyya Movement for the Propagation of Islam had already began planning a mosque, having dispatched Hazrat Maulana Sadr-ud-Din Maulvi Abdul Majid M.A. to Germany.  Land was purchased in July 1923, and construction began in 1924 on a mosque designed by KA Herrmann in the Mughal style, a "Mini Taj Mahal," with a neighboring house serving as a residence for the imam.  The mosque is built on a square foundation, 14.17 x 14.17 m, and a central dome with a height of approximately 23 m, and two minarets each approximately 27.4 m high. The Imam's house is a two-story villa.  At the end of World War II German machine gunners took up positions in the minarets, and were fired on by Russian forces.  The minarets and dome were badly damaged.

The mosque was restored with funds from the Berlin Monuments Department and the Lahore Ahmadiyya Movement and reopened in 1952. The mosque has been a registered historic building since 1993. Renovations were carried out in two phases, the first in 1995 the second in 1996, Juegren Lampaitl was the architect.
--Michael A. Toler, Archnet Content Manager
June 2015