The courtyard house, is a common typology in Islamic residential architecture. Its plan, as a unit, is repeated to form the dense continuous urban structure punctuated with mosques, madrasas, baths and civic buildings. It provides for privacy of the family, while not compromising the need for open spaces in hot climates.

The urban fabric of historic Aleppo is made entirely of courtyard houses that fill in the walled city. spilling outside its gates towards the Christian Djdeideh district to the north. Most of these houses are still in use today, although many have been modified to accommodate new public functions such as orphanages, schools, cultural centers and restaurants.

The principal elements of courtyard houses are as follows:

An open courtyard around which the rooms of the house are organized. This courtyard is usually planted for shade and has a water source to provide humidity. It is the family gathering space that is protected from the eyes of outsiders.

The iwan, a covered loggia that opens onto the courtyard, usually facing north to achieve maximum cooling. This semi-room provides a completely shaded area with excellent ventilation.

The exterior façade is usually stark and bare with a few upper windows facing the narrow street. This provides privacy and insulates the house from the heat and dust. The upper floor openings are usually covered by a mashrabiyeh, a lattice screen made of small wooden rods. The lattice screen breaks up the light to eliminate glare and allows for women to view the street without being seen.

Exterior walls are usually very thick (up to two meters) and covered with stone from both sides, with filler between the two layers. This heavy weight envelope achieves a great level of insulation, cooling the space during the summer season and heating it up during the winter.

Roofs are usually flat, allowing use for sleeping in the hottest months.

Many of the intramural courtyard houses in Aleppo date back to the sixteenth and seventeenth centuries, while the extra-mural examples were built during the eighteenth and nineteenth centuries under the Ottomans. The Ottoman style houses are structurally better preserved, as they were isolated from the neglect and dilapidation of the inner city fabric after migration of people out of the city center to the newer extensions of Aleppo. The abandonment and misuse of the houses for small industries and the overpopulation in many residences resulted in the loss of valuable architectural elements in the older houses. Now, in the early twenty first century, great efforts are spent to rehabilitate Old Aleppo and restore both the built forms of the fabric and the quality of life of the residents of these houses. The flexibility inherent in the courtyard house design accommodates modern innovation and adaptive reuse programs, enhancing the city's historic urban environment. 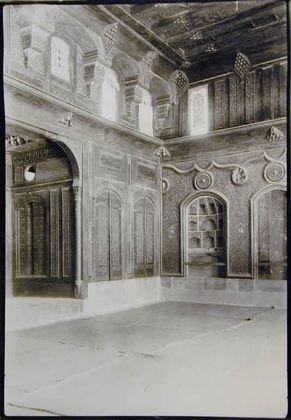