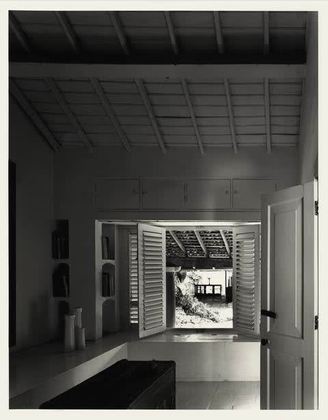 Share
Over the course of nearly forty years, architect Geoffrey Bawa renovated a series of bungalows in Colombo into a unique, spatially complex, and eclectically furnished personal residence. Located at the end of 33rd Lane near the University of Colombo in Kollupitiya, the residence is a collage of indoor and outdoor living rooms hybridizing courtyard house and tower house typologies. The complicated sequence of spaces retains traces of its original configuration as a private row of four compact bungalows. Bawa used his own home as a canvas for architectural experimentation, testing formal or spatial techniques in the ever-evolving composition of the residence before he articulated them in projects for other clients. The result of Bawa’s constant innovation and addition to the residence is a home that masterfully blends the two architectural traditions from which Bawa drew heavily: twentieth-century European Modernism and traditional Sri Lankan design.

The overall site is nearly rectangular in shape, measuring between 50 and 52 feet (approximately 15 to 16 meters) wide north-south and 120 feet (approximately 36 meters) deep east-west. In keeping with Bawa’s design for 33rd Lane, this article provides building dimensions in feet. The total ground area of the site is slightly over 6000 square feet. The western edge of the property borders the last fifty feet of the eastern side of 33rd Lane, a small cul-de-sac that extends one block to the south of Bagatelle Road. The north-south (transverse) axis of the site is oriented along the edge of 33rd Lane, which is rotated fifteen degrees counter-clockwise from the north-south meridian. Before Bawa combined four subplots to create this larger parcel, a six-foot-wide side lane occupied the entire northern edge of the site, allowing access to the units that did not directly border 33rd Lane.

Developed over a span of several decades, the final plan of the residence is a complex sequence of dozens of small rooms, patios, and gardens. The residence can be subdivided into three discrete units: the ground floor residence, the tower, and the ground floor guest suite or office. One-third of the site at the ground level, or approximately two thousand square feet, is given over to a dozen courtyard gardens that vary greatly in size. These unroofed spaces range from small planters or pools tucked in the corners of hallways to a generous walled patio wrapping the eastern end of the property.

In 1959 Bawa purchased the third property in a row of four bungalows at the end of 33rd Lane. During the first two years of his residence there, Bawa lived in a compact flat that he designed on the forty-four-foot-wide and thirty-foot-long parcel. The plan of the unit included a sitting room, kitchen, garden courtyard, master bedroom, and a bedroom for his lifelong attendant Miguel. Bawa acquired the fourth lot on the private lane in 1961 and then designed additional indoor and outdoor living spaces on the fifty-foot-wide and thirty-six-foot long property. He was able to purchase the first two bungalows between his property and 33rd Lane seven years later, and at that point he began another round of extensive renovations of the four-parcel site.

The portion of the residence built on what were originally the third and fourth parcels in the row remained largely unchanged after the annexation of the first two properties. The most significant change to the eastern half of the house was its slight expansion westward; the wall between the second and third parcels was shifted six feet to the west in order to increase the size of the master suite and gardens that bordered the east side of the original property line. The side lane that previously connected 33rd Lane to the double house on the third and fourth parcels was enclosed and transformed into a corridor leading from the street to the primary living spaces at the rear of the residence. This corridor is naturally lit by a series of four small courtyard gardens along its length.

Apart from the corridor that passes through the northernmost six feet of its area, the second parcel is occupied by two-thirds of a large guest suite. The other third of the guest suite covers the southern half of the first parcel adjacent to 33rd Lane. The unit features its own one-car garage, private entry, living and dining spaces, and a large bedroom suite. Covering approximately 1600 square feet in total, this apartment is physically separated from Bawa’s primary residence by a snaking interior wall. The exception to the strict divide between units is a playful visual connection through a narrow slip in the wall between the private gardens adjacent to the guest bedroom and Bawa’s master suite. During Bawa’s final years in the late 1990s, the guest suite was transformed into an architectural office in which his practice was based.

The northern half of the parcel adjacent to 33rd Lane contains a large two-car garage within the entry hall of the main residence, placing Bawa’s prized antique cars on display. A small winding staircase is located along the wall between the guest suite and this entryway, providing access from both the main house and the guest unit to the third major section of the home, the tower. The tower rises above the enclosed areas of the first parcel, measuring between twenty-nine and forty feet wide and between twelve and twenty-four feet long. The first level of the tower houses a library, additional bedroom and bath, and a small south-facing porch that overlooks the guest suite’s entry garden on the ground level. The second level of the tower is partially shaded by an overhanging roof plane, but only the staircase leading up to this level is actually enclosed, as a small penthouse surrounds the stair to protect the interiors below from the weather. A narrow outdoor stairway wraps around the eastern side of the penthouse, leading to a forty-foot-wide and twelve-foot-long rooftop terrace. After Bawa suffered a stroke in 1998, an elevator was added to the tower so that he could continue to access and enjoy its living spaces and elevated gardens.

The architectural articulation and material palette of the home is muted in order to allow the structure to serve as a clean backdrop for Bawa’s impressive collection of art and architectural artifacts. The continuity of the white cement floors and the white plastered walls and ceilings unifies dozens of inserted objets d’art representing diverse periods, styles, and traditions. The simple lines of the architecture itself, the collection of modern furniture, and the narrative sequencing of the plan recall the European Modernism of Le Corbusier’s Maison Citrohan (1927); the deep verandahs, the traditionally-crafted decorative artifacts, and the immediacy of the outdoors in each space reveal the strong influence of local Sri Lankan architectural traditions. Non-structural antique wooden columns, reclaimed stone floor tiles bordering small interior gardens, and painted double-doors by Australian artist Donald Friend enliven the clean white entrance corridor. The technique of bricolage is continued throughout the home, with Bawa’s permanent collection of sculptures, tapestries, paintings, and ornate salvaged millwork placed throughout the home and gardens. The gardens themselves become another form of decoration, their color and variety animating the white corridors of the ground floor and the spare concrete terraces of the tower.

The house on 33rd Lane has been maintained since Bawa’s death in 2003 by the Lunuganga Trust, a private trust formed in 1994 to provide continuing public access to Bawa’s two residences. The house is open for public viewing Monday through Friday, and guided architectural tours are available with an appointment.

Robson, David. 2001. Genius of the Place: The Buildings and Landscapes of Geoffrey Bawa. In Modernity and Community: Architecture in the Islamic World. Thames & Hudson and The Aga Khan Award for Architecture, 37.