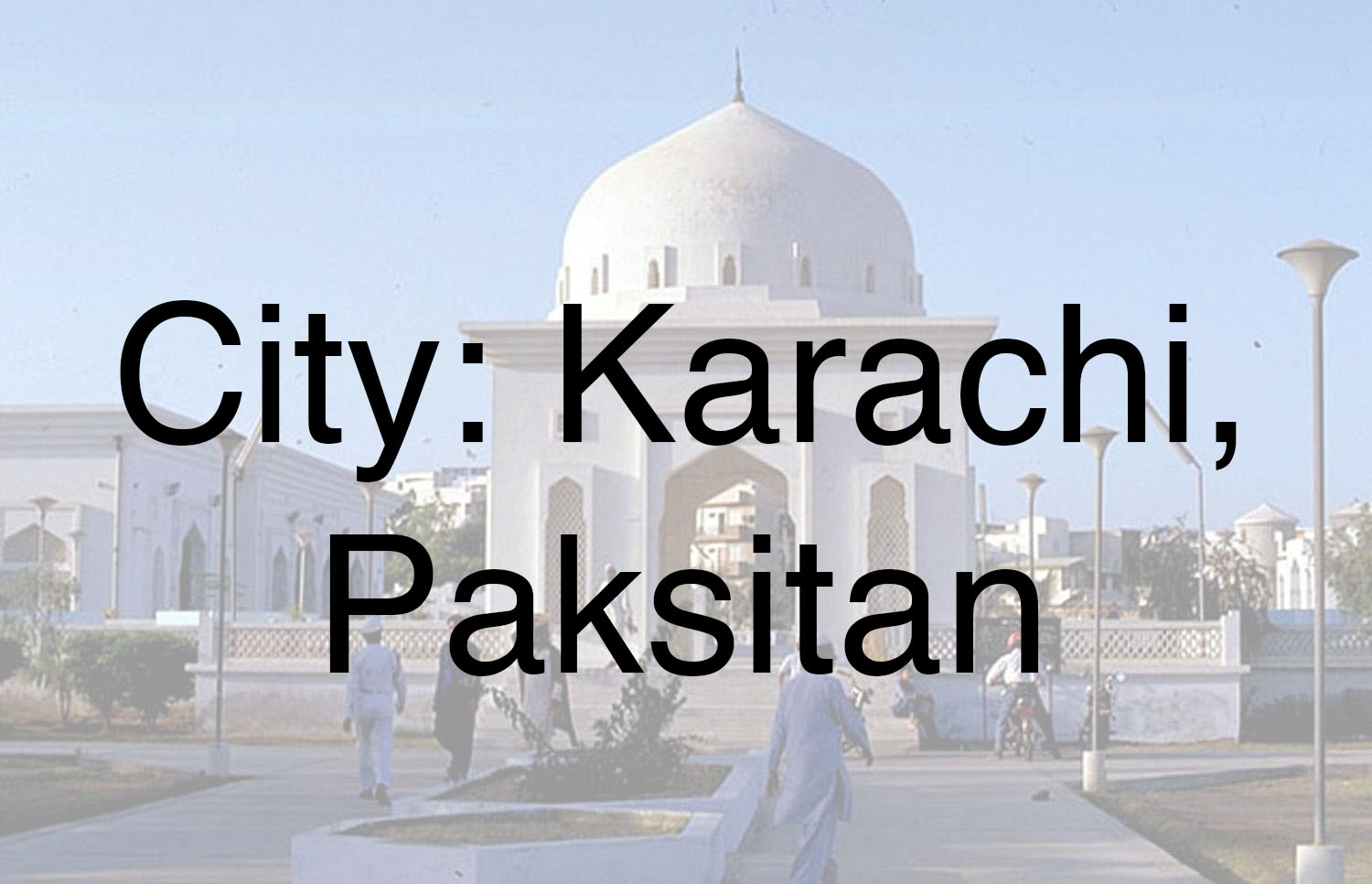 Due to its geographical location on a bay, Karachi is a primary seaport and commercial center of Pakistan. It is one of the fastest growing cities of the subcontinent. After independence in 1947, Karachi became the capital of Pakistan till 1959, when Islamabad was selected to serve as the new capital city.

Though still debated, it is asserted that Karachi was the city of  'Crocola' or 'Krokala', which was Alexander's south Asian equivalent to Alexandria. According to historian Henry Elliot, Karachi is the ancient city of Debal or Dewal, 'the Temple' where Muhammad Bin Qasim landed. The name was acquired from the position the temple commanded at the promontory which was calculated to attract the gaze and reverence of the passing mariner.

The foundation of present day Karachi was established in the eighteenth century when the silting up of the Lari Bunder, the most important port of Sind, forced the fishermen of Kharak Bundar in 1729 to move to a small fishing village of Dirbo. This village was named after a fisher and became known as Kalachi-jo-Ghote (village of Kalachi) or Mai Kalochi.

The village expanded rapidly to become an important trading post. Fortifications were built with two main entrances, Mitha and Khara Darwazas. The prosperity was an attraction for many, and in 1794, despite valiant efforts of the Hindu and Muslim merchants, Karachi fell to the third siege laid by the Talpurs. Karachi, however, continued to prosper and attract merchants from all over the world. On September 29, 1799, the East India Company established its first factory. Karachi became important to British interest because of its position on the sea, it proximity to the river Indus, and its potential for trade as the gateway to the rest of Sind and Punjab. Conflict between the ruling Amirs of Karachi and the British was a constant feature until the British took over on February 2, 1839.

Prior to its annexation by the British, Karachi shared some of the spatial characteristics of better-established indigenous cities like Thatta and Hyderabad. The city had grown organically with narrow streets and small semi-public, semi-private spaces contained within mud brick architecture.  Both Muslims and Hindus played prominent roles in the history of the city. Commercial and residential buildings and places of worship were intermixed and provided the residents convenient access to places of work and worship. The city was divided into mohallahs, where masjids and Hindu temples acted as the foci, while the Jumma bazaar held the central position of the city. The bazaar cut across from the Khara Darvaza in the west to the Mitha Darwaza at the eastern fortification wall. Neither the walls nor the darvazas survive today, however the area of the city known as Mitha Dar and Khara Dar still exist to remind the inhabitants of the origins of the city.

The city began to develop along parallel paths with the establishment of British rule. The concept of the 'Duel' city had a distinct impact on the spatial character of the city - the 'indigenous' or 'black' town and the 'modern' or 'white' town. The arrival of troops of the Kumpany Bahadur in 1839 spawned the foundation of the new section, the military cantonment. The cantonment formed the basis of the 'white' city where the Indians were not allowed free access. The 'white' town was modeled after English industrial parent-cities where work and residential spaces were separated, as were residential from recreational places.

Karachi was divided into two major poles. The 'black' town in the northwest now enlarged to accommodate the burgeoning Indian mercantile population comprised of the Old Town, Napier Market and Bunder, while the 'white' town in the southeast comprised the Staff lines, Frere Hall, Masonic lodge, Sind Club, Governor House and the Collectors Kutchery [Law Court] located in the Civil Lines Quarter. Saddar bazaar area and Empress Market were used by the 'white' population, while the Serai Quarter served the needs of the 'black' town.

The British wanted to model their Empire along the lines of ancient Rome and classical architecture was considered most appropriate for built monuments of the Raj. As T. Roger Smith, the Bombay architect maintained, the language of Raj architecture ought to be European since the British administration was advocating European Laws and ways of life to their Indian Empire. A European style of architecture also served as a distinct symbol of British authority and could be used as a rallying point for the British rulers to earn the respect and admiration of the natives of India.

The architectural character of Karachi was largely determined by amateur dabbling of administrators and engineers who used pattern books and architectural treatises and were influenced by corresponding contemporary popular revivals in England. The underlying cause of the blind adoption of styles was the lack of trained architects.

Karachi acquired its first neo-Gothic or Indo-Gothic building when Frere Hall was completed. James Strachan, Engineer and Secretary, became the most significant architect of the city. During the 1880s, he began experimenting with Indo-Gothic style. He is most well known for the Empress Market, which even today is one of the main markets of the city and St. Patrick's Cathedral.

English Tudor style was introduced in Karachi Gymkhana and the Boat Club. Italian Renaissance was very popular and was the language used for St. Joseph's Convent (1870) and the Sind Club (1883).

Classical style made a comeback in the late nineteenth century as seen in Lady Dufferin Hospital (1898) and the Cantonment Railway station. While 'Italianate' buildings remained poplar, an eclectic blend termed Indo-Saracenic or Anglo-Mughal also began to emerge in some locations. It is significant that the period in which Indo-Saracenic developed coincided with the stirrings of nationalist movements and the rise of Indian nationalism. Anglo-Mughal style was now considered more appropriate by the rulers to demonstrate their awareness of the cultural heritage of the subcontinent in the hopes of pacifying the rising tide of nationalism. Successful elements in this style are the arches, drooping chattris, minarets and cupolas.

The local mercantile community began acquiring impressive mercantile structures. Elphinstone Street in Saddar area is an example where the mercantile groups adopted the 'Italianate' and Indo-Saracenic style to demonstrate their familiarity with western culture and their own. The Hindu Gymkhana (1925) is an example of Mughal revival buildings. A Muslim architect, Agha drew his inspiration from Mughal architecture, the massing and plan was based on the tomb of Itamad-ud-Daulah in Agra. Mohatta Palace was also done by Agha in the Mughal revival style.

The spatial segregation of indigenous populations was strictly controlled though land ownership rights, and it was only after the First World War that upper class Indians were allowed to reside in the prestigious quarters of the city. The Bombay Town Planning Act of 1915 gave Karachi Municipality the impetus for proposing schemes for suburban areas. These included the Garden Quarter Town, Soldier Bazaar and Lyari Quarter. Much of the development of the residential sector at this time was due to the popularity of the corporative housing movement led by the well-known Parsi Mayor of Karachi, Jamshed Nusserwanjee to whose credit is what was probably the first planned residential area for the growing middle class, this area was later named Jamshed Quarters after him.

The separation of Sind from the Bombay Presidency in 1936, and declaration of Karachi as the newly created province's capital was, in part, a reason for the city's construction boom. The municipality enthusiastically responded to the challenge and new areas were developed to accommodate the influx of people. In spite of a large numbers of migrants to the city, Karachi was reputed for being the cleanest city in this period. It was known for its clean, broad streets, its health and sanitation, as well as its parks and recreation grounds, libraries, hospitals and maternity homes, schools and cultural institutions. Due to his efforts, Jamshed Nusserwanjee is remembered as the "Maker of Modern Karachi'.

Karachi has remained the hub of all commercial and cultural activities, a city of opportunities and tall buildings. The architecture of post-Independence was still heavily influenced by the colonial style. While the 1980's saw modernism and post-modernism factoring in the cityscape, architecture was, and remains, largely neglected.