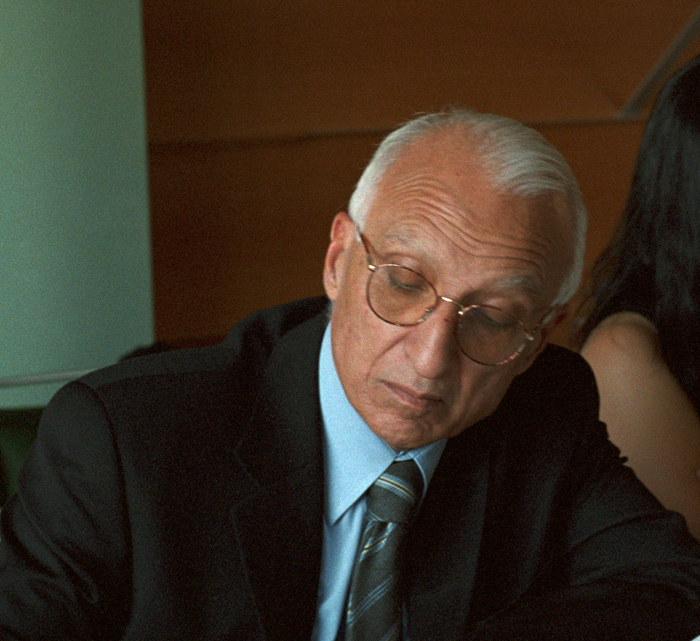 The late Jordanian architect Jafar Tukan (view his collection) was born in Jerusalem in 1938, and went to school at al-Najah National College in Nablus before joining the American University in Beirut (AUB) in 1955, graduating in 1960.

He worked upon graduating from AUB at the Jordanian Ministry of Public Works as a design architect, and then joined the firm Dar al-Handasah Consulting Engineers at their head offices in Beirut. In 1968, he established a private practice in Beirut, and in 1973, formed the partnership Rais and Tukan Architects, which later became Jafar Tukan and Partners Architects and Engineers, and was relocated to Amman, Jordan following the Lebanese Civil war during the mid-1970s. In 2003, Jafar Tukan and Partners Architects and Engineers merged with the Jordanian firm Consolidated Consultants for Engineering and the Environment.

His work extended to include nearly all aspects of architecture and planning. He designed a number of important projects in Jordan and also in other countries including Lebanon, Palestine, and the United Arab Emirates, and his designs are widely recognized in Jordan and the Middle East. He collaborated with internationally-recognized architects and architectural offices such as Kenzo Tange, with whom he worked during the late 1970s and early 1980s on the design of the Jordan University for Science and Technology campus in Irbid.

His notable projects include the Ayshah Bakkar Mosque in Beirut (1971), the Amman City Hall, which he designed in collaboration with Jordanian architect Rasem Badran (1997), the Jubilee High School in Amman (1999), and the SOS Children's Village in Aqaba, Jordan (1991) for which he received the Aga Khan Award for Architecture in 2001.

He was the recipient of numerous awards, which in addition to the Aga Khan Award for Architecture, included the Architectural Engineer Award of the Arab Cities Organization for the years 1993 and 2002, and the Palestine Prize for Architecture. His work was featured in numerous architectural magazines and is the subject of the monograph Jafar Tukan Architecture (Melfi: Libria, 2001).

In addition to his architectural accomplishments, Jafar Tukan was active in professional architectural organizations and also in public service. Among other activities, he served as a member of the Master Jury of the Aga Khan Award for Architecture, the Board of Trustees of the University of Jordan, the Municipal Council of the Greater Amman Municipality, the Executive Board of the Jordan National Gallery of Fine Arts, and the Executive Board of the SOS Children's Villages in Jordan.

Additional information on Jafar Tukan is available through the following links:

This Arabic-language documentary film presents an overview of the life of the late architect Jafar Tukan. In the video Jafar Tukan speaks about important events that took place in his life. The documentary also includes interviews with his colleagues, his wife, and his son who speak about his daily habits, his family life, his architectural thinking, and his various achievements. Watch the video.

Source: Center for the Study of the Built Environment (CSBE)