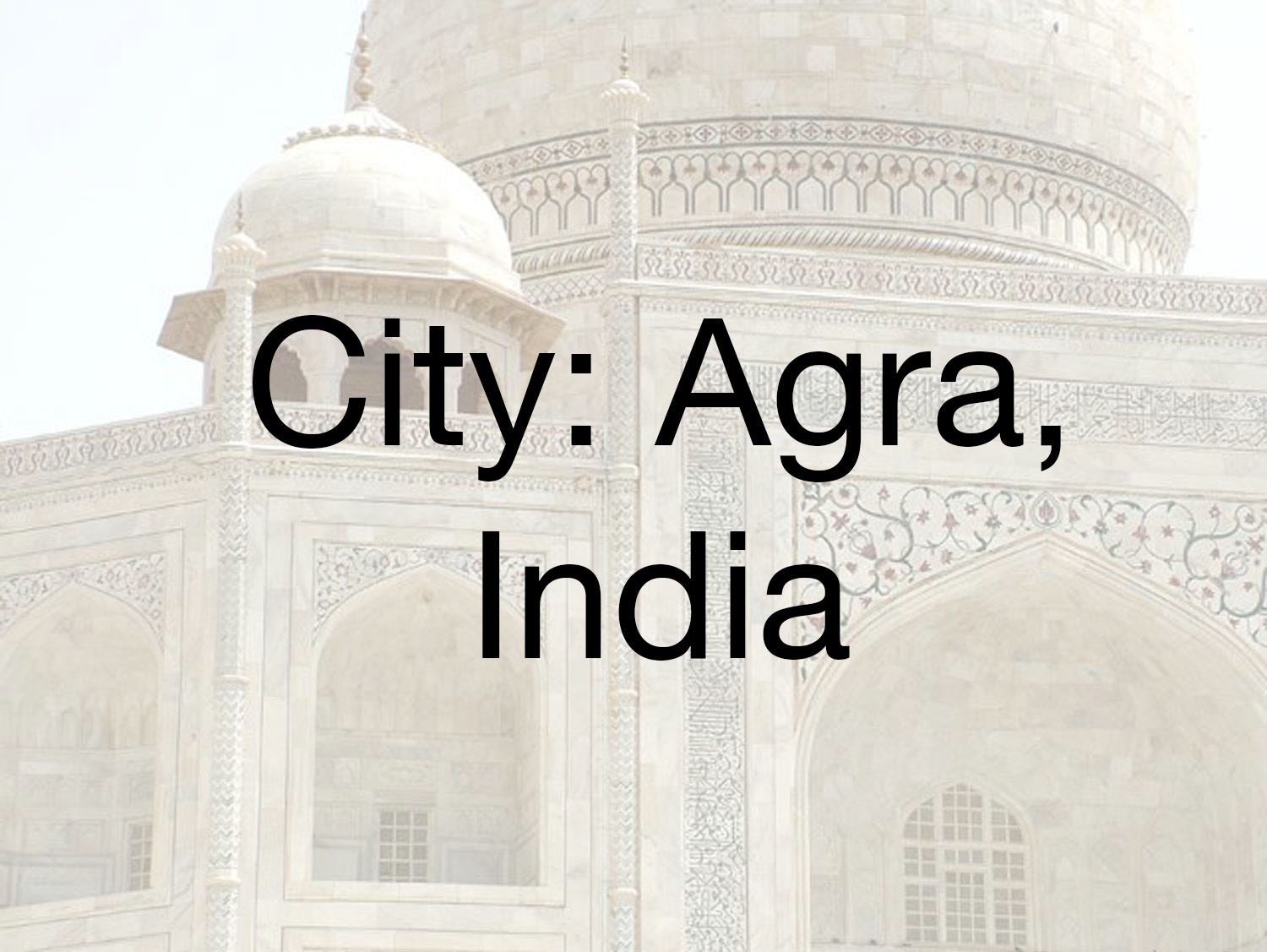 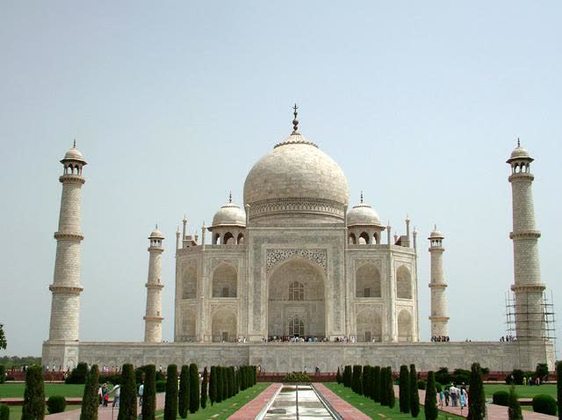 Share
The mausoleum of Mumtaz Mahal, the central part of the Taj Mahal funerary complex, is located at at the north end of the complex next to the bank of the Yamuna river. It is approached from the south by entering through one of three gates into the jilaukhana, or forecourt, then through the great gate darwaza-i rauza into the south end of the garden. The mausoleum lies at the north end of the chahar bagh-style garden upon a two-part plinth, the riverfront terrace. Also based on the plinth are the mosque and mihmankhana, found to the west and east, respectively. These two structures mirror one another.

In historic accounts of the Taj Mahal complex, the riverfront terrace supporting the mausoleum has been referred to as the kursi, or throne. This terrace, and the marble plinth upon it, supports the mosque, mausoleum and the mihmankhana. Its north (river-facing) elevation is clad in red sandstone and framed with marble inlay and displays a series of now-infilled arches. The vegetal motifs carved on the wall are enlarged versions of those that appear on the mausoleum, the mihmankhana and the mosque. These arches were originally open to the Yamuna river, allowing light and ventilation to reach the inner tahkhana rooms within. The tahkhana, a gallery of rooms arranged in a row and connected by a narrow corridor, is reached by two staircases that descend from openings in the surface of the plinth to the east and west of the mausoleum. The tahkhana rooms are also connected internally by small passages and are said to have served the visiting emperor and his entourage.

The secondary, square marble plinth, 93 meters long, is centered on the sandstone terrace. The mausoleum proper and the four minarets flanking it are placed on this marble plinth. The base of the plinth is decorated with delicate carvings of vegetal motifs, which also appear on the white marble cladding of the mausoleum. A string of moulded leaves outlines the top of this plinth.

At the north end of the garden is the mausoleum of Mumtaz Mahal (rauza-i munauwara, rauza-i muqqadas, rauza-i mutahhara), the central element of the Taj Mahal complex. The plan of the mausoleum is based on the nine-fold hasht-bihisht (eight paradises) plan often employed by the Mughals for tomb and pavilion design in the 16th and early 17th centuries. In this system, a square plan is divided into nine spaces: a central chamber with four additional spaces in the center of each elevation and four rooms at each corner.

In the mausoleum of the Taj Mahal complex, the central chamber is double-height and octagonal in plan. At its center rest the cenotaphs of Mumtaz Mahal and Shah Jahan. The chamber is capped by a shallow dome and decorated with niches on each two-story wall. These niches on the cardinal axes have jali screens, fitted on the external faces of the walls, which allow light into the room. The niches on the diagonal axes hold rectangular doors. The niches are separated into lower and upper stories by an inscription band that runs around the interior. The upper and lower niches are identical but for the frames on the lower niches. On the upper level, these frames are replaced by muqarnas that begin to transform the octagonal plan into a circular ring for the dome. The shallow dome, which is the lower portion of the double dome used for construction, thus appears as decorated with an extended pattern of the muqarnas that support its base.

Ambulatory rooms (shish mahal) are placed on the cardinal axes of the octagonal tomb chamber on both stories. Cruciform in plan, the walls and ceilings of the shish mahal rooms are composed of of glass-filled decorative patterns. These rooms are not accessible to visitors.

The floor of the tomb chamber is tiled with octagonal marble stars in alternating cruciform modules, each outlined with inlaid black stone. The delicate marble screen that currently surrounds the cenotaphs of Shah Jahan and Mumtaz was set up in 1643 in place of the original gold-enameled one that was made in 1633 on the second anniversary (urs) of Mumtaz's death. Each side of this marble octagonal screen is divided into three panels; only one opens to access the cenotaph. The screen replicates the outer structure of the tomb and echoes its architectural forms, including its engaged shafts and inlay work. Pietra dura work in precious stones fills the opaque surfaces of the screen.

The lower tomb chamber, which is now closed to the public, can be reached by a pointed barrel vault staircase that lies to the south of the cenotaph. This chamber is completely clad in marble with an undecorated ceiling and contains Mumtaz's cenotaph, on a lightly decorated platform, placed beside Shah Jahan's cenotaph, which is also more simply decorated than its counterpart on the upper story.

On the roof of the mausoleum is a high drum, topped with a bulbous dome measuring 25.6 meters high by 17.6 meters wide. Four diagonally placed chhatris flank the drum. The terrace provides a view of the garden below; it is accessed by staircases from the ground floor that lie on either side of the entrance to the mausoleum.

The four elevations reflect the symmetry of the mausoleum's plan. Each major (N,E,S,W) elevation is similar; each is divided into three frames, with a central pishtaq measuring 32.6 meters in height. The two frames flanking the central pishtaq contain blind arched niches on the upper and lower levels. Each corner of the building presents a chamfered elevation (to the northeast, northwest, southeast, and southwest).

The interiors of the four central pishtaqs are adorned with floral mouldings conjecturally inspired by European paintings of the 16th and 17th century (Shah Jahan's artisans were notably familiar with the works of their European contemporaries). The frame of the mausoleum's central pishtaqs, as with other similar forms within the complex, is decorated with an inlaid thuluth inscription of a Quranic verse. At the pishtaq's highest point is a linear pattern of floral motifs running between two extended engaged columns capped with guldastas. The spandrels of the pishtaq are also filled with an inlaid mirror-symmetrical arabesque pattern in red, green and dark yellow stones, and the pointed arch of the frame is outlined with rope-form moldings.

The two faces framing each central pishtaq (sub-pishtaqs) contain blind niches on both stories; these niches are rectangular in plan. (In contrast, the niches within the chamfered corner faces of the mausoleum are half-octagons in plan). As compared to the larger central pishtaqs, these two sub-pishtaqs are less elaborately treated, with pilasters on the outer elevations decorated with an inlaid herringbone pattern in black and dark yellow. These pilasters are flanked by square panels, framed with horizontal and vertical chevrons, at their base.

Four marble-clad minarets flank the mausoleum, one at each corner of the mausoleum plinth. Minaret additions were not prevalent in Mughal building until the 17th century, and can also be seen in the gateway of Akbar's tomb in Sikandra, as an addition, and at the tomb of Itmad-ud Daula in Agra. In both cases, the minarets were still not detached from the main structures.

Each minaret at the Taj Mahal mausoleum contains an internal winding staircase made of rough sandstone that accesses its roof. Each of the minarets also has three projecting balconies accessible by a door on each level, and is topped with a chhatri supported by slender columns and multi-cusped arches. Each chhatri is capped with a kalasa finial. The minarets all have a slight outward tilt, believed to be a design measure intended to protect the main mausoleum from damage should a minaret collapse.

Nath, Ram. 1972. The Immortal Taj Mahal: the Evolution of the Tomb in Mughal Architecture. Bombay: D. B. Taraporevala Sons.