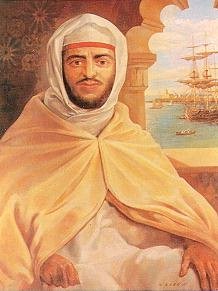 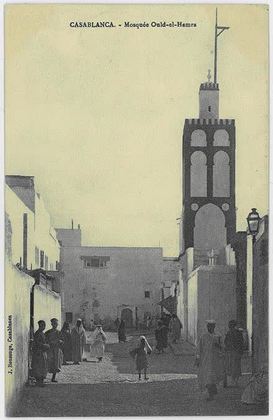 Share
The Ould el-Hamra Mosque is located along the Boulevard des Almohades at the northern edge of the old medina of Casablanca, which was constructed by the 'Alawi sultan Muhammad bin 'Abdallah between 1757 and 1790. Construction of the mosque began during 'Abdallah's reign, as 'Abdallah commissioned major building projects in Casablanca and across Morocco. The minaret was constructed later than the rest of the mosque, after the death of 'Abdallah.

Little is written about the mosque of Ould al-Hamra, except in reference to its proximity to several other area landmarks in the Casablanca medina, including the Bab el-Marsa, the surviving portions of the Almohad ramparts, and the private residences of Lyautey and Mohamed Benjelloun. The mosque is a rectangle 40 meters long on its north-south axis and 28 meters wide on its east-west axis. The minaret is located at the northwest corner of the mosque, and the prayer hall is to the south of the building, with the qibla wall rotated approximately 40 degrees from the east-west axis. A set of stairs and an elevated public plaza along one side of the mosque provides access not only to the mosque itself but also to the dense residential neighborhood of the old medina that it borders.

The portal of the mosque that survives from 'Abdallah's time and the minaret are the most noteworthy architectural features of the mosque today, as the rest of the complex has fallen into disrepair. The portal is located at a corner of the mosque complex, opening from the street directly into the courtyard of the mosque. The sidewalk that separates the wall of the mosque from the street is only half a meter wide where the portal is introduced, and thus the experience of the threshold between the mosque and its exterior is condensed into a very compact space. The portal features a pointed horseshoe arch of stone with decorative carving in simple geometric patterns along its length. Inside the arched opening is a massive wooden door with metal hardware and minimal carved decoration that can be closed to provide a complete physical and visual barrier to entry into courtyard of the mosque beyond. The spandrel between the arch and the lightly sculpted stone cornice above is of unadorned white stucco, with a lantern projecting from the spandrel surface on each side of the arched opening. A second cornice above the first undecorated stone band wraps around the corner of the mosque wall and is carved with a series of reliefs of vertically oriented rectangles capped with pointed arches. A third projected band projects out above this second cornice, with a sculpted bottom edge that completes the figures of the relief carving of the band below. A green tile roof projects out slightly above the third cornice and also wraps around the corner of the mosque, extending the depth of the threshold space into the area of the sidewalk.

The form of the minaret of Ould el-Hamra follows the typical form of Moroccan minarets. It is composed of a large square shaft that rises to approximately four-fifths of the height of the structure and terminates in a gallery level, from which rises a smaller square shaft that is topped by a cupola and finial. The structure of the minaret is of brick with infill panels of stucco on each side of the shaft that subdivide each elevation into five legible levels. Each level has a different type of fenestration and ornamentation, but generally there are only minimal openings into the interior of the shaft, and very little ornamentation. The only decoration of the main shaft of the minaret is in the form of blind arches either carved into the stucco panels or formed of cut bricks laid over the stucco. Both the main shaft and the smaller secondary shaft terminate in stone parapets that are carved to resemble balustrades with blind openings. The upper balustrade is topped by a white stucco pyramid, which in turn is capped by a white metal finial of three stacked spheres. Overall, the minaret has an austere white stucco appearance that matches the plain white exterior of the mosque walls, punctuated by moments at each corner and floor level where the brick structure beneath is revealed.

The Ould el-Hamra mosque stands in Casablanca today as an example of the type of religious architecture that was prevalent in Morocco at the end of the eighteenth century during the reign of 'Abdallah. Today the portal that survives from the original mosque is one of only a few surviving structures in Casablanca from 'Abdallah's time, the period when the old medina was first formed.