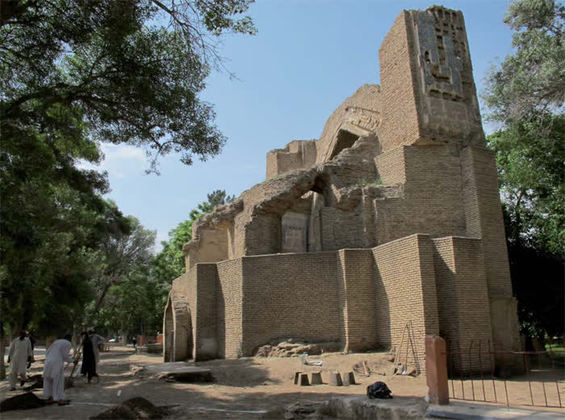 The Madrasa was a significant structure in the area, with the wafiya noting that “it comprises lofty arches and vaulted niches, a majestic portal, a central courtyard and two large domed rooms, one of which is intended as a lecture hall. The Madrasa also has 150 hojras (living chambers) on two floors.” Tile work was extensively designed in the banna’i technique. The madrasa itself is believed to be paired with the Mazar of Khwaja Abu Nasr Parsa Shrine, a common technique in the Uzbek and Timurid time periods that intended for one structure to mirror and eclipse another.

Originally the main gate (iwan) of a expansive madrasa, one of the largest religious structures in Timurid Balkh (with two floors, extensive living chambers and 24 salaries positions), the remains of the structure are in a dilapidated state and require urgent conservation. The damaged facades retain only a fraction of the glazed tiles that once decorated the whole structure. The consolidation of this gate structure will ensure that another of the few remaining historic structures (above ground) in the centre of Balkh is consolidated and incorporated into the wider conservation initiative. Located at the eastern perimeter of the Park, directly opposite the Khwaja Parsa Shrine on the western edge, following its conservation the gate of the madrassa could potentially be used as the main public access into the garden. In order for this to occur, the structure and the valuable glazed tiles would have to be protected, ensuring that falling debris does not injure pedestrians. 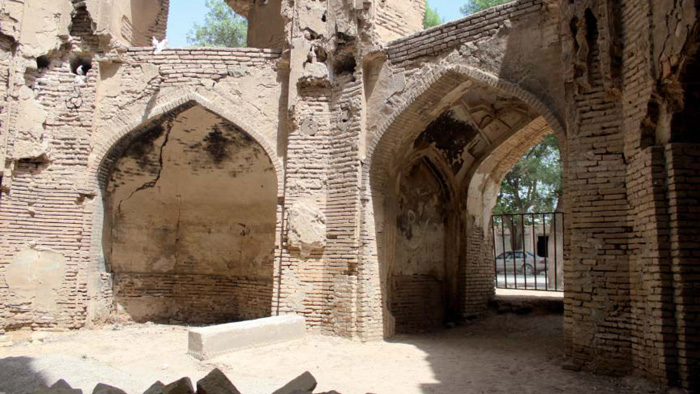