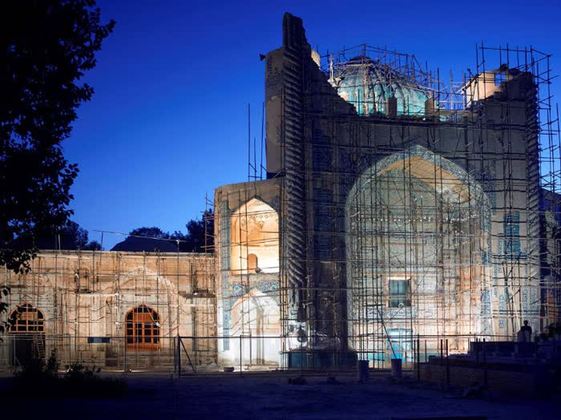 With support from the German Federal Foreign office, the early 16th century shrine of Abu Nasr Khwaja Parsa and a complex of historic structures, located in a public park at the centre of Balkh were identified as requiring urgent conservation and landscaping works .The Khwaja Parsa Conservation and Landscaping Project has entailed the following area of works:

The Khwaja Parsa shrine has undergone extensive transformations over the course of the 20th century and as part of the restoration works detailed documentation of the existing conditions and design for the restoration of the monument were prepared. Intrusive and ill-conceived interventions on or adjacent to the monument were carefully removed, revealing the original features of the building. The brick masonry dome above the shrine required structural stabilization, which was carried out using traditional techniques and materials and, where appropriate, the masonry was strengthened using reinforced glass-fiber mesh. Large areas of the roof covering the Shrine were cleared of debris and repaired in order to prevent the seepage of water and moisture.

The glazed tiles covering the dome were in a state of disrepair having been carried out to low-standards over the past decade. In order to retile the ribbed dome using high-quality glazed tiles and to consolidate the tiled muqarnas decoration at the base of the ribbeddome, a traditional kiln was constructed adjacent to the site. Craftsmen familiar with tilemaking were identification and trained in the use of traditional materials and techniques required to produce authentic high-quality colour glazed tiles. Following the preparation of times and the testing of application methods that would guaranteed resistance to heat and cold, specially trained craftsmen began the complicated task of applying more than 700 meters square glazed tiles on the 52 individual ribs of the 14 meter-diameter dome. Accurate forms were prepared and constructed enabling the masons to lay large sections of the curved tile surfaces on the ground and in a controlled environment, before being raised and fixed in place above the masonry dome. Once the retiling of the dome was completed, works began on repairing and consolidation the decorated glazed tiles on the drum, minarets and main elevations of the Shrine. Where remaining, historic tiled were cleaned and consolidated, while areas where the tiles has fallen off were cleared of debris and re-filled using a lime based plaster, preventing driving rain and the build-up of ice from damaging the historic tiles in the future.

With the support of local authorities and the Ulema in Balkh and as prescribed in international charters on conservation, a dilapidated modern one-story concrete mosque that was built on the foundations of an historic mosque adjacent to the Shrine was dismantled. In addition to encroaching on an historic monument, the construction of the concrete mosque had resulted in the build-up of moisture at ground-level and beneath the foundations of the Shrine, resulting in significant subsidence under the minarets of the Shrine causing the formation of large cracks in the structure. The previous historic brick-masonry mosque also served the purpose of providing a buttress to the 55 meter high minarets and its removal may have also caused structural damage to the Shrine. As the concrete mosque was constructed in order to meet the demand of worshippers for prayer space, conservation designs included provisions for the reconstruction of the original brick-masonry domed mosque that had previously occupied the site. Sufficient information existed in the form of archaeological evidence and historic photographs to enable an accurate reconstruction of this structure. It was also expected that the reconstruction of the historic mosque to its original design specifications would result in the buttressing of the minarets, reducing the risk their collapse in the future. Enlisting the support of the local community and their representatives, a ceremony was held to commence the process of dismantling the concrete structure. Excavations revealed the footprint of the historic mosque which provided sufficient information on the size and layout of the structure.

The rehabilitation of the landscaping surrounding the park and at the centre of Balkh focused on providing safe access and improved services and facilities for the public. In order to facilitate better access to the park new pathways and stairs were laid using brick masonry and, where appropriate, existing pathways were improved and made ready for use by large numbers of people. Laborers cleared debris from the site, leveled and graded the earth by hand, before laying 12,000 square meters of brick pathways using lime-mortar base and over 780,000 locally produced bricks. In warmer months, weekly markets selling food, spices, and used trinkets are located within the park and this itinerant commercial use of the site required the upgrading and paving of dedicated areas within the park, allocating fixed hard-surfaces for use by large numbers of people in order to avoid damage to trees and plants. The area around the remains of the Subhan Qoli madrassa gate was paved and the once neglected monument was transformed as the main gateway into the park.

The natural landscape was enhanced through the removal of 800m3 of and the clearing of silt deposits from 2000 linear-meters of surface channels, improving the existing gravity-fed irrigation system distributing water to trees, plants and bushes. As part of the landscaping works, more than 700 invasive species of plants and trees were removed and the site was replanted with more than 1200 trees and flowers consisting of indigenous species widely available in the local nurseries such as cypresses, plane trees and roses. A small on-site nursery was established in order to propagate the planting of additional trees in the future. 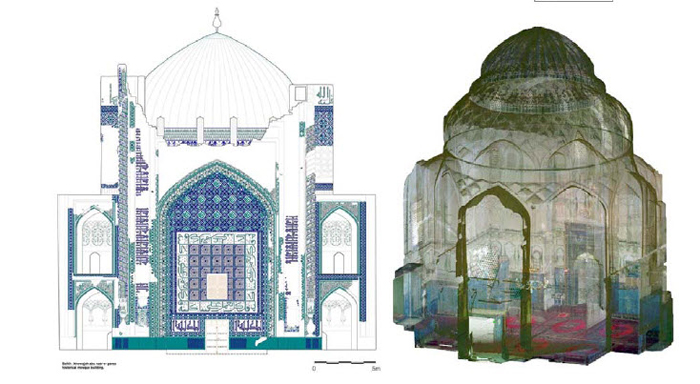