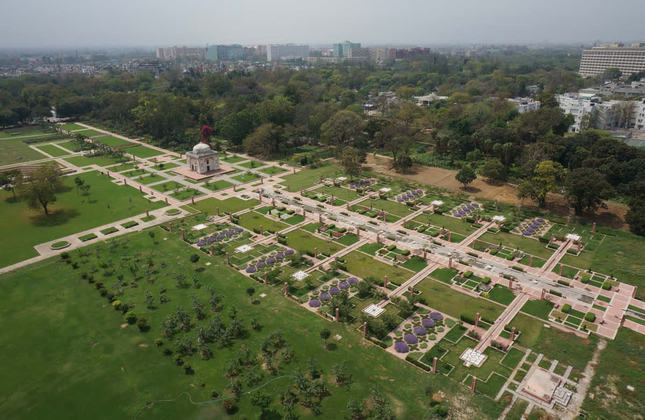 From the 14th century onwards, the Nizamuddin area has seen a profusion of building activity. Serai’s, Tombs, Baoli’s, mosques, lofty gateways, garden pavilions have been built along the River Yamuna. In the 16th century the Grand Trunk road was built through here as were several enclosed garden tombs, including that of Emperor Humayun. The area stretching from Purana Qila as its northern edge and Barahpulla as its southern edge – the first Mughal city of Delhi – was taken over for agriculture by the 19th century.

It was in the early 20th century, during the building of the capitol complex of New Delhi, that Sunder Nursery was established north of Humayun’s Tomb – to propagate saplings for New Delhi’s avenues and experiment with plants brought from other parts of the British empire.

Mohamad Shaheer, the landscape architect, designed this new city park along a central axial spine around which gardens and landscapes are arranged. From formal gardens to informal settings for families to enjoy picnics, the park will offer a variety of recreational and cultural venues. Water features, ponds and lakes are part of the master-plan, which includes nursery beds, a flower showcase, arboretum, rose garden and orchards. The masterplan aimed at achieving a truly urban scale, deriving inspiration from the traditional Indian concept of congruency between nature, garden and utility coupled with environmental conservation.

The grand central vista, over 500 m long, follows the path of the 16th century Grand Trunk Road and connects the entrance zone of the Humayun’s Tomb World Heritage Site with the 16th century Azimganj Serai in the north. The gardens along the central vista, inspired by Mughal traditions, employ monolithic marble fountains and flowing water set amidst geometric flower beds and raised sandstone pathways. Forming the heart of the city park, it is here that visitors are expected to congregate and a large maidan is available for winter picnics. The lake at the northern edge of the central vista will be a refuge for Delhi’s citizens with walks, seating and pavilions along the edges.

Landscape works at Sunder Nursery have been supported by the Norwegian Agency of Foreign Affairs.

Sunder Nursery now serves as Delhi’s first arboretum with AAA tree species, the largest for any Delhi parks. A contiguous stretch of dense green cover across Sunder Nursery continues on to the adjoining National Zoological Park and the Batashewala Complex, providing a protected bird habitat for the ground nesting national bird, the Peacock.

With 20,000 saplings planted here over the past decade, in lieu of the 400 truckloads of construction rubble removed from here, 80 species of birds have already returned to Sunder Nursery with many more expected now that the water bodies are full. 60 species of butterflies have also already made this park their home.

To serve as an educational resource on Delhi’s ecology and attract the 500,000 school children who visit the adjoining Humayun’s Tomb annually, a 20 acre micro-habitat zone created here showcases plants of the ridge, riverine, marshy landscapes that were once found in Delhi.

The conservation works have drawn attention to this being a unique ensemble of 16th century garden tombs. In 2016, of these, UNESCO extended World Heritage designation to twelve structures conserved by the Aga Khan Trust for Culture including six standing within the Sunder Nursery – Lakkar Wala Burj, Sunder Burj, Sunderwala Mahal, Mirza Muzzafar Hussain’s Tomb, Chotta Batashewala and the Unknown Mughal’s tomb.

AKTC has also sought the designation of the Purana Qila – Humayun’s Tomb zone as an archaeological park. Together with the Humayun’s Tomb and Sunder Nursery, the archaeological park would include the Millennium Park, the National Zoological Park and the Purana Qila – thus over 600 acres in extent. It is hoped that in future visitor access would be possible across these sites, thereby truly creating a ‘central park’ for Delhi.

The Sunder Nursery site has served as a plant nursery for 100 years now. 20-acres of Sunder Nursery remain in active nursery use of the Central Public Works Department. Spread across the northern and western edge of the nursery, this would be the largest such facility in central Delhi. Nursery facilities such as mist chambers are now being provided. A ‘garden house’ to showcase tropical and desert flora is also planned.

A specially built facility allows the display of Sunder Nursery’s rich bonsai collection of over 400 plants. It will be an endeavour to further expand this collection to include missing species.

As with the rest of 70-acres, the nursery beds have an irrigation system and electricity network.

The facilities wing of the Humayun’s Tomb Interpretation Centre is presently under construction in the Sunder Nursery and will include lecture rooms, film screenings, food kiosks, souvenir shop and multi-purpose halls for training programmes envisaged as part of the project. A sunken amphitheatre with the monuments in its background has been created to hold cultural evenings and festivals celebrating the local musical traditions. Though access to Sunder Nursery and Humayun’s Tomb is limited on account of a narrow 16th century road leading to the river, 300 parking spaces have been created both within and on the edges of Sunder Nursery. 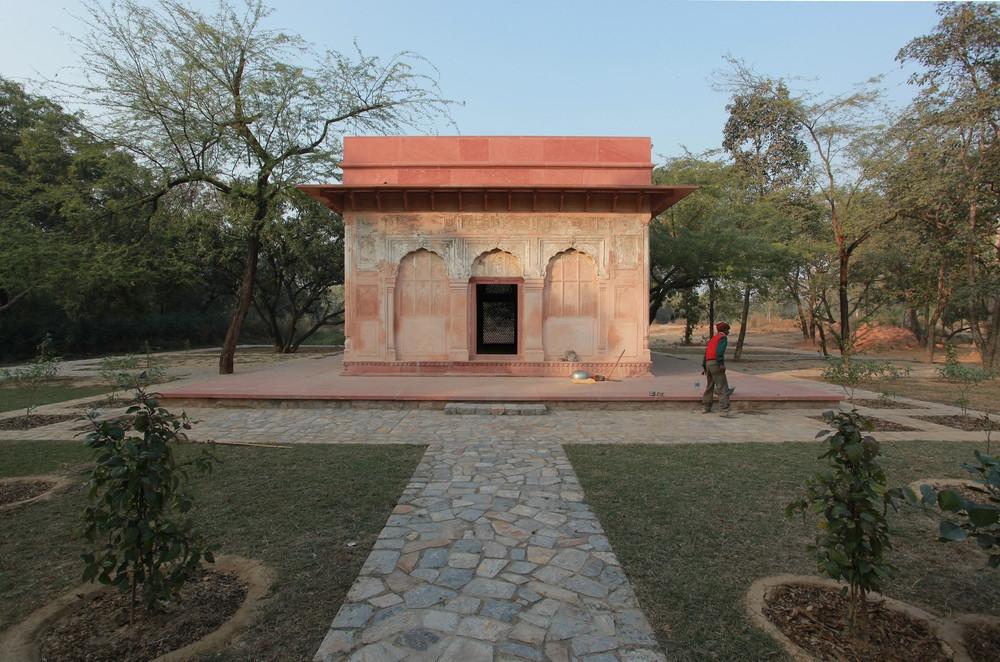