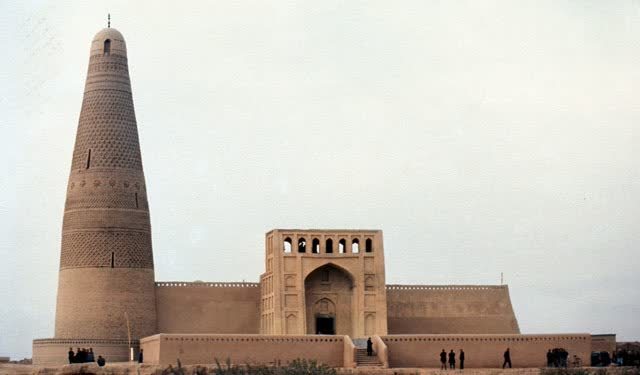 Share
Two kilometers east of the Silk Road town of Turfan stands the Amin Mosque with its monumental minaret, the tallest in China. The mosque was built in 1779 during the Qing Dynasty in memory of the Uygur King Amin Khoja (also known as Imin Khoja, Emin Hejo, or Emin Hedro) by his son King Suleiman. The mosque was alternately known as the Su Gong Ta Mosque, or the Mosque of the Su Minaret with reference to Prince Su. His father, King Amin, who died in 1777, had collaborated with Emperors Yongzheng (1723-1736) and Qianlong (1736-1796) to unify Xinjiang and annexed it to the Chinese between 1756-1759 putting an end to local rebellions. The large fortified mosque, raised on a platform, stands alone outside the city, devoid of any auxiliary buildings. It combines the local Xinjiang hypostyle prayer hall (built of mud brick, with brick patterning and arched niches) with influences from Persia and Central Asia, seen mainly in the domineering pishtaq, or tall projecting portal, and the minaret.

The imposing pishtaq stands at the center of the mosque's eastern elevation and has a large, arched portal niche, similar to portals of mosques, madrasas and tombs stretching from Persia across Central Asia. It is preceded by a protected terrace that is accessed by a single set of stairs from the street. The pishtaq is decorated on its main façade, and on its sides with rectangular panels containing arched niches similar to the portal of the Aitika Mosque in Kashi. The top tier of the panels are pierced with arched windows on all sides creating a narrow, partially enclosed, gallery atop the pishtaq. A domed octagonal vestibule leads from the portal to the prayer hall. To the right of this vestibule is a rectangular hall with a stairway giving access to the roof. To its left, is a narrow corridor flanked by two rooms that give access to the minaret steps.

The prayer hall mostly borrows from the building traditions of the immediate Turfan region. Poplar beams and stone-based poplar columns support the low, flat roof of the large, covered court, which is enveloped by stone galleries on three sides. Two small apertures in the woven vegetal roof of the court allow light into the dimly lit main prayer hall, creating a somber atmosphere. The mihrab is set in a domed room at the center of the qibla wall, with doors to the side galleries and to the main court. The two-bay deep stone galleries surrounding the court recall the structure of Abbasid mosques. Their domes are carried on pointed arches falling on heavy piers. Some bays along the outer ring of the galleries are enclosed into rooms. Unlike the mosques and mausoleums of Kashi, there is minimal sculptural and chromatic decoration inside the King Amin Mosque, which is simply adorned with arched niches carved into the plain mud brick walls. The floor is paved with square cut stone and partially covered with woven mats.

The mihrab chamber is covered with a large conical dome, the drum of which is encircled with windows. The drum sits upon an octagonal base bearing blind arches gracefully aligned with the doorways, corners and the mihrab niche. This western qibla dome is balanced at the eastern end of the prayer hall by the rounded dome of the entry vestibule. A mausoleum in the cemetery adjoining the qibla wall is said to be that of a foreign saint, and is a popular pilgrimage site.

Located at the southeast corner of the mosque, the minaret is the tallest in China at forty-four meters. Its circular shaft measures fourteen meters across and tapers down to 2.8 meters in diameter at the top. The spiraling internal support also serves as a stairway with seventy-two steps for the imam to perform the call to prayer from a room with latticed windows at the top. The ornamental brickwork of the tower consists of fifteen bands of various widths and patterns. The fine precision of the bricklaying creates a rich texture that is reminiscent of the fine brickwork of the world renowned Kalyan, or Poi Minaret in Bukhara. A Uygur architect named Ibrahim is said to have designed the minaret of the Great Mosque of King Amin.

The Great Mosque of King Amin, like other Uygur mosques of the Xinjiang Province, is closer in style and decoration to Uzbek and other Central Asian building traditions than to those of the Hui. The mosque has been closed to prayer since 1992, when it was placed under protection by the Chinese government. 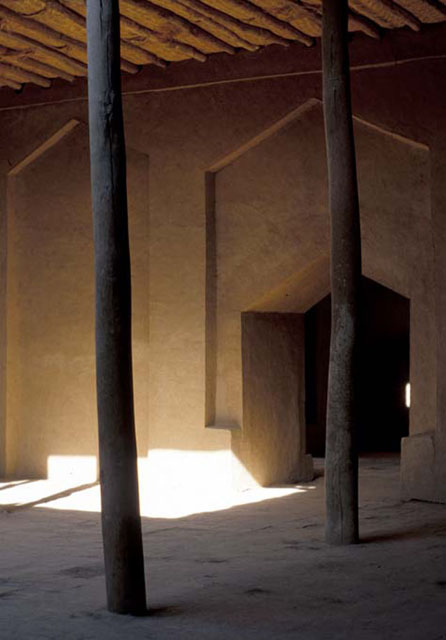