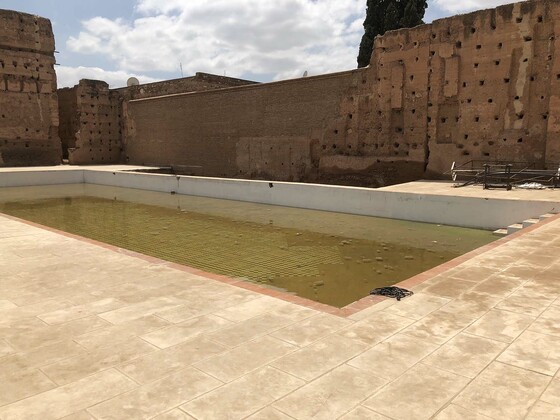 Share
The Badi' Palace is located in the north-east of the kasba of Marrakesh. It was constructed between 1578 and 1594 to serve as the diplomatic palace of Sa'did Sharif Ahmad al-Mansur (reg. 1578-1603). The name of the palace derives from "al-Badi," one of the ninety-nine names of God given in the Koran, which means "the incomparable." While the palace was widely acknowledged in its time as a spectacular architectural achievement, it was plundered for its rich decorative materials only a century after its construction.

The palace is approximately 130 meters wide along its north-south axis and 245 meters long along its east-west axis. The longitudinal axis of the palace is rotated sixteen degrees clockwise from the north-south meridian such that the palace aligns with the major street grid of the surrounding neighborhood. The majority of the interior of the palace is occupied by a vast central courtyard that measures 110 meters to a side. Enclosed pavilions surround and define this courtyard, with corner towers and prominent pavilions in the centers of the east and west elevations.

The courtyard is divided in thirds along its north-south axis. Occupying the central third of the courtyard is a large pool measuring twenty meters wide and ninety-five meters long. This pool is flanked by eight-meter-wide footpaths, then gardens to the north and south. There are two gardens on each side of the pool, separated by an eleven-meter-wide footpath. Each garden is thirty-two meters wide and forty-two meters long. Along the outer edges of the gardens are five-meter-wide footpaths that border the enclosed pavilions of the palace. The west end of the gardens and pool is bordered by a ten-meter-wide path, and the east end is edged by a five-meter wide path.

The central pool was constructed entirely above the ground in order to provide irrigation to the neighboring gardens. As this design elevated the level of the courtyard, the palace pavilions had to be supported by brick arches to raise them to the level of the pool and gardens. For this reason the main reception rooms of the palace sit one story above the street level.

Moroccan architecture during the rule of the Sa'did Sharifs was heavily influenced by Andalusian decorative traditions, and the Badi' Palace is an example of the artistic dialogue between the Islamic cultures in Spain and North Africa. The Badi' Palace borrows from the Alhambra Palace in Grenada in both its ornamentation and overall layout. The plan of the gardens, central pool, and surrounding pavilions is similar to that of Court of the Lions at the Alhambra, but on a much larger scale.

The decoration of the Badi' Palace was notably ornate, consistent with the tendency of the Sa'did Sharifs to commission opulent architectural works as a physical manifestation their wealth and power. The Badi' Palace was decorated so ostentatiously that many contemporary writers remarked that the luxuriousness of the building merited its descriptor "the incomparable." The pathways in the courtyard were paved with multi-colored zellige, or enameled terracotta tiles, in fine geometric patterns. The pavilions surrounding the courtyard were roofed with green terracotta tiles, a common roofing material for the period, and the red clay walls were clad in brick and Carrera marbles. Other rich materials used in the decoration of the palace include onyx, gold-leaf, ivory, and precious woods.

The 'Alawi Sultan Moulay Ismail (reg. 1672-1727) had the palace stripped of the majority of its ornamentation in 1696 in order to reuse the expensive materials to build his palace in the new capital city of Meknès. Simply extracting the decoration from the structure of the palace took ten years to complete. Today the bare structure of the palace and gardens remain, as well as glimpses of the fine zellige that formerly adorned many surfaces of the building. 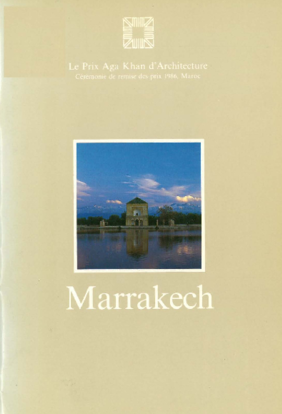