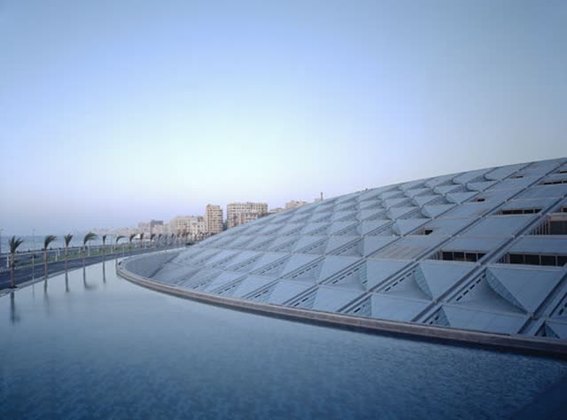 Share
Recipient of the Aga Khan Award for Architecture in 2004.
The Bibliotheca Alexandrina is a revival of the legendary ancient library built in classical Greek times. The rebuilding of the library has returned Alexandria to its former status as a centre for learning and exchange and provided the city with a landmark building. The spirit of international cooperation in which the library was conceived, funded, designed and implemented has been maintained in its management to create an institution that is truly global in its outlook. At the same time, the building is technically outstanding.

Alexandria is Egypt's main port, forming a large industrial and commercial centre and an important summer resort. In 1974, the University of Alexandria began a campaign for the rebuilding of the ancient library, choosing the current site, which is believed to be close to the original location. In 1988, Egypt's President Mubarak took up the project at a national level and an international competition, organized by the Egyptian government in collaboration with the International Union of Architects, was won by the Norwegian company Snohetta in 1989. Detailed archaeological excavations of the site were carried out before construction began in 1995, and the building opened in October 2002.

The library was designed as a tilting disc rising from the ground, with four levels below ground and seven above. The scale of the building is thus minimized at close quarters, so it does not overwhelm the visitor. The facility provides a main reading room with seating for 2,000 readers, six specialist libraries, three museums, seven research centres, three permanent galleries, space for temporary exhibitions, a planetarium, a public plaza, offices, a cafeteria and all the necessary services required for such a complex. The circular form of the library also has strong symbolic significance and an iconic presence. Its exterior wall is clad with four thousand granite blocks carved with letters from the alphabets of the world.

The main reading area is a single open space with eight terraces, each accommodating a different subject section, starting from the roots of knowledge (philosophy, history, religion, geography) and ending with the latest technologies.

The substructure of the library is the most innovative part of the project. The half submersion of the building 18 metres below ground on a site close to the sea raised serious structural problems. Its circular diaphragm wall is considered the largest in the world, with a diameter of 160 metres and a height of 35 metres. The foundations are unique in that they were designed as tension piles with a heavy raft foundation on the south side and as compression piles to take the weight on the north side.

One of the most successful features of the building is its use of natural light, drawn in through glazed panels on the roof. The orientation of the roof panels was carefully studied on computer at the design stage to introduce maximum levels of natural light without direct sunlight.

The library and the planetarium are linked at basement level, beneath a public plaza, to an existing conference centre, while a pedestrian bridge spans the plaza between the university and the coastal road.

Most of the users are students from the University of Alexandria and local schools. Various conferences held in the complex have received regional and international attention, raising the profile of the whole city. The library has also acted as a catalyst for improvements throughout the city, such as renovating roads, building bridges and upgrading hotels. The library is seen as a progressive landmark for the country as a whole, reinstating Egypt on the map as an open, modern centre of cultural exchange.

Jury Citation:
This building has received an Award because it shows an innovative approach to the design and placement of a large, symbolic form on one of the most important waterfronts in the world. From its inception through an international competition to its design and construction by many international companies, and in its current financial management, the project provides a model for other such projects in bringing together the international community and encouraging cooperation and commitment from society as a whole.

While the building is groundbreaking in architectural and technological terms, it also responds sensitively to a wide spectrum of issues, including politics, religion, culture and history. The bold 'tilted disc' forms an icon while delivering a highly formal and monumental building. The technical challenges of constructing such a large development close to the water's edge and within an urban setting have been embraced and dealt with through the use of advanced technologies. The form also provides a clear organization and functions well for the rich variety of programmes it houses, while acting as a catalyst for improvements throughout the city. Finally, the project celebrates learning and brings knowledge to societies across all cultures, playing a crucial role in the progress of civilization. 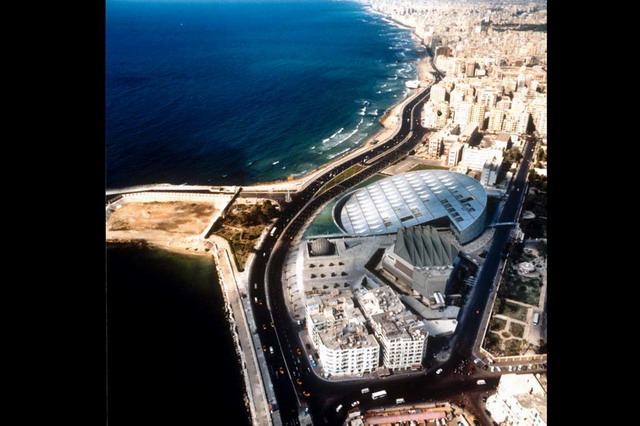