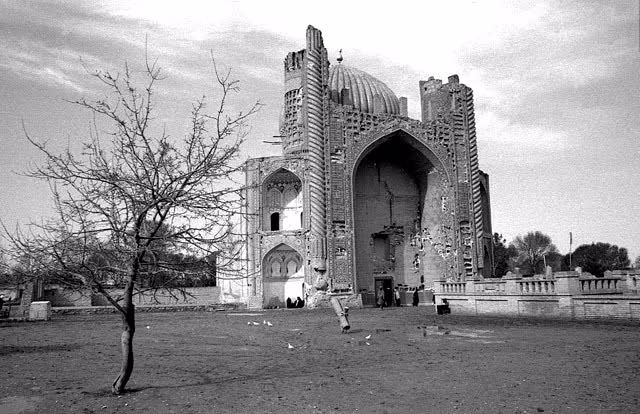 Share
The monument known as the Mazar of Khwaja Abu Nasr Parsa is a grand mausoleum in Balkh, Afghanistan. Abu Nasr Parsa was a spiritual leader of the Naqshbandi order and a theological lecturer in Herat who died in 1459-1460/864 AH or 1460-1461/865 AH. While there is no epigraphic evidence identifying this shrine as the site of Abu Nasr Parsa's tomb, Lisa Golombek and Donald Wilber cite a local tradition maintaining that an unmarked tombstone in front of the portal is the khwaja's grave marker. Another unmarked tomb found in the crypt below the main dome chamber is thought to belong to the patron of the shrine.
Date:
The foundation date of the monument is unclear. In addition to the fact that the monument bears no foundation inscription, it is clear that the building was renovated in antiquity - perhaps substantially - and may never have been completed. Because the building has always been known as Mazar-i Khwaja Abu Nasr Parsa, early authors assumed that it was constructed in the Timurid period, some years after the death of the khwaja ca. 1460/865 AH. Timurid sources including Qadi Sultan Muhammad (d. ) and Khwandamir (d. after 1535-1536/942 AH) also mention a tomb commemorating Abu Nasr Parsa at Balkh, indicating that such an edifice existed in some form in the early 16th/10th century AH. An inscription bearing the date 1597-1598/1005 AH naming the Shaybanid governor of Balkh 'Abd al-Mu'min b. 'Abd-Allah Khan is the earliest date on the building. Scholars have traditionally interpreted this plaque as commemorating a renovation of the tiles, but Bernard O'Kane has argued on stylistic grounds that 'Abd al-Mu'min's renovations may have been very extensive, changing not only the decoration but also the form of the monument.1 The shrine was restored most recently in 1974-75.
Plan:
The plan of the shrine is a chamfered square enveloping a cross-shaped dome chamber aligned with qibla along the southwest-northeast axis. Its elevation is dominated by the monumental portal screen and dome. The long sides of the exterior were carved with eight-meter-deep rectangular iwans, while the chamfered corners had bi-level, five-sided porches; the roofs of the iwans and the upper porches have largely collapsed, exposing the octagonal substructure of the circular drum.
The towering portal screen frames the northeast iwan and is bound on both sides by engaged cabled columns with bulbous bases. Its top section, now collapsed, had an arched gallery that rose taller than the dome. The bi-level porches flanking the portal are topped with minarets, of which the shafts remain. Stairs entered from the corner porches give access to the upper porches, the minarets and the roof. Only fragments have survived of the blue and white mosaic faience and the inscriptive tile bands that once adorned the portal screen and its flanking porches. The dome, its muqarnas base and its drum are also covered with plain, floral and inscriptive tiles dominated by shades of blue.
A small wooden door leads from the northeast iwan into the dome chamber, crowned by a tall umbrella vault. The four arched niches that animate the walls of the chamber at the ground level are doubled in number at the gallery level with the addition of corner arches supporting the dome's pendentives. Sixteen windows placed at the rim of the vault illuminate the interior. The dome chamber has a small mihrab niche on the southwest wall, facilitating its use as a prayer hall.
The crypt directly below the dome chamber has a low vault supported by intersecting arches and pendentives. A column was added later to support the crown of the crypt vault. The platform with tombstones before the main portal was also added at a later date.
Notes:
Sources:

Byron, Robert. "The Shrine of Khwaja Abu Nasr Parsa at Balkh." Bulletin of the American Institute for Persian Art and Archaeology IV, no. 1 (1935): 12-14. 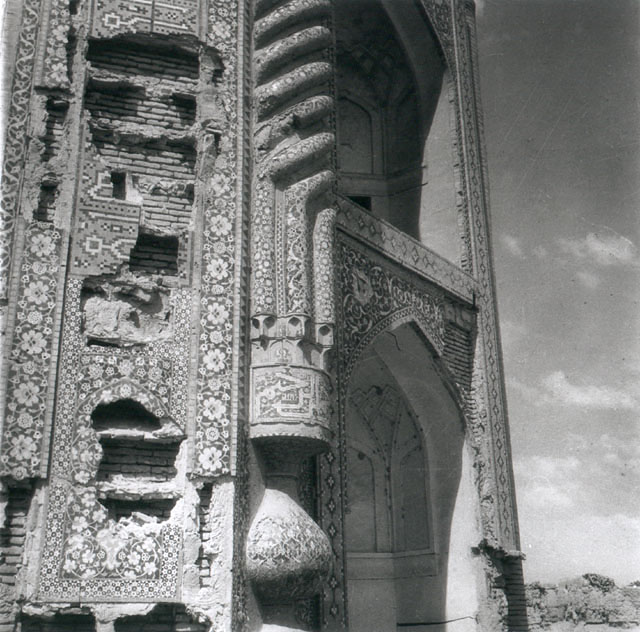