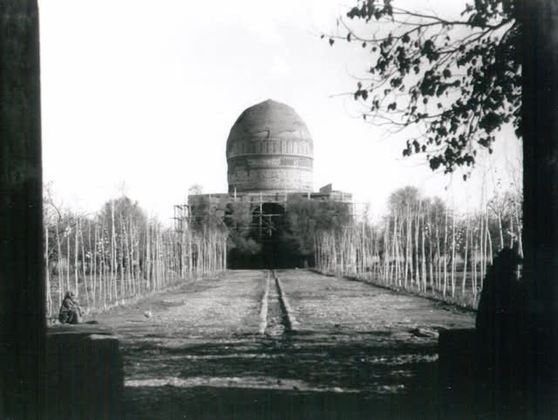 Share
The Mausoleum of Khwaja Rabi' is a shrine built by Shah Abbas in 1621. It is located approximately six and a half kilometers north of the city center of Mashad. Approached by an avenue lined with plane trees, the mausoleum is set within a garden. Khwaja Rabi' is revered for having been one of Ali's companions. As such, a structure must have existed prior to the one built by Shah Abbas.

The mausoleum of Khwaja Rabi' is often grouped by scholars within the traditional Persian architectural typology of the octagonal domed mausoleum, and is believed to be the oldest Safavid version of the type. Since the edges differ greatly in size, however, the plan is best described as a square with chamfered exterior corners. Symmetrical along both axes, it has a large iwan at the center of each of the main elevations, and deep pointed arch niches in each of the chamfered corners. The four iwans lead to the interior domed chamber, and also give access to a room in each of its sides, for a total of eight rooms. These can also be entered directly from the exterior as there are doorways set in pointed arches which flank each of the iwans. Two of the rooms have stairs leading to second story rooms.

The plan reveals that the four iwans are not identical. Two iwans, opposite one another, lead directly to the entrance of the interior space at the back of their walls. The other two narrow towards the back wall with a smaller pointed arch preceding the entrance to the interior. This technique of stepping the walls to break down a volume into various planes and angles is seen again in the articulation of the interior space. Although the dome is supported by four arches set within a square, the interior of the mausoleum does not have the feeling of a square volume. The arches are broken down into smaller recesses, adding angles to the surfaces of the walls. The transition from base to dome is made with multiple offset bearing walls rather than squinches. The double dome is very tall. From the exterior, the height and narrow diameter of the dome contrasts that of the base which seems squat and wide in comparison.

Although much of the decoration is in disrepair, it can be deduced from historical photographs that it was once decorated throughout with tile work. In "The Road to Oxiana," Robert Byron describes the tile work of the mausoleum as containing the colors turquoise, lapis, violet, and yellow.

An inscription reveals that restoration was undertaken by Mirza Sadr ad-Din in 1672. In this inscription, Mirza Sadr ad-Din claims responsibility for the actual construction of the structure. This is, of course, untrue, and there are earlier such inscriptions from Shah Abbas. Another restoration is dated 1707, at which point a neighborhood qanat (subterranean water channel) was also built. Its profits were used for the upkeep of the shrine.

According to Arthur Upham Pope, the form of the mausoleum may have been influenced in part by the design of ancient fire temples. Pope also suggests that the Mausoleum of Khwaja Rabi', with its two stories of open arcades, may have influenced the design of the Taj Mahal.