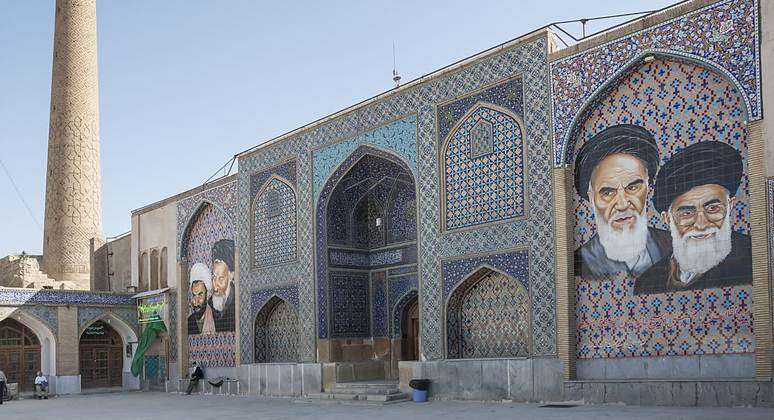 Share
The shrine complex known as Harun-i Vilayat is dedicated to a figure of the same name who is personified by distinguished sets of Muslim believers as different holy personalities, such as the son of the tenth imam, the son of the eleventh imam, the grandson of the sixth imam or the seventh imam. The shrine is reputed for its miraculous powers and venerated by some Armenian Christians. It also greatly influenced Safavid Isfahan's urban design in the sixteenth century. The square of Harun-i Vilayat was the original town center of Isfahan, and is mentioned in documents dating to the first Safavid ruler Shah Ismail's reign till Safavid ruler Shah Abbas I shifted the focus to the grand Maidan-i Shah in 1590.
The shrine complex is oriented toward the qibla (northeast to southwest) and is formed of two main components. Today, a large open courtyard occupies the northeastern half of the complex, giving onto a madrasa/ mausoleum on the southwestern side. This southwestern madrasa/ mausoleum is the earliest part of the shrine, dated by an inscription to 1512-13 CE (918 AH) and attributed to Mirza Shah Husain, a vassal of Durmish Khan Shamlu, Isfahan's governor under Safavid Shah Ismail I. The large northeastern courtyard is a later addition, being absent from historical descriptions of the seventeenth and eighteenth century, possibly dated to the nineteenth century based on architecture style.1
The main entrance to the shrine as it stands today is through a portal that leads off of the newly constructed Imam 'Ali Square onto the courtyard's northeastern side. The northeastern courtyard is surrounded on three sides by aisle-deep arcades. The northeastern facade of the madrasa/mausoleum forms the courtyard's fourth (southwestern) side and its focal point. This was the building's original entrance before the construction of the northeastern courtyard. At the center of this southwestern facade is an ornate entrance portal consisting of an iwan with tile revetment decoration, flanked by decorative niches also clad in tile revetment on both sides. The tile-clad iwan gives onto the madrasa, formed by a court (now roofed) surrounded by cells. Adjacent to the madrasa in the complex's southeastern corner is the mausoleum itself, consisting of an antechamber and an inner tomb chamber, both vaulted, the first with a low dome and the second with an ornate, tile-clad bulbous dome. The tomb chamber contains a mihrab and ornate tile dadoes. The antechamber contains wall paintings featuring figures and communicates both with the northeastern courtyard and with the small street that borders the complex to the southeast through an ornate portal featuring dadoes of glazed brick and tile-clad muqarnas vaulting.
As one of the earliest Safavid buildings, the southwestern mausoleum/madrasa building is Timurid in form but is dominated by the exterior tile decoration of its tomb chamber dome, a phenomenon further encouraged in later Safavid architecture. Best known as an example of tile ornamentation of domes and panels in Isfahan, the building is also remarkable for its intriguing murals and unusual degree of naturalism in its arabesque. The inner shrine is now often used as a religious theater for staging passion plays and thus is only accessible during performances. The continued reverence for the shrine has ensured its upkeep, though excessive traffic has taken its toll on the intricate tile panels.
Notes:
1. Gaube and Wirth, Der Bazar von Isfahan, 230.
Sources:
Blake, Stephen. Half the World: The Social Architecture of Safavid Isfahan, 1590-1722. Costa Mesa, CA: Mazda Publishers, 1999. 169, 170.
Gaube, Heinz and Eugen Wirth. Der Bazar von Isfahan. Wiesbaden: Dr. Ludwig Reichert, 1978. Cat. No. 289.
Hutt, Anthony and Leonard Harrow. Iran. Islamic Architecture. London: Scorpion Publishers, 1978. 70-71.
Lockhart, Laurence. Persian Cities. London: Luzac & Company, 1960. 31.
"Shrine of Haroun Vilayat." Isfahan Webserver Last modified December 20, 1998. http://www.isfahan.org.uk/vilayat/vilayat.html. [Accessed August 14, 2013]
Additional information:
http://iranshahrpedia.ir/view/14225
Record updates: 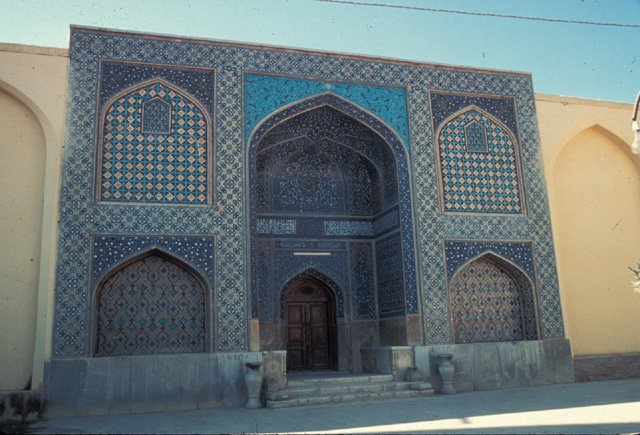