Share
Abaqa's Hunting Palace was a palace outpost built between 1270 and 1275 by Abaqa Khan (1265-1282) on a site that had been important and built upon as early as the Sassanian dynasty. Takht-i Sulaiman was known as Saturiq during the Il-Khanid period and as Shiz during Sassanian times. It is believed to have been the birthplace of Zoroaster, and it was there that the sacred fire temple of Adhure Gushnasp, which provided the fire for other fire temples, was found. The site, atop an extinct volcano 2150 meters above sea level, is located 200 miles south of Tabriz and southeast of Lake Urmia. The extinct crater of the volcano formed a lake atop the plateau measuring from 75 to 160 meters. Programmatically, the palace served as a summer retreat, recalling the yaylaq, or summer pastures, of Mongol nomads, albeit in permanent and monumental form. Only ruins of the site remain today; these were excavated in 1959 and 1978 by the German Archaeological Institute.

A fortified wall with semi-cylindrical bastions at regular intervals surrounds the entire site, forming an oval that dates from as early as the Sassanian period. The core of the Sassanian buildings was located to the north of the oval and reached through a gate at the north of the fortified wall. Although some of Abaqa Khan's Il-Khanid buildings were constructed on the foundations of the earlier Sassanian buildings, the complex of the palace proper was built further south, within the oval, not integrating the Sassanian core to its north. The northern gate was blocked and turned into an iwan, and another gate was made on axis with it to the south; this long portal gate became the only point of entry to the palace.

The entire complex is oriented in a south-southeast direction, apparently in relation to a long-established Mongol preference of erecting tents in that direction to maximize sun exposure. The courtyard palace stands towards the southern side of the fortified oval enclosure. It was was based on a four-iwan courtyard plan, albeit with variations. Containing the lake within its walls, the arcaded palace perimeter walls measured approximately 120 by 148 meters, making it one of the largest in Iran. The most important variation to the four-iwan plan is the location of the two lateral east and west iwans at the northern edge of the lateral walls rather than at the center. At the center of the north iwan is a large staircase that leads to a square domed structure, a chahar taq, enclosed by a wall. The west iwan is 17 meters deep and leads to a transverse rectangular hall that is flanked by a domed octagonal chamber to the north and to the south. A series of rooms abut the west courtyard perimeter wall, including a dodecagon to the north, a four-iwan structure with a domed central space, and a four-iwan structure with a central courtyard. There are also three enclosed four arch square structures on the site, one located to the north of the palace, one to the west and one to the east adjoining the courtyard wall.

Entered through a gate at the south of the oval fortified walls, a long portal composed of two large rectangular enclosures precede the southern iwan of the palace courtyard. The courtyard itself is lined with an arcade on all sides. On the northern side of the lake, on axis with the south iwan, is the north iwan. Serving as the ceremonial iwan, it contained a large staircase at its center that led to the chahar taq, enclosed by a wall. The main component of the palace as built by Abaqa Khan is the cluster of buildings that are connected to the west iwan. This part of the palace was almost certainly the residential quarters. The deep iwan leads into a rectangular hall that gives access to a domed octagonal hall to the north and to the south, while a semi-octagonal structure projects from it to the west. Although the program attributed to each chamber has not been ascertained, they may have served as banquet and reception halls and sleeping chambers. Likewise, the function of the series of structures abutting the west wall of the place is uncertain. However, considering the serial procession required to access the dodecagon structure to the north, it may have functioned as the treasury.

Remnants of various decoration types and techniques were found at the site, including green marble tile flooring, glazed tiles with accents of gold in star and geometric shapes, tiles depicting Chinese motifs such as the dragon and the phoenix, and inscription bands with verses from the Shahnama, the national epic of Persia. Remnants of stucco muqarnas vaults, particularly in the west iwan, were also found. A stucco plaque showing a geometrical drawing for the construction of a muqarnas vault showed that the technique was already advanced in the Ilkhanid period. Kilns were also found, revealing that at least part of the tile work was done on site.

Lesson 11: Between Portable and Permanent Architecture 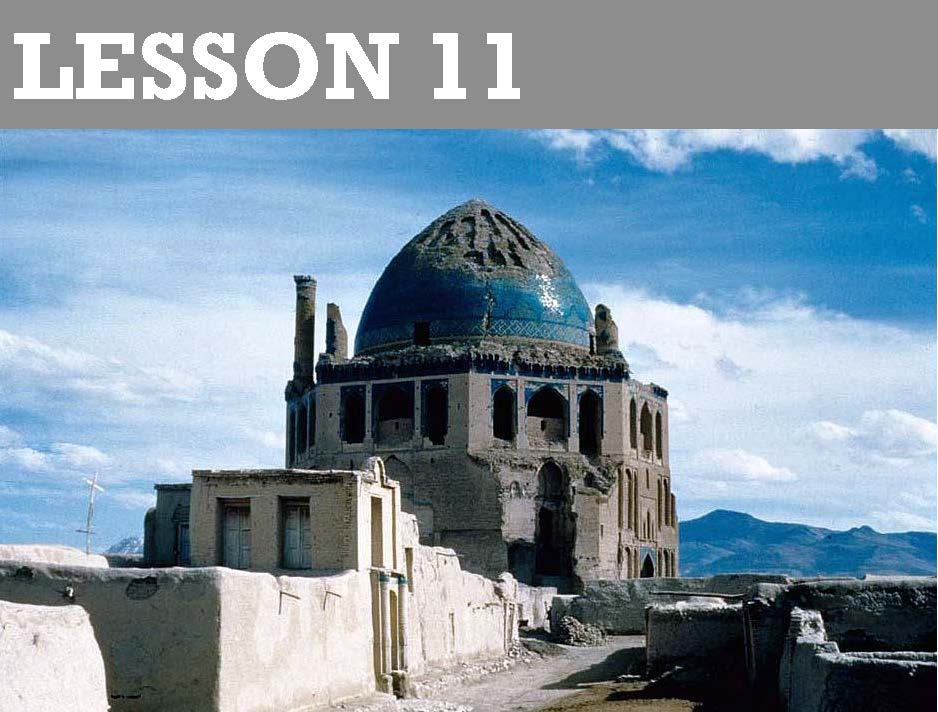 The eleventh lesson in a 22 lesson course on Monuments of Islamic Architecture developed by Professors Gulru Necipoglu and David Roxburgh at the Aga Khan Program for Islamic Architecture at Harvard University. This lesson will explore how new kinds of cities and palaces developed under the Mongols to reflect forms of cultural and artistic adaptations and assimilations.

Another part of what we will focus on today involves the very close connections that are established between Qubilai Khan, the Great Khan of China and Mongolia, and the lands of Greater Iran ruled over by the Ilkhanid dynasty founded by Hülegü, Qubilai Khan’s brother.

How does urban planning in contemporary China compare and contrast with Iran?