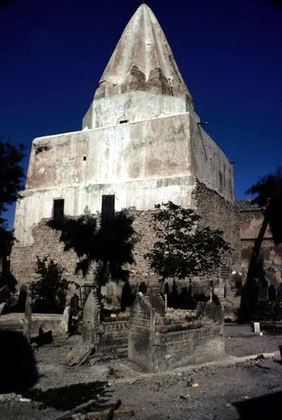 Share
The mausoleum was located in a residential neighborhood of Mosul, in a cemetery surrounded by houses. It was built in 1248 by the Atabeg of Mosul Badr al-Din Lu'lu to house the tomb of Imam Ibn Hasan Awn al-Din, a descendant of Ali ibn Abi Talib through his son Hasan. The structure underwent several restorations, the first of which took place in 1744, followed by another in 1776. During the last restoration works in 1964, the exterior was covered with plaster, hiding the external decorations. At 30 meters high, the mausoleum is the tallest in Iraq.
Construction materials for the structure included stone, marble, rubble and brick. The lower portion of the square structure was built of regular ashlar stone, while the upper part of the four walls was made of rubble stone topped with a one meter brick band; the dome itself was built with bricks.
The mausoleum's exterior form was composed of a cube, topped by a recessed cube, which forms the support for the octagonal base of a twelve-sided dome. The relationship between the two inset cubes was articulated in 1964 when the building was covered with plaster. The lower part was apparently covered with a thicker layer of plaster while the upper one holding the brick decoration was covered with a thin layer of white plaster.
On top of the cube, the octagonal base of the multi-ribbed, pyramidal dome had tetrahedral projections on four of its sides, transforming its footprint on the square structure underneath to a twelve-sided intersection, ensuring a smoother transition from square to circle. Rectangular windows punctured four sides of the octagonal base (the axis points of the four walls of the structure) admitting light to the internal space of the dome. This resulted in a conical external shape with twelve ribs following the twelve subdivisions of the lower part of the base.
The mausoleum was entered on its north side through an elaborately decorated portal preceded by a three bay arched portico sitting on four columns. The door (3.5 by 2.1 meters) is framed with several bands of marble carving ranging from interlaced rope motifs to floral designs and palmettes, belted with a line of inscriptions bearing the name of Badr al-Din Lu'lu'. The frame has a very shallow arch and a lintel underneath held on small spandrels on the sides minimizing the lintel span. The original door is of carved copper with intricate geometric patterns and the architect's name. This original door was replaced by a new one with minimal decoration while the original was placed in a museum.
The inside space was accessed by nine steps going down to the tomb chamber. It is composed of a single room of 8.4 by 8.5 by 14 meters under a muqarnas stucco dome (part of which is torn down) sitting on muqarnas squinches and decorated with complex polyhedral shapes related to Iraqi types. The vertical walls are punctured by two rectangular windows not centered on the walls. They are located at the uppermost part of the lower square structure, lighting the interior space just below the dome's decoration. Among the muqarnas were decorations made of blue, red, and dark red mosaic tiles. Below the twelve-sided muqarnas, on the upper-most part of the walls were a series of 16 arches, four on each wall, two of which admit light to the internal space. Below this series of arches runs a frieze of rosettes.
The mihrab was located in the southwest corner and consisted of two panels that joined at the corner to form one niche. Decorations included extensive floral motifs and an inscription band again revealing the name of Badr al-Din Lu'lu and its date of construction in 1248. A one meter wide black marble band with inscriptions and large palmette motifs rises from the floor along the wall. These panels were made in 1328 by Hajj Hassan. The sarcophagus of the imam is made of wood, carved with floral motifs and holds an inscription to Badr al-Din Lu'lu.
On the east side of the dome chamber, an ornate portal led to a side iwan. This iwan housed a private cemetery for Ottoman Pashas and relatives. It was rectangular in shape covered by a barrel vault. It was probably added to the structure at a later period. The structure of the poral is a shallow arch with a lintel underneath displaying two stalactite decorations on its lower side and two spandrels on the sides minimizing the lintel span, as is similarly the case for the external gate frame of the mausoleum. The frame also has a band of inscription running along its three sides. The existing external wall is stucco (currently ruined at some points) and has no sign of the decorations that appear in older photographs or drawings, where external decoration above doors, and windows covered by musharrabiyya.
The site was reported destroyed as of July 25, 2014.
Sources:
Al-Janab Tariq Jawad. Studies in Medieval Iraqi Architecture, Baghdad, Ministry of culture and Information, State Organization of Antiquities and Heritage. 1982
Hillenbrand Robert. Islamic Architecture, form function and meaning. Edinburgh : Edinburgh University Press, 1994.
Oriental Institute of the Academy of Arts and Sciences of the Czech Republic. "Ohrožená architektura města Mosulu/Monuments of Mosul in Danger." http://www.orient.cas.cz/miranda2/m2/akce/aktuality/Mosul-Islamic-preliminary-list-of-destroyed-buildings-appendix-1.pdf. Accessed October 12, 2016.
Uluçam, Abdüsselam. Irak'taki Türk Mimari Eserleri. Ankara: Kültür Bakanligi, 1989. 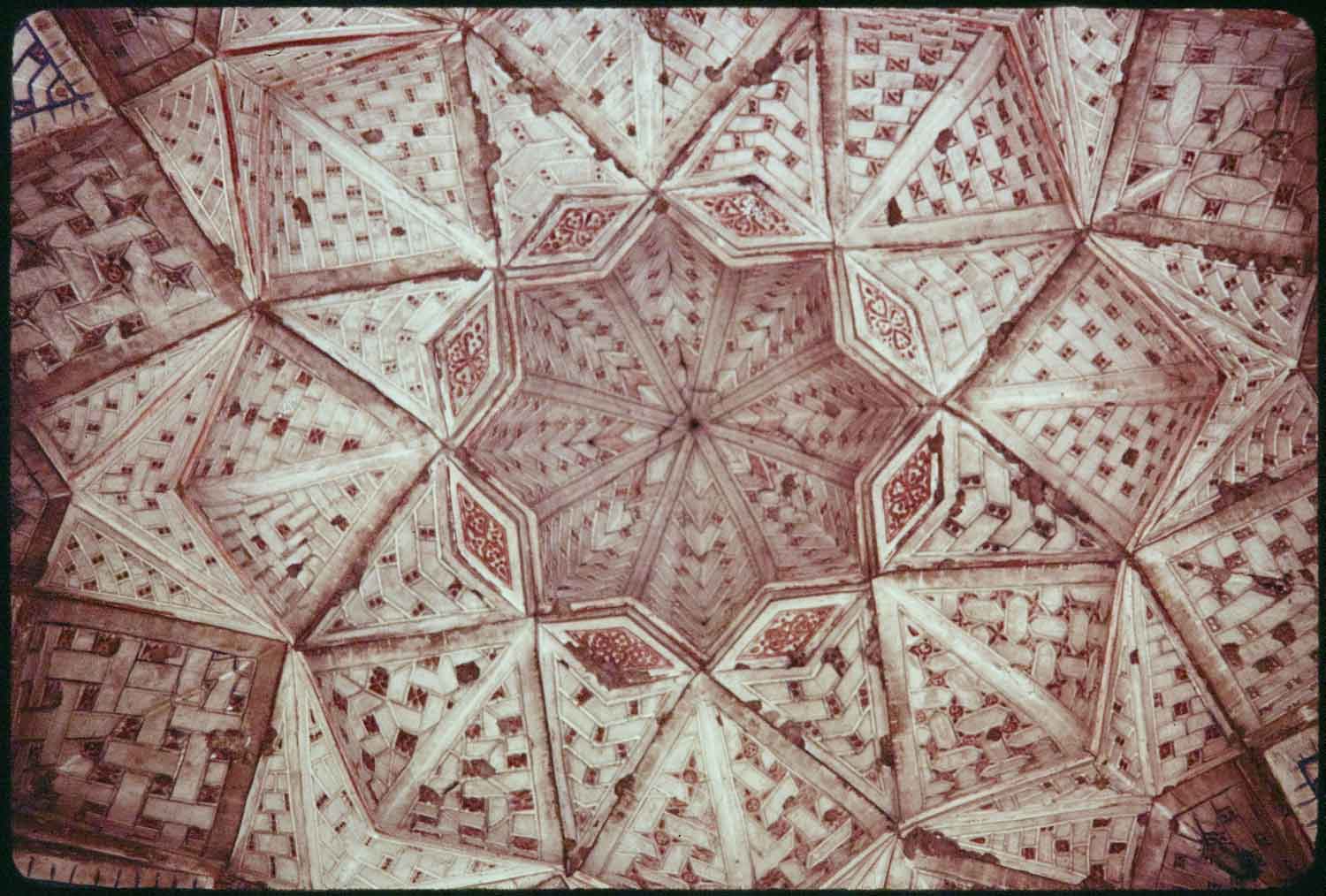