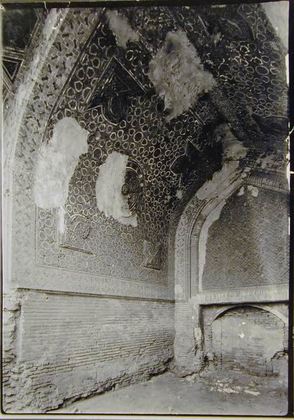 Share
This two-storied, brick historic monument is situated close to the left bank of the Tigris River in the Maydan neighborhood of Baghdad. While there is much contention over the original date of the site, stylistically it was probably constructed during al-Mustansir's caliphate, dating it to the late Abbasid period (1175-1230). Only part of the building remains, but excavations and restoration efforts provide evidence that it most likely functioned as a madrasa rather than a palace.
The building was probably a rectangular complex centered on a courtyard oriented east to west. The main entrance to the building is on its west side, which faced the River Tigris. The portal consists of an elaborate recessed iwan with a muqarnas vault. A door at the back of the iwan leads onto a small vestibule taking the form of a blind iwan with doorways on its two side walls (north and south), which lead onto corridors wrapping around the vestibule. This entryway design, known as ma bayn (in between), preserves privacy by not allowing visual access to the inner quarters through the entrance portal.
The corridors flanking the vestibule lead onto the southwestern corner of the central courtyard, where they emerge under the arcade that surrounds the open court. The arcade consists of shallow bays vaulted with muqarnas and opening onto the courtyard through pointed arches. These lead onto narrow cells, best preserved on the south side, where the full row of seven arches and seven cells is fully preserved. One can assume the same plan on the courtyard’s north side.
On the courtyard's east side, an ornately decorated iwan rising two stories high flanked on either side by two archways leading onto cells. The mouth of the east iwan is a pointed arch framed by a field of geometric ornament based on a star and polygon pattern. Its interior surfaces are also covered with geometric ornament: the rear elevation boasts a strapwork pattern that encloses eight-point stars, while the vault is covered with a complex star and polygon pattern whose fields are further articulated with vine scroll motifs. The west side of the courtyard was almost entirely gone during the excavations of the building, but Herzfeld proposed an iwan opening to the east and mirroring the large eastern iwan on this side of the court.
Sources: 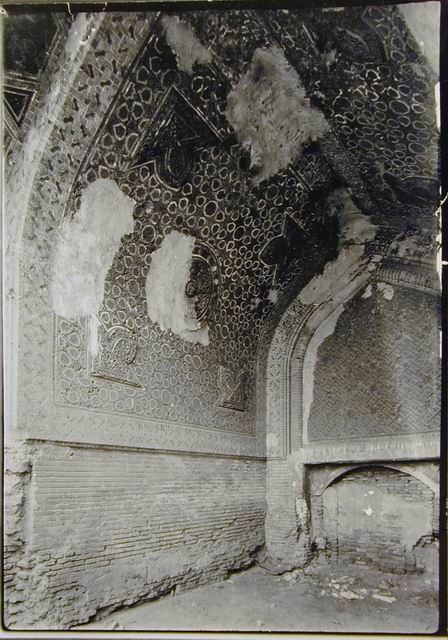