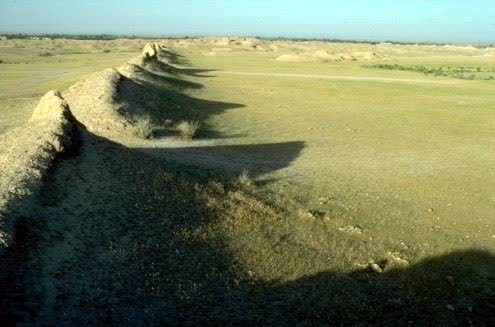 Share
Balkuwara (also spelled Barkuwara and locally known as Manqur) was a palace complex situated on the eastern shore of the Tigris River approximately 6 kilometers south of the contemporary city of Samarra. Historical sources attribute the building to the patronage of the Abbasid Caliph al-Mutawakkil, and specify that the palace was built for Mutawakkil's son, the prince al-Mu'tazz. Construction would have begun on the building between 849-859, and appears to have never been completed. The palace today lies in ruins, and excavations have only covered a small portion.
The palace includes three courtyards, nine halls, residential suites, mosques, and quarters for infantrymen in an expansive, enclosed complex measuring approximately 1,250 meters per side and 15 meters in height. The entire rectangular complex is divided into three parallel lengthwise sections. The palace is situated in the southern half of the complex surrounded by an assembly of private houses each containing sixteen rooms around a central courtyard, while the northern half is composed of two central courts, one succeeding the other and the accommodations for the army, including bazaars, baths, a polo field, and small mosques.
Balkuwara would have been a magnificent experience from both its interior and exterior as this sizeable palace is composed on a strong linear axis with its most prominent section positioned on the highest elevated area of the site. A court and garden encompassed by a wall supported by pilasters stretches in front of the palace along the river. Overlooking this area, the palace's façade features a triple arcade with the central arch rising over the two side ones. It is adorned with green glass and mother-of-pearl mosaic over a gold background. This entrance leads into a group of four public audience halls organized in a cross around a central, square chamber. This cruciform pattern is influenced from the region known today as eastern Iran. Square-shaped suites of eight rooms ordered around small courtyards extend between these halls. Emanating from the Throne Rooms to the northeast on the central vertical axis are the Courts of Honor, a series of three courts each boasting monumental entrances. Standing at the main entrance of the compound this progression of gates commands attention to the axiality of the site design.
The predominant building material at the site is brick, baked and raw, with doors made of the finest lumber. Conventional for the times, vaulting was the established method for the ceilings. Decoration at the compound varies between stucco-work, frescoes, colored glass windows and niches sometimes, square, circular or quatrefoil. As a royal palace, Balkuwara represents a new building typology, previously unknown in Islamic building tradition.
Sources:

Lesson 06: Architecture of Empire The Abbasids 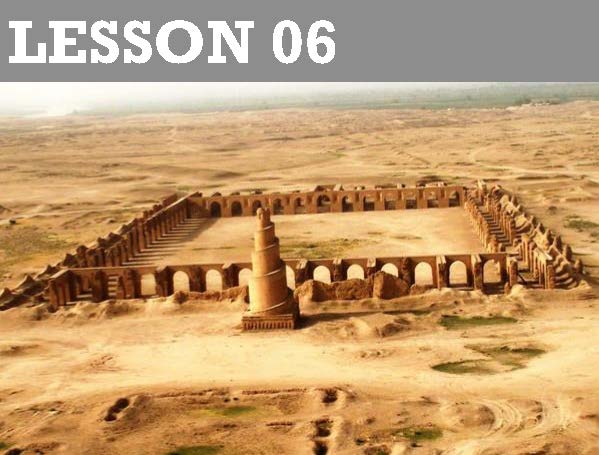