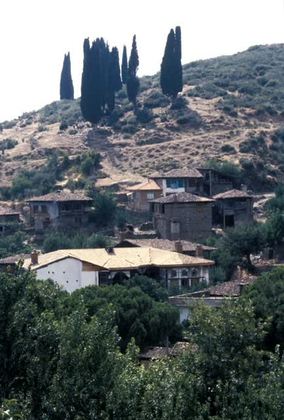 Share
Thought to have been commissioned in 1761 by Serif Ali Aga, the Çakir Aga Mansion was used continuously as a residence until the mid twentieth century. Its restoration was initiated by the Turkish Ministry of Culture in 1977 and continued in 1993 by General Directorate of Monuments and Museums until the mansion was re-opened as a museum in 1995. Interior arrangements and the planning of exhibitions were carried out by the Izmir Archeology Museum and Odemis Museum.

The plan of the mansion is roughly rectangular, with the long side aligned with the street to the southwest. There is a garden courtyard to the northeast. It has three stories covered by a hipped wooden roof that has eaves projecting out as much as two meters. There are two doors on the street façade; the larger one to the right is the main entrance. Inside, a small room for guards and attendants is placed between the two doors to control access.

The entry floor is paved with stone and opens out to the garden, like a portico. Four enclosed rooms placed at the corners were either used for storage or used by the servants and guards. The four columns of the portico carry the porch-like hallways of the two floors above, which give access to the rooms. Although the service buildings, such as the kitchen, have not survived; they were probably in the garden, accessed from the entry floor of the houses, or separately from the street.

A steep staircase leads up to the second floor, which has one iwan above the main entrance and five rooms; three facing the street and two projecting into the courtyard, at either end of the hallway. There is a small balcony at the center of the hallway, which is repeated on the upper floor. The six windows facing the street are pierced into the stone wall continued from the lower story and guarded with grills. The windows of the northern garden rooms are topped by square upper windows for additional light. Niches carved into the thick walls were used as shelves and cupboards. This floor was used mainly in winter and primarily by the women and children.

There are four rooms on the top floor, which has high ceilings. The two rooms facing the street are separated by a big iwan and have small anterooms. As on the second floor, iwans placed at either end of the hallway separate the street-facing rooms from the garden rooms. The main iwan, which is separated by a triple archway from the hall stands directly across from the balcony here, which have a roof resting on slender wooden columns.

The two rooms and iwans facing the street project onto the street carried on wooden brackets attached to the stone wall of the lower two floors. Their three windows are topped by arched upper windows. All rooms except for the southern room, facing the street, which was the summer reception room, have fireplaces. Both floors have a single toilet adjoining the eastern garden room. On all floors the rooms have windows facing the open hallway as well as the street or the garden. The northwest façade, however, is left blind. Unlike other houses of its size, the Çakir Aga Mansion has no visible separation of the family quarters (haremlik) from the men's quarter (selamlik).

The mansion has a composite structure. The walls of the two lower floors are made of stone and adobe masonry, while the top floor has a wooden skeletal system with rubble infill. The timber joints and infill are plastered except at the corners. The street wall is also covered with plaster and painted to give the appearance of the ashlar masonry.

Çakir Aga Mansion has many paintings decorating its walls that depict a wide variety of subjects, including buildings in landscape, still life compositions, flowers, and fake curtain and columns. Other panels include imagined panoramic views of Ottoman cities like Izmir and Istanbul. Its wooden ceilings have some smaller paintings of the moon and stars, fruits and flowers framed with fine moldings. While most of the paintings on the interior walls were preserved, the paintings on the outer surfaces, which were influenced by European models, have deteriorated over time and were removed at later restorations. The mansion also exhibits quality on the moldings of the bay windows, window shutters, railings and balustrades.

Largely preserved to its original state, Çakir Aga Mansion is a quintessential example of historical wooden mansions of western Anatolia. 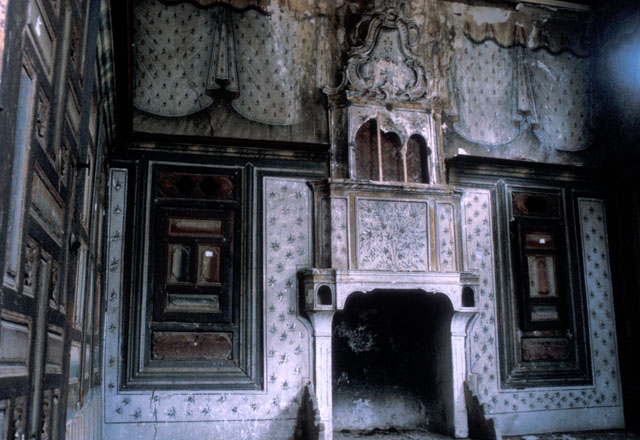