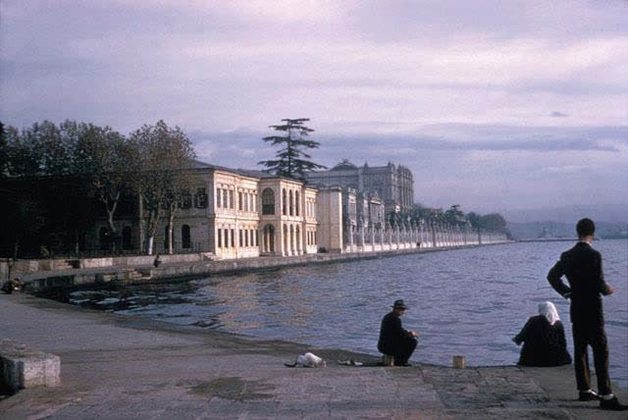 Share
The Dolmabahçe Palace is located along the European shore of the Bosphorus between the ports of Kabatas and Besiktas. At first a shallow bay where the Ottoman navy used to anchor, the coast was filled in during the rule of Ahmed I (1603-1617) and Selim II (1566-1574) built a pool and kiosk here. Palatial buildings added by Murad IV (1648-1687) were rebuilt during the rule of Ahmed III (1703-1730). His successor, Mahmud I (1730-1754) is known to have resided at this complex known as the Besiktas Coastal Palace, and he made the Bayildim Kiosk along its hillside.(1)

In 1846, following the order of Abdülmecid I (1839-1861), older palatial buildings were torn down to construct a new palace in their place designed by Imperial Architect Garabet Balyan. Construction ended in 1855 and the opening ceremony was held after the Crimean War in 1856. Following the death of Abdülmecid I, the palace became a secondary residence for Abdülaziz I (1861-1876) who constructed two new palaces along the Bosphorus at Beylerbeyi and Ciragan. His successor, Abdülhamid II (1876-1909), chose to expand the Yildiz Palatial Complex on the Besiktas hills. The imperial family moved back into the Dolmabahçe Palace during the rule of Mehmed V (1909-1918) and it was from here that the last Ottoman Sultan Mehmed VI was exiled to Paris after the Turkish National Assembly abolished the Sultanate in 1921. Caliph Abdülmecid Efendi remained at the palace until the Caliphate was abolished in 1924; some of his own paintings still decorate the palace walls today. Mustafa Kemal Atatürk, the first President of the Turkish Republic, stayed and received foreign guests at the Dolmabahçe Palace on his trips to Istanbul away from the new capital in Ankara, and he died in the palace in 1938. The palace has hosted many significant conferences of the Republican Period and is open to visitors as a public museum since 1952.

Occupying an area close to 250,000 square meters, the palatial complex consists of a walled inner palace along the waterfront and clusters of service buildings in the forest outside of the landwalls. In the long strip between the tall land wall and the waterfront are, from west to east; the Treasury Gate and Imperial Treasury (Hazine-i Hassa), Furniture Registry (Mefrusat Dairesi), the state gardens (Mabeyn Bahçesi), the main palace composed of the administrative (Mabeyn-i Hümayun or Resmi Daire), ceremonial (Muayede Salonu) and harem (Harem-i Hümayun) quarters, the palace of the Crown Prince (Veliaht Dairesi), the quarters of the gentlemen-in-waiting (Musahiban Dairesi) with dormitories behind it that house the servants (Agavat Dairesi, Bendegan Dairesi) and the guards (Baltacilar Dairesi), and the imperial kitchens (Matbah-i Amire).

The ceremonial and harem quarters of the main palace have separate back gardens protected by tall walls; the former garden has a glass kiosk (Camli Kösk) and bird houses (Kusluk) built by Mehmed IV along the landwall while the latter contains the inner treasury (Iç Hazine Dairesi), a plant nursery (Fidelik), small kitchens and the separate apartments of the women in the harem who were highly prized, called the higher favorites (Gedikli Cariyeler Dairesi). The Palace of the Crown Prince has a large back garden that has two wooden houses known as the departure kiosks (Hareket Köskleri), the quarters of the Chief Eunuch (Kizlaragasi Dairesi), a Hereke carpet workshop (Hereke dökümhanesi) and a sunhouse (sera). Two monumental gates, the Treasury Gate (Hazine Kapi) and the Imperial Gate (Saltanat Kapi) lead into the gardens of the administrative quarters to the west while seven small portals along the landwalls open into the back gardens of the different sections. The iron fence along the shore has five large gates for arrivals from the water.

Outside the Treasury Gate to the west are the clock-tower built by Abdülhamid II and the Dolmabahçe Mosque (or the Bezm-i Alem Valide Sultan Mosque), built at the same time as the palace. The offices of the Commander-in-Chief of the Ottoman Army (Serasker Dairesi) located between the mosque and the clock-tower and the imperial boathouse (Hamlacilar Dairesi) found immediately to the west of the mosque have not survived. To their north, the palace theater (Tiyatro) was destroyed for road expansion in 1937 while the royal stables (Istabl-i Amire) beyond it were taken down for the construction of the Inönü football stadium in 1947. Outside the landwall to the east and northeast were auxiliary buildings that housed a publishing press, pharmacy, barracks, laundry, cellars, mills, specialized kitchens and stables; the remaining among these structures are used by the Turkish Military. The construction of Swiss Hotel buildings in the palace forest immediately on the hill behind the main palace has further damaged the historical context of the palace.

The main palace is an L-shaped building, with a long façade along the Bosphorus that accommodates, from west to east, the administrative quarters (Mabeyn-i Hümayun), the ceremonial hall (Muayede Salonu) and the imperial harem (Harem-i Hümayun); the harem extends landward with a wing that houses the "favorites". The administrative quarters and the harem are two stories tall with a service basement. Their identical facades are symmetrical, with a double-story portico placed at the center of either section. Placed at the center, the ceremonial hall rises to a height double that of the flanking sections. The palace is organized around a series of large central halls aligning the longitudinal axis surrounded by smaller rooms and linked by corridors.

The administrative section is entered through a formal garden to the west. It has a highly formalized and symmetrical plan consisting of four major halls on two floors, linked by a monumental staircase at the center. The entrance hall (Medhal Salonu) and the ambassadorial hall (Süfera Salonu) above have identical cross-shaped plans adorned with crystal fireplaces at the inner corners. The ambassadorial hall and smaller rooms around it were used for the reception and entertainment of foreign guests and functionaries; they are some of the most spectacularly decorated rooms in the palace. Both halls open into the crystal staircase, a double-story staircase hall with a glass roof that is named after the crystal pillars of its balustrade. Located on the other side of the staircase are two identical oval halls on two floors. The lower hall, called the Men's Mounting Chamber (Selamlik Binek Salonu), has a garden entrance. Directly above it is the "Hall Facing Two Sides" (Zülvecheyn Salon), a meeting space named after its two iwans facing the Bosphorus to the south and the back gardens to the north. Study rooms, library and prayer rooms used by the Sultan are accessed from this hall, as well as the imperial bath complex, which is lit from above.

The ceremonial section consists of a square hall of monumental proportions where important protocol ceremonies and religious state ceremonies took place. Linked to the administrative section and the harem, with corridors on both the ground and gallery levels, the hall is entered primarily from the Bosphorus side where a sea gate has been placed to allow guests to arrive by water. Inside, the walls of the domed space are pushed outward to create shallow aisles. The aisles are separated by a triple arcade carried on groups of four columns on the sides and the peripheral space is further deepened by the use of semi-circular niches along the aisle walls. Emphasized with thick cornices and rich moldings, the architecture creates the impression of a vast limitless space defined only by a series of cascading columns and floating arches.

The harem, which appears identical to the administrative quarters, is composed of a hierarchical network of apartments, rooms and three baths arranged informally around ten large halls, five on each floor. The part of the harem facing the Bosphorus has the suites of the Sultan, the Queenmother and the Sultan's official wives whereas the landward wing facing the harem gardens was used primarily to house the "favorites" (cariyeler). The four halls facing the Bosphorus have elaborate and distinct decorative schemes. The harem's mounting chamber (Harem Binek Salonu) has stairs at either end leading out to the front and back gardens; the Blue Hall (Mavi Salon) above it has vaulted iwans facing both directions. Located at the end of the corridor that links the harem with the ceremonial hall and the administrative quarters, the Blue Hall was the main meeting space in the harem, in addition to the smaller Pink Hall (Pembe Salon) nearby it, which opened out to the harem portico.

The architecture of the palace is in neo-baroque style, although the plan reflects the elements of traditional Turkish residences at a large scale. The interior design was commissioned to Séchan, the interior designer of the Paris Opera. The decorations and furnishings were mostly imported from Europe under the direction of ambassador to France, Ahmed Fethi Pasa. They include vases from Sèvres, silk from Lyon, crystals from Bacarat, and candleholders from Britain, glass from Venice and chandeliers from Germany.

The Palace of the Crown Prince

The Palace of the Crown Prince is a separate structure located immediately to the east of the harem section. It is nearly identical to the Bosphorus wing of the harem. The two structures are separated by a wall and, closer to the water, a fence; yet it appears as an extension of the main palace when viewed from the water.

The Dolmabahçe Palace Complex is administered by the National Palaces Trust under the auspices of the Turkish Grand National Assembly (TBMM); the Main Palace and the Palace of the Crown Prince are open to visitors with guided tours. The Imperial Treasury and furniture workshops house the offices of the Trust as well as visitors' services. The Departure Kiosks behind the Palace of the Crown Prince hold a permanent exhibition of palatial lighting fixtures and the Glass Kiosk in the harem gardens is used as an art gallery. The State Materials Depôt uses the imperial kitchens located at the eastern end of the complex. 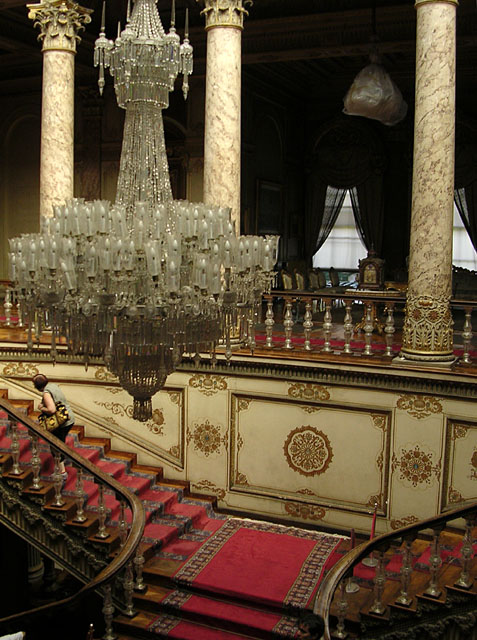