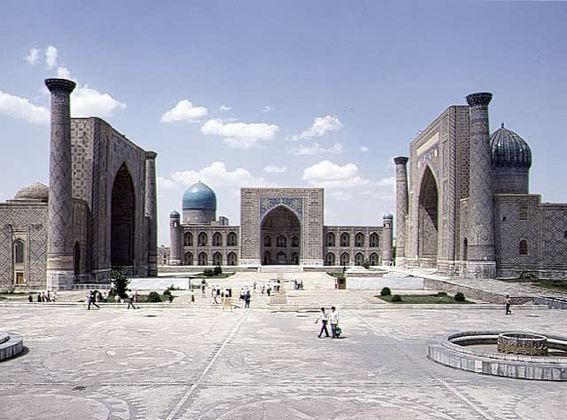 The ensemble of buildings on Registan Square in Samarkand consists of the 15th century Ulugh Beg Madrasa, the 17th century Tillya Kari Madrasa-Mosque , the 17th century Shir Dor Madrasa, and the 18th century market building called Chor Su (Chahar su). Together, these large and imposing buildings form one of the most stately and ceremonial public spaces in the Islamic world.

Situated on the ancient Silk Route, in Zarafshan Valley, Samarkand is one of the oldest cities of Transoxiana. Also called Maracanda by the invading armies of Alexander the Great in the fourth century B.C., the city was a fortified town to the north of present day Samarkand and was then known as Afrasiyab. After Alexander the Great, Afrasiyab and other regions of Central Asia formed part of the Seleucid Kingdom. The Arabs conquered Afrasiyab in 712 and it became the centre of struggle for liberation from the Caliphate. This period witnessed urban expansion and many mosques, bath-houses and madrasas were built within the boundaries of the city. During this period, the area to the south, which is the present day Samarkand, was still cultivated land and provided the agricultural products for Afrasiyab. In the spring of 1220, when the hordes of Genghis Khan over-ran the Zarafsban Valley and destroyed the city of Afrasiyab, the central functions of the city were moved south, into the plains that had once been agricultural land. The new city of Samarkand began to be formed.

From the end of the 14th century to the middle of the 15th century, Samarkand witnessed economic, political and cultural development as the capital of the Timurid Empire. In 1371-72, the city was surrounded by a massive wall 7 km in length with six major gates. On the western edge of the town, on a slight hill, was built the citadel, with 8 m high walls, to protect the Kok Sarai, Timur's famed palace· residence. Registan Square became the official centre of the city where royal decrees were proclaimed and public executions were held. It was during this period that some of the most impressive monuments of the city, such as the mausoleums of Shah-i-Zindeh, Bibi Khanum and Gur-i·Amir, were built. Timur's death in 1405 led to internal strife and feudal unrest.

After five years of struggle for power between his descendants, his son Shahrukh ascended the throne, but chose to live in Herat. [n 1409, Shahrukh passed the rule of Transoxiana and its capital city Samarkand to his son Ulugh Beg. Until his assassination in 1449, Ulugh Beg developed Samarkand into an important centre of culture and medieval science where many prominent astronomers, mathematicians and scientists met and discussed their theories. The young ruler, who himself was an astronomer, poet and scholar, embeUished the capital with further monuments during his reign. His madrasa, which forms part of Registan Square, was conceived as an ensemble that also included a khanaqah, a caravanserai and a mosque.

Half a century of internal strife followed the death of Ulugh Beg in 1449. Samarkand became the capital of the Shaibanids in 1500 and remained so until the end of the 16th century. During this period, the city retained prominence as the economic and political centre of the region. The Uzbek Astarkhanide dynasty ruled Samarkand during the fust half of the 17th century. Its leader Yalangtash Bahadur replaced Ulugh Beg's caravanserai at Registan Square with the Tillya Kari Madrasa. The khanaqah was replaced by the Shir Dor Madrasa. Today these three monumental buildings form the main composition of the renowned Registan Square.