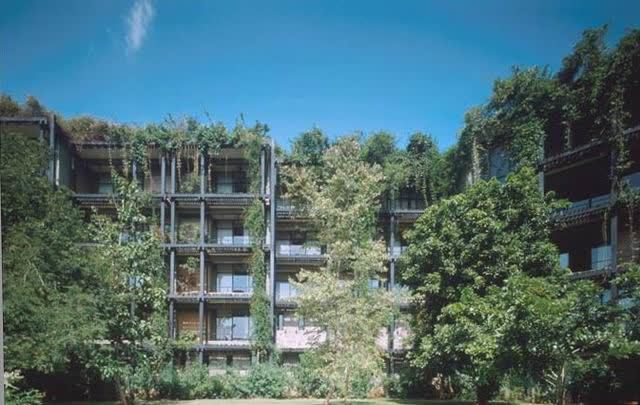 Share
The Kandalama Hotel, designed by Geoffrey Bawa, was constructed between 1992 and 1995 on the outskirts of Dambulla, Sri Lanka. The hotel was commissioned by the Aitken Spence Hotel Group to accommodate tourists visiting the nearby city of Sigiriya, a Sinhalese royal complex built in the fifth century A.D. around and atop the massive Sigiriya Rock. The famed ruins at Sigiriya relate harmoniously to their surroundings as architecture, earthworks, and frescoes strikingly frame and engage with the picturesque topography.

Though Aitken Spence originally intended to build the hotel adjacent to Sigiriya, Bawa insisted that the hotel instead be sited eleven kilometers southeast of the historic city and rock formation. The additional distance both protects the immediate surroundings of the cultural site and allows for picturesque views of the monument across the horizon of the Kandalama Lake, or reservoir, locally known as the "Kandalama Tank". The understated design for the Kandalama Hotel is stylistically a departure from earlier Bawa projects, yet the project possesses the sensitivity to context that consistently characterizes Bawa's work. Its effect on the visitor parallels that of Sigiriya, as a nuanced "third space" between landscape and architecture is developed through the thoughtful integration and juxtaposition of building and environment.

The Kandalama Hotel is a nine-kilometer drive east of the small town of Dambulla. The main entrance lobby is located at the end of a ramped 2.7-kilometer-long private road that branches north from a secondary arterial leading back to the center of town. From the earliest development phase of the project, Bawa was interested in developing a spatial and visual sequence of entry that culminated in the revelation of the distant view of the monument of Sigiriya only after entry to the hotel lobby. One of the most beautiful features of the hotel's design is the large, cave-like porte cochère abutting the western side of the cliff around which the hotel wraps. Guests enter the hotel under this huge slanted canopy that angles down towards the entrance to a compressed, enclosed walkway. The visitor winds through the confined tunnel-like passage, complete with a wall lined by boulders, suddenly discovering the liberating expansiveness of the open-air lobby and its panoramic view northward over the Kandalama Tank. Bawa thoughtfully choreographed this process of arrival in order to prolong and dramatize the threshold between the tree-shielded entrance drive and the spectacular views that the hotel lobby skillfully frames.

Political pressures influenced the plan of the project after the schematic design phase, as it became public knowledge that portions of the east wing of the hotel were planned to encroach upon lands belonging to an old Buddhist monastic precinct. The plan was restructured to reduce the size of the eastern guest wing, which necessitated the construction of a second guest wing to the southwest of the entrance lobby. This change was a major disappointment to Bawa, as his intention had always been that the entrance lobby would be the first building visible along the long ascent to the hotel complex. Though the west wing is visible from the entrance road, it was heavily camouflaged by planting in order to minimize its visual impact on the arriving guest so it ultimately does not detract significantly from Bawa's designed approach.

The final hotel design thus consists of three primary sections within a complex multi-story building that clings to the steep rock outcrop forming its eastern edge. In all, the irregularly-shaped building is approximately 430 meters in length, measured along the center of its curved plan, and between 4 and 55 meters in width. Shared facilities such as the lobby, restaurants, and pools are located in a series of broad terraced spaces at the center of the complex, while narrow extensions to the east and southwest of the public core contain the guest rooms. The east rooms are also known as the Sigiriya wing, and they provide a distant view of the Sigiriya rock across the horizon of the Kandalama Tank. This wing stretches 100 meters towards the east of the lobby and includes four stories of guest rooms. The Sigiriya wing is accessed via the second of three lobby levels, which is at the same elevation as the top floor of the guest rooms. The other three levels of guest accommodations cascade down the cliffside toward the Kandalama Tank below.

Being one of Bawa's earlier moves toward minimalism in building detailing, the design of the Kandalama Hotel was shocking to admirers of the vernacular influence visible in his previous projects. However, the subtlety of the architecture itself effectively foregrounds the drama of the cliff-side topography and breathtaking views. Some of the architectural differences between the Kandalama Hotel and other Bawa projects are also logical when one considers Bawa's unwavering commitment to building climatically appropriate architecture. The Kandalama Hotel is located in the central dry zone of Sri Lanka, unlike many of Bawa's other buildings on humid oceanfront sites, and thus its design must adapt to a different climate. While pitched roofs are a necessity in coastal areas that receive heavy rain, the flat roofs at Kandalama function well in a dry climate and are less material-intensive. However, some of the distinctions between this project and Bawa's earlier works are purely aesthetic and reflect the architect's evolving personal design philosophy. The Kandalama Hotel follows the model of his later projects, in which the majority of the ornamentation comes from sculptures and artworks by other artists distributed around the building. The detailing of the architecture itself remains plainly yet harmoniously articulated in neutral tones and natural materials, including white concrete walls, black painted concrete columns, and wood or iron railings and millwork.

The Kandalama Hotel is considered one of Bawa's most important works as it showcases so clearly Bawa's talent for creating affective spatial sequences and architectural narrative. The hotel was intended to serve as a building from which to view the pristine landscape of the Kandalama basin, and thus the lightness of the architectural articulation is an appropriate and successful design strategy. The hotel also features innovative building technologies and systems designed to mitigate the environmental impact of the building's operation on the catchment of the nearby lake. The Kandalama Hotel is an excellent example of how tourist facilities can be integrated into an undeveloped landscape successfully, fostering appreciation for the natural beauty of the setting while minimizing negative environmental consequences. 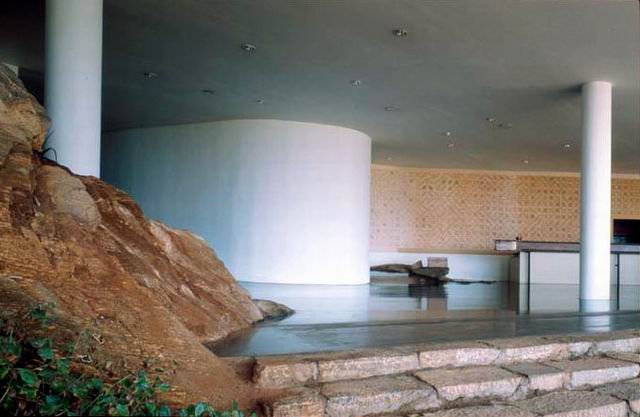