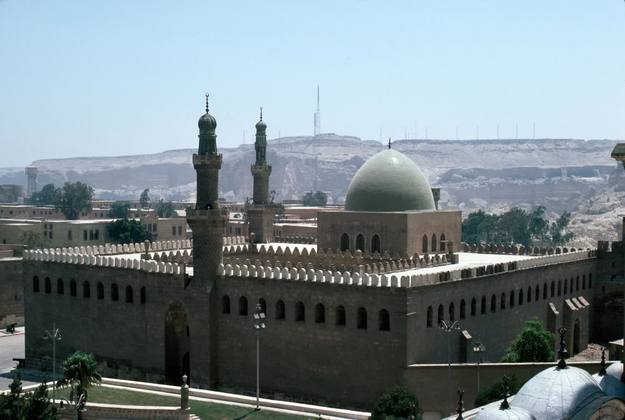 The mosque forms a free-standing, rectangular block, the austere exterior of which might be accounted for by the military nature of its setting. It follows the hypostyle scheme with the standard pattern of a rectangular courtyard, with a sanctuary on the qibla side and arcades surrounding its other three sides. The arcades of the sanctuary and around the courtyard are formed by marble columns with pre-Islamic capitals carrying pointed arches with ablaq voussoirs. Above each arch is a pair of pointed-arched windows. These windows form the lower part of the crenellated wall which was probably added above the arcades in 1335.

The two minarets exhibit features unique among the extant minarets of Egypt. The shafts and tops are believed to have been built in 1335. They are the only minarets in Egypt whose bases are below the level of the roof of the mosque. A possible explanation is that these bases predate the raising of the roof in 1335. According to Maqrizi, Amir Qawsun hired a Tabrizi architect to build his mosque (1329-30), which had two minarets modeled after the minarets on the Mosque of Vizier 'Ali Shah Ghilani at Tabriz (none of these exist today). Also fashionable in Ilkhanid Persia were faience mosaics, which, on this bulbous top, are executed in green, white and blue, like those on the sabil attached by al-Nasir Muhammad to the madrasa of his father Qalawun (sabil 1326, mosaics probably after 1348), with an inscription band of white faience mosaic around the neck of the bulb.

The crenellations around the base of the bulbous top of the eastern minaret are the earliest known experimentation with this technique at the base of a Cairene dome.

The circular shaft of the western minaret's first story is carved with a herringbone or vertical zigzag pattern; that of the second story, which is also circular, is carved with a horizontal zigzag motif or chevrons. These zigzag motifs make their first appearance around the shafts of Egyptian minarets at this mosque. The western minaret continues the Cairene tradition of placing minarets at the portals of foundations. Its location at the western portal, which was the ceremonial entrance facing the sultan's apartments, accounts for the distinguishing of its shafts from those of the eastern minaret by lavish stone carving.

The mosque's height was increased, roof rebuilt, and green-tiled wooden dome added over the maqsura in 1335. It was the royal mosque of the Mamluk sultans where their Friday prayers were performed. It was one of the most spectacular mosques of the city until the original tiled wooden dome over the nine-bay maqsura in front of the mihrab collapsed in the 16th c. and the marble dado was carried off by Sultan Selim to Istanbul. 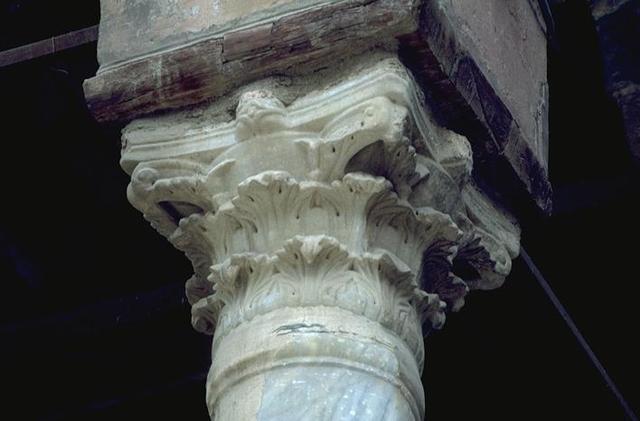