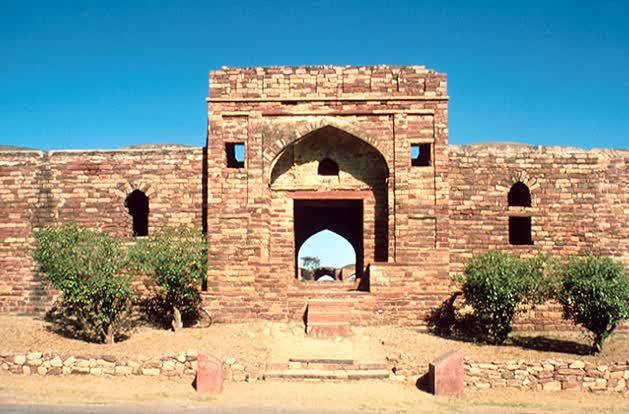 Share
Continuing west from the Chahar Suq, the bazaar pathway passes two independent structures bordering the Diwan-i 'Am. These are called the Taksal (Mint) and the Treasury, and both structures deviate from the north-south orientation of the palace buildings in favor of an orientation based on the topography. The triangular area formed by their intersection with the wall of the Diwan-i 'Am still contains some structures in poor condition, including some branched pillars. These pillars were typical of stables, and one hypothesis holds that these pillars remain from a stable demolished for the construction of the Taksal, or that this name is actually a misnomer for a structure that housed the imperial stables. A single-storied structure, the Taksal also could have contained the various workshops (karkhanas / buyutat) that manufactured objects for the daily use of the court. Spices, food and drinks could have been stored and packed here, textiles produced, and gemstones cut and set. Gold and silver coins may also have been minted here.

Dar al-Zarb (Taksal):
The Dar al-Zarb, or Taksal (Mint), is a low building composed of rubble masonry located on the north side of the road and aligned along a northeast-southwest axis. However, its southeast elevation, which faces the bazaar road, is not aligned with the road, instead being rotated a few degrees to the north of southwest. In the center of its this elevation, which projects slightly from the main wall, is an arched entrance 7 meters wide by 6.86 meters high that is accessed via a low flight of steps. On each side of the doorway beneath the arch is a stone seat; above the entrance are three or four small rooms. Small arched windows (1.37 meters wide by 1.52 high) are located 6.10 meters apart.

The structure comprises a quadrangle 72.58 by 80.21 meters that is wrapped by arcades divided into bays 5 meters high and 1.22 meters broad. Internally, these arcades are divided into two long aisles with a narrow arched passage between them, separating the rows of pillars. The central bays, each measuring about 4.8 by 4.8 meters, are topped by brick domes constructed in concentric circles. These domes may be the earliest Indian examples of radiating courses rather than horizontal layers in dome construction. The domes over the outer bays are corbelled in stepped courses. These domes, as well as their supporting pillars, may have originally been plastered.

At the west side of the quadrangle, the naturally lower gradient was used for a basement floor. In the quadrangle there are remaining traces of structures that were possibly intended to supply the workshops with water. A low wall, which likely formed part of an aqueduct, traverses the quadrangle diagonally from the south towards the north.

Karkhana-i Khass:
South of the Dar al-Zarb on the opposite side of the road is a small ruined building popularly called the Karkhana-i Khass or Khazana (Treasury); however, there is no written documentation to support this name. Assumptions concerning its function are based on its close proximity to the Mint. The hypothesis that sees the Mint as stables holds that the Treasury was the residence of the darogha, the supervisor of the stables.

After having passed the Mint and the Treasury, a visitor would find himself in an angular transitional space before entering a flat-roofed gateway on the east side of the Diwan-i 'Amm. 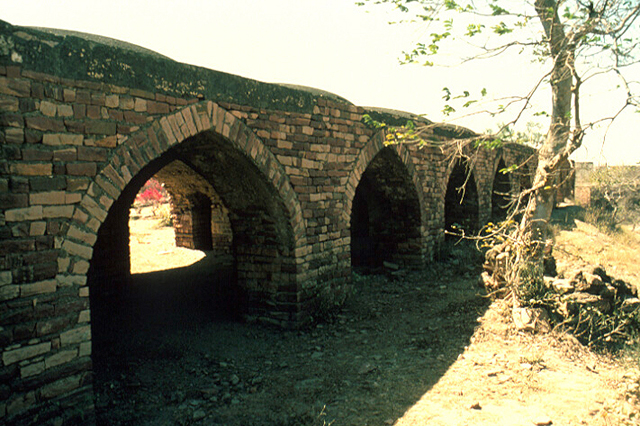