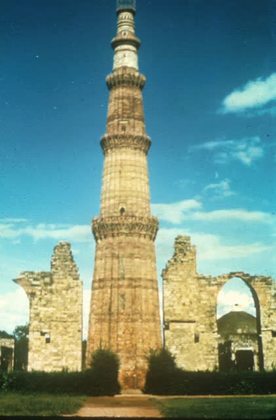 Share
The Qutb Minar (minaret) was commissioned by Qutb al-Din Aybak (reg. 1206 - 1211) in 1199. Located within the Quwwat ul Islam complex to the eastern side of the Qutb Mosque, it was conceived as a triumphal column proclaiming the mark of Islam in the world. The Qutb Minar was too high to be used by the muezzin for the call to prayer; rather, its symbolic function as a victory tower is stressed by its name: Qutb-al-Din, the founder and first sultan of the Islamic city of Delhi, used his own name, Qutb, or "axis," to mark the tower as a new axis for Islamic dominion. Its design was influenced by the two Ghaznavid minarets of Jam and Siyah Posh in Afghanistan.

At the time of Qutb al-Din Aybak's death, only the first story of the Qutb Minar had been completed. Iltutmish (reg. 1211 - 1236) resumed work on the Qutb Minar and added three more stories to it, topped by a cupola (chhatri). The present fourth and fifth stories, commissioned by Firuz Shah Tughluq, were added during post-lightning strike repairs in 1368. Subsequent repair work was carried out by the British during the British colonial period, but the original design of the minaret has been largely preserved.

The Qutb Minar was built of grey Delhi quartzite in ashlar masonry; the first three stories are revetted with red sandstone from Agra, while the upper two are also clad in white marble. Circular in plan, the minaret tapers upwards, measuring 13.7 m in diameter at the base and 3 m at the apex, scaling a total height of 72.3 meters. The first three stories were built according to local trabeated construction, while the upper stories were arcuate in construction.

Each story has a different design theme, and balconies project from each story. These balconies are supported on elaborately carved and inscribed stalactite-like brackets (muqarnas), structural elements which support the weight of the projecting balconies. A door on the northern side of the minaret, facing the Qutb mosque, leads to its internal spiral staircase that accesses each of the balconies. Small windows open onto this internal stairway.

The first story of the minaret is 29.1 meters in height, encircled by 12 wedge flanged pilasters alternating with 12 rounded flutes. The second story is 15.39 meters tall with semi-circular flutings and two bands of inscriptions; its balcony features a 0.9 meter-high railing. The third story is star-shaped in plan; it is 12.31 meters in height, and its surface is decorated with two bands of inscriptions. The height of the fourth story decreases to 7.3 meters, while the fifth and last story is 7 meters tall.

The Nakshi inscriptions on the Qutb Minar include Quranic verses and an account of the construction of the minaret, including its repairs. The inscriptions also serve political intents, declaring the greatness of the rulers involved in its construction.

The tower was quite susceptible to being struck by lightning: in 1368, Tughluq commissioned repairs to the Qutb Minar after a lightning strike; in 1503, Sikander Lodi had similar structural repairs carried out.

To resolve the problem of lightning strikes, a large number of iron clamps, in the form of cylindrical inserts, were added to reinforce the stone joints. These iron clamps acted both as dowels and lightning conductors. 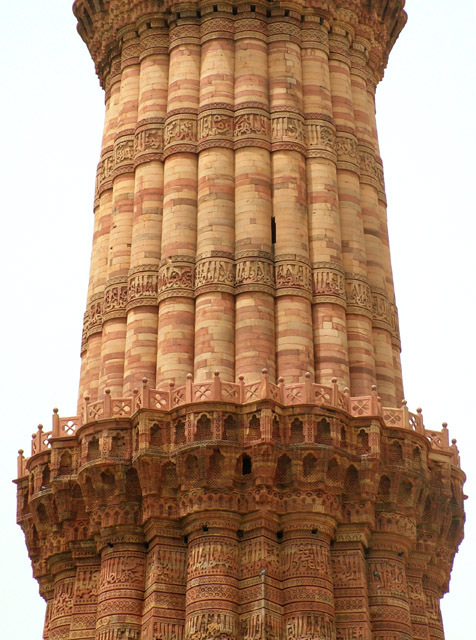