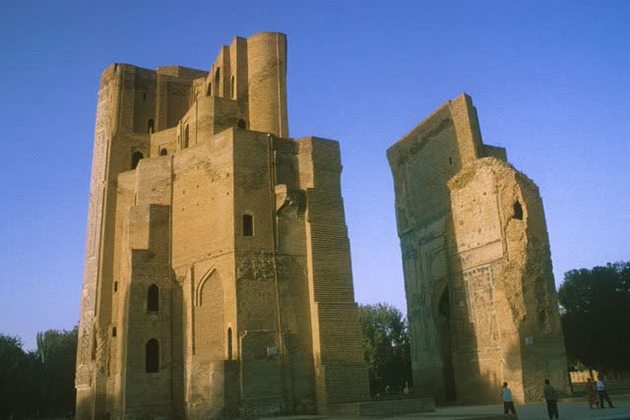 Share
A partially ruined monumental iwan from Aq Saray Palace is all that has survived from the legendary palaces of Timur (r. 1370–1405) in central Asia. Located in the northeastern part of Shahrisabz (lit. "Green City"), now in Uzbekistan, the construction of Aq Saray (lit. "White Palace") was ordered by Timur in 1380 after a victorious battle with Urgench. His birth city and the hometown of his clan, Shahrisabz (formerly Kesh) was Timur’s first capital and the initial locus of the lavish architectural patronage that characterizes the Timurid period.

The excavations on the site have not been adequate enough to reveal the plan of the complex; it is not clear where the remaining iwan was located in relation to other parts of the palace. Two early literary records have been the main source for the reconstruction of the palace: the first was written in 1404 by Ruy Gonzales de Clavijo, a Spanish envoy to the court of Timur, who visited the building while it was still under construction, and the second was by Babur, who gives a description of the complex in his famous book of memoirs, Baburnama, about a century after its completion. These two accounts have generated two hypotheses regarding the standing structure: while some scholars consider the iwan to have been the main entrance portal of the palace, represented in Clavijo’s account as a lofty, well-decorated pishtaq, others argue that it was the central iwan of the complex where the court of Timur was held. The second hypothesis is based on Clavijo’s description of the main iwan and Babur’s account, which mentions the same element without referring to a remarkable entrance iwan.

Nevertheless, the standing iwan is one of the largest built in the Islamic era surviving to date. Although it spans 22 meters and is 30 meters tall, it is estimated that the original vault was as tall as 50 meters. Facing north toward Samarqand, the remaining structure consists of two consecutive rectangular spaces with collapsed vaults. The larger iwan is framed by a portal screen and is flanked by two truncated cylindrical towers. (Historical sources suggest the original height of the towers to have been 60 to 70 meters.) The second narrower iwan, 13 meters in width, was closed by an arched wall.

Clavijo’s explanation attests to the monumental scale of the Aq Saray palace, which consisted of several courtyards, galleries and rooms. He mentions the long and high entrance with lateral brick arches covered with colorful tiles. The main component of the palace was the main courtyard, which had a large pool and was surrounded by decorated rooms. Clavijo also describes a high and wide door covered with precious materials and perfect workmanship. There was a special room in the palace where Timur feasted and spent time with the women of the harem. Clavijo describes the room as being “spacious and luxurious,” opening to a large garden with many fruit trees.

Both the remnants of glazed-tile revetment and the literary sources testify to the distinctive and splendid decoration of the palace. The remains of the tile work represent a unique combination of different patterns and diverse techniques of glazed ornaments of the time. The decoration of the Aq Saray palace represents an astonishing example of the use of color in the architecture of the eastern Islamic lands. On the twin towers, there are remains of a zigzag pattern that covered the towers and parts of the wall. Panels of vegetal motifs and calligraphic inscriptions, shaped by hexagonal tiles in the "haft rangi" technique, cover the internal walls of the first iwan.

The monument is also rich in epigraphs. An inscription on the east tower gives the date 1395, which appears to refer to the commencement of the decorative work rather than the construction of the whole complex (which, according to literary sources, began in 1380.) The artist’s signature indicates that the artists were brought from Tabriz (Azerbaijan in Iran) to Shahrisabz to create the decoration of the Aq Saray palace. Historical sources also refer to craftsmen and artists brought from Kharazm for the palace's construction.

Another type of inscription, composed of revered names in square Kufic in large geometrical patterns, is used extensively on upper sides of the towers and the vault of the iwan. A wide frieze separates the wall from the vault. The Kufic inscription of the frieze is remarkable in two ways. First, this style of Kufic is generally used for Quranic passages, but the remains indicate that the inscription was actually part of a poem. Secondly, this style is used more often on a small scale, rather than in the large scale of the frieze in this building.

The historic center of Sharisabz, including the Aq Saray, palace was added to the World Heritage List in November 2000.

Pope, Arthur U., and Phyllis Ackerman, eds. A Survey of Persian Art from Prehistoric Times to the Present, 1146-47. Tehran: Soroush Press, 1977. 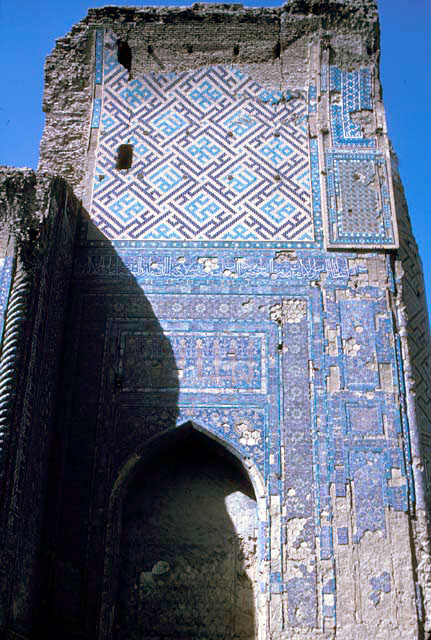