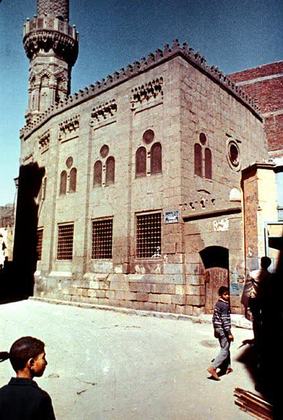 Share
The Mosque of Shaykh al-Burdayni was built in 1616 during the Ottoman era, but its intricate minaret and ornate interiors resonate with Mamluk architecture. It is located on Sharia Mukhtar Pasha, down the street from the Mosque of al-Malika Safiyya. Contrasting both in size and in architectural language, the former is compact but lavishly detailed, while the latter expresses a more subdued yet magnificent sense of space within the Ottoman tradition. The mosque was founded by Karim al-Din al-Burdayni, a wealthy Egyptian merchant of the Shafi'i rite. His cultural affiliation belonged neither to the Turks nor to the ruling class, and this may explain the mosque's predilection towards Mamluk architecture.

The mosque is L-shaped with two facades, one facing west with a portal and the other with the minaret on its right side. The minaret consists of an octagonal first tier, a circular second tier, and a bulb set directly above a balcony on stalactites. Drawing its richness of texture from late Mamluk ornamentation, the first tier is decorated with keel-arched niches framed with moldings and the second is carved with vegetal motifs. The two balconies rest on stalactites of different patterns. This is the only Ottoman minaret with an inscription band, running across the octagonal section and providing the date 1623, later than the rest of the mosque.

The interior of the mosque displays a successful revival of Mamluk art. The walls are entirely covered with marble polychrome panels, marble and mosaic arcading, and marble roundels. The prayer niche is decorated with inlaid marble and blue-glass plate, exemplifying the finest of the Mamluk tradition. The wooden ceiling is gilded to exude a soft glow, and the stained-glass windows add to the abundance of color. Opposite the prayer niche are a dikka and a wooden frieze with an inscription band, also in late Mamluk style, running along the walls under the ceiling. The wooden minbar is decorated with geometrical designs using inlaid mother of pearl. 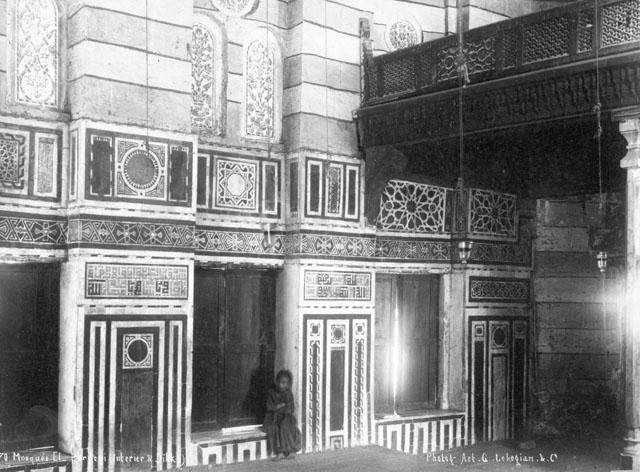