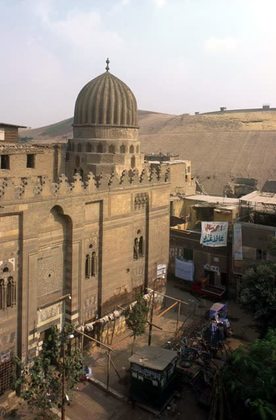 Share
The mosque of Amir Baha' al-Din Aslam al-Silahdar was built by the amir in 1344-5. Baha al-Din Aslam was a Kipchak Mamluk who rose to the rank of silahdar (sword bearer) of Sultan al-Nasir Muhammad. As a victim of vicious slander he was imprisoned for six and a half years and was not reinstated until the end of al-Nasir's reign. The historian al-Maqrizi describes him as a kind man, known for his good deeds, and a pious man who sat at the head of halqas (circles of students).

This mosque was built in stages, each segment of which was dictated by the preexisting structure and by the desire to achieve a unified and coherent scheme. The mausoleum, which predates the mosque, is integrated into the cruciform configuration of the complex following the Madrasa-Mausoleum of Ahmad al-Mihmandar as a prototype. Among the new variations that the plan of the mosque introduces on the four-iwan theme is the inclusion of an entrance that opens directly onto one of the iwans in addition to one that leads to the sahn through a bent passageway. This direct entrance on the south was probably the one through which the amir entered his mosque.

The iwans, which are of different heights, exhibit novel features both horizontally and vertically. Over the south and north iwans, which open onto the sahn through a tripartite portico, are rooms for the users of the complex. The room over the south iwan was most likely a reception room for the amir, who was also a shaykh in the madrasa, since it is also positioned above the princely (southern) entrance to the mosque. The opposite room, which has a separate staircase, was probably related to the rab' (no longer extant) on that side of the complex, and served, along with the iwan underneath it, as a madrasa for the Shafi'is. The facades of these rooms on the courtyard are pierced with triple windows and are adorned with striking carved stucco medallions and lozenges. The west side of the sahn is unique in its vertical volumetric organization, for it houses two balconies along with an iwan. The first balcony, which is made of wood and hangs across the iwan, probably functioned as a dikkat al-muballigh (for the call for prayer). The second, above the iwan, is a rare feature in Mamluk mosques and becomes popular only in Ottoman mosques. It was most likely used for theological discussions.

The ribbed brick dome of Aslam is adorned, at the base of the ribs, with fleurs-de-lis cresting in green, white and blue faience mosaic. The crenellations around the base of a dome are unusual for Mamluk Cairo. The Qur'anic verse running around the drum of the dome is also executed in polychrome faience mosaic, otherwise seen only on Cairene buildings with royal patrons. The inscription is the Throne Verse (2:255).

During the Burji period, the more traditional techniques of marble mosaic and glass paste, which were introduced for the first time in Cairo in the complex of Qalawun (1284-85), were employed to achieve polychromy. The panel of marble mosaic surrounding the oculus above the south portal clearly belongs to the same workshop that produced the marble mosaic framing the mihrab of the mosque of al-Bakri (1345). This complex is representative of the constantly evolving Bahri Mamluk religious architecture, with its rejection of fixed formulas and modules. New configurations of iwans, halls, portals, and courtyards were developed in response to the challenges of the land available and the new functional requirements of the project. Similarly, there are no fixed patterns for surface decoration; scattered elements were put together to form an ensemble for a specific surface area. 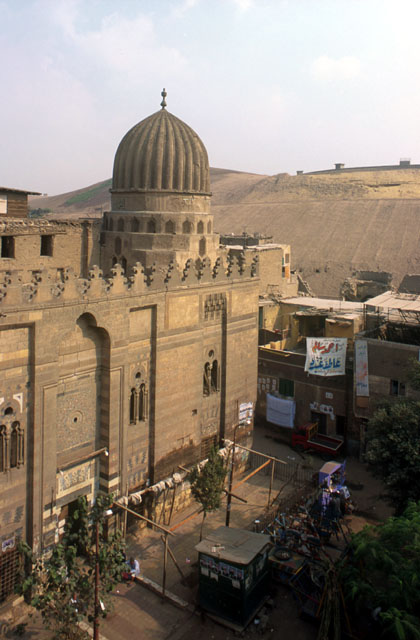