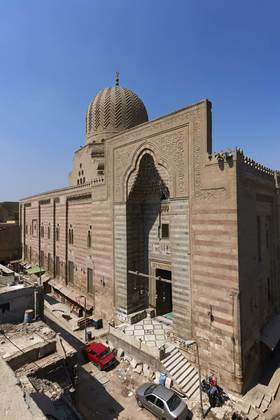 Share
Al-Mu'ayyad Shaykh, a Burji, or Circassian, Mamluk, was sultan from 1412 to 1421. Al-Maqrizi relates that during the reign of Faraj ibn Barquq, al-Mu'ayyad, a great intriguer during a time of great intrigues, was captured and thrown into a prison on this site. He suffered terribly from the lice and the fleas, and vowed then that if he ever came to power he would transform the infested prison into a "saintly place for the education of scholars." Sultan al-Mu'ayyad spent forty thousand dinars on its construction. Due to the sultan's lavish endowments, the madrasa became one of the prominent academic institutions of the fifteenth century. A large library was collected; the most eminent scholars of the day filled professorial chairs; and the most famous specialist in Quaranic exegesis in Egypt, Ibn Hajar al-'Asqalani, was installed as lecturer in Shafi'i jurisprudence. Unlike Barquq's madrasa-khanqah, in which the Sufis of the khanqah and students of the madrasa dwelt under the same roof and enjoyed exposure to each other's teachings and religious practices, this madrasa, whose curriculum comprised the study of official religion according to the four rites, was dedicated to Sufis only.

This was the last great hypostyle mosque to be built in Cairo. Among other things incorporated into the hypostyle scheme are a bent entrance and a burial chamber covered with a monumental dome, two hallmarks of Mamluk architecture. The muqarnas portal is set in a pishtaq, or rectangular frame, that rises above the wall of the facade. The door, which was reputed to have been illegally taken from the Madrasa of Sultan Hasan, is a masterpiece of Mamluk metalwork. The architect, Muhammad ibn al-Qazzaz exploited the mosque's proximity to Bab Zuwayla by using its towers as both buttresses and bases from which the two identical minarets rise. The carved chevrons decorating the exterior of the stone dome, which are also to be seen on the octagonal second stories of the twin minarets, provide an excellent example of this type of surface decoration for carved masonry domes from this period.

From the entrance vestibule one passes into the mausoleum, where the sultan and his eldest son are buried. On the largest cenotaph is a beautiful reused panel of tenth-century Kufic script, a verse from the Quran: "surely those who avoid evil will be among gardens and fountains: Enter them in peace, secure" (15:45-46). The graceful leaf forms that emanate from the vertical letters and fill the empty spaces over the horizontal letters are characteristic in early Islamic art of the desire to fill voids. These foliate beginnings led to very lush arabesque backgrounds for scripts.

From the mausoleum one enters the sanctuary of the congregational mosque, which is a late example in Cairo of the open courtyard plan on a large scale. The mosque originally had four facades, but in the late nineteenth century it was in such disrepair that the Comite rebuilt the western facade and turned the courtyard into a garden. The 2001 restorations by the Ministry of Culture removed this garden, however. The restorations also include the re-building of the missing arcades around the courtyard. Part of al-Qahira's southern wall has also been discovered. It is on display on the south side of the courtyard. On the western side of the courtyard is a hammam (bath) that is worth seeing. The decoration of the sanctuary is also of a richness and scale that scarcely occurs later in the Mamluk period. The mihrab and the minbar are both fine examples of the style of the period, while the ceilings, which were restored in the early twentieth century, look like suspended carpets.

A tomb chamber at the southwest end of the sanctuary was for the female members of the sultan's family. The chamber once had a dome, but now its cover is a flat roof. The Turkish tiles in the qibla wall were added during restoration work by Ibrahim Pasha, the son of Muhammad 'Ali, in 1839 or 1840. A door at this end of the sanctuary leads to the second-story platform of Bab Zuwayla and to the minarets. The view from the top is well worth the climb because it offers a superb perspective on the extent and contours of the mediaval city to the north and the south. Above the entrance of each minaret is a cartouche in which the architect al-Mu'allim Muhammad ibn al-Qazzaz has left his name and the dates of completion, 1421 and 1422. This signature by an architect is rare in Cairo. 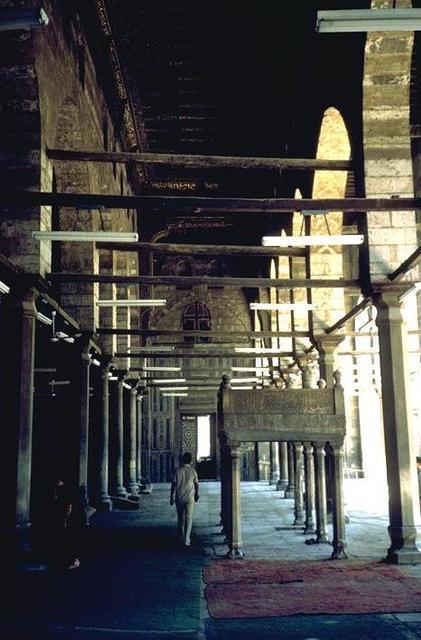