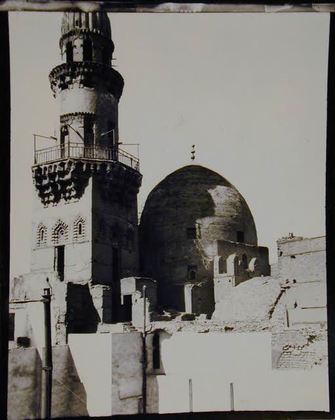 Share
The khanqah, ribat (no longer extant), and dependencies that comprise Baybars' complex were commissioned by him in 1307 when he was still an amir holding the position of the jashankir (taster) at the court of al-Nasir Muhammad during the latter's second reign (1299-1309). The minaret, portal, and mausoleum were commissioned by Baybars in 1309 after he had usurped the sultanate from al-Nasir Muhammad. The whole complex was finished in 1309-10. It was closed down by Sultan al-Nasir Muhammad in 1310 at the beginning of his third and longest reign (1309-40) when Baybars was killed, and he had it reopened in 1325. He also ordered the removal of the name of Baybars from the tiraz.

This is the oldest surviving khanqah in Cairo, and the second to be built in the heart of the Fatimid city after Saladin turned the Fatimid Palace of Sa'id al-Su'ada' into a foundation for sufis. It is the only extant Cairene khanqah displaying a four-iwan scheme, a concept borrowed from madrasa architecture. Also analogous to madrasa architecture from this early Bahri period is the introversion of the living units. The architect created a plan that accommodates a mausoleum with a vestibule that extends to the passersby and allows for a subtle adjustment of the Mecca-oriented interior to the street alignment. This portal helps shift the line of the street between two different parts of the complex, and a minaret carefully positioned to be highly visible. All three elements were brilliantly accommodated between the existing khanqah and the street without departing from the conventional rules dictating the orientation of funerary architecture with respect to both the street and Mecca.

The complex is built on the eastern flank of al-Mu'izz Street with a mausoleum added at a later stage. In both, the mausoleum is annexed to the end of the foundation on al-Mu'izz Street instead of the opposite end which houses the qibla iwan (sanctuary), a choice most likely made so that the blessings of the passersby could be marked for the deceased. The mausoleum of Baybars II is contained within the body of the foundation and extends to the street through a vestibule. This vestibule is a unique feature among Cairene royal mausolea, which usually look directly onto the street. Its large window is said to have been taken from the 'Abbasid caliphal palace in Baghdad and incorporated into the Fatimid Palace of the Vizierate on whose site this khanqah was built.

The bay of the muqarnas portal, which usually opens directly onto the street, is in this khanqah preceded by a larger entrance bay which opens directly onto the street through a lofty semicircular arch with cushion voussoirs. The continuous band of tiraz, which runs along the whole length of the facade, also turns into the two bays. Above the tiraz segment on the muqarnas portal and below the muqarnas hood is an oculus or bull's-eye window filled with a wooden mashrabiyya grille and outlined by a circular band of black and white joggled marble. This is the earliest extant example of a panel of marble surrounding an oculus adorning a portal. The bay of the muqarnas portal is flanked by two niches surmounted by hoods with ablaq voussoirs. The two inner side faces of the bay of the muqarnas portal are also each adorned with a similar niche but flanked with engaged colonnettes. The doorway displays a door faced with a bronze plate which is decorated with a star-shaped pattern.

The minaret is unique among the extant Cairene minarets of this specific type for substituting a circular second story for the standard octagonal one. The crowning element consists of a ribbed helmet on a circular pavilion with a muqarnas cornice adorning the base of the helmet.

Behrens-Abouseif, Doris. Cairo of the Mamluks: A History of Architecture and its Culture. London: I.B. Tauris, 2007. 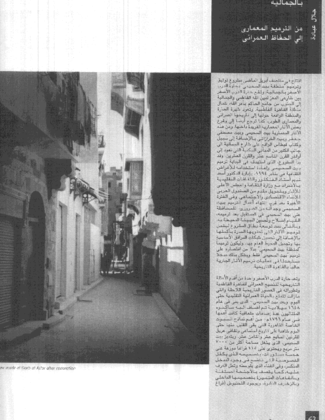 Citation
Abada, Galal. Historic Cairo: 50 Years of Projects, Planning, and Non-Implementation. In Medina Issue Thirteen Architecture, Interiors & Fine Arts. British Virgin Islands: Medina Magazine. (May - June 2000): 58- 63.
Description
Medina Magazine is a unique and ambitious project in the Middle East by a group of architects, designers and artists to collaborate to present both architecture conceived and created in Egypt, and examples from other contexts that contain elements relevant to architectural designers, students and educators working in Egypt.

This magazine that has been published in Arabic and English since 1998 is divided into three sections to aid the reader in critiquing their built environment; to see that each component negotiates with the other to form our visual world. Structure, decorative details and interpretations of spaces and how society reacts to them anchor Medina's founders' conception as apparent in the selection of articles presented on ArchNet.

Medina goes even further than presenting architectural, design and art projects; as part of their design revolution in Egypt, Medina also organizes annual design competitions for students and professionals, as well as supporting symposiums and art projects.