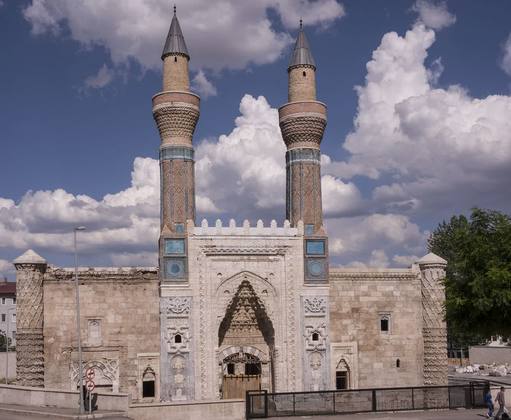 Share
The Gökmedrese (also written Gök Medrese) is one of three madrasas built in Sivas in 1271, the others being the Buruciye Medrese and the Çifte Minareli Madrese. The construction was funded by Seljuk vizier Sahip Ata during the rule of Ghiyath al-Din Kaykhusraw III, and built in stone by the mason and architect Kaluyan al-Konavi (of Konya). His name is inscribed on either side of the porch doorway.
The madrasa was originally part of a much larger building complex of which little remains. In plan, proportion, and decoration it is the most developed of all Seljuk madrasas. The plan follows a traditional four iwan courtyard madrasa, although the iwan opposite the entrance no longer exists. The arcades on the long (north and south) sides of the courtyard each had, in addition to an ornate iwan, two stories of six rooms, for a total of twenty-four.
The façade of the madrasa faces east. The highly decorated central portal is flanked on either side by a brick minaret rising directly from the top of the portal; the corners are enhanced by three-quarter round decorated buttresses. The symmetry of the façade is broken by a fountain on the left wall, one of the first to be incorporated directly into a Seljuk building. The portal is marble and ornately carved throughout with Seljuk motifs, inscriptions, and figural relief. The minarets are built of red brick with decoration in black and blue tile.
To the right of the passage as one passes through the portal is a small domed masjid. The dome is set on Turkish triangles decorated with blue and black geometric tiles and an inscription band of black letters set in a blue ground.
Four iwans once surrounded the courtyard; three remain. Each is decorated in exquisite blue faience much like that seen in the masjid. Unique to the decoration of the tile work of the Gökmedrese is the use of tiles in relief, adding shadows to the already complex designs. A floral decoration runs completely around the courtyard between the first and second floor, tying the building together. Much of the second floor is no longer extant.
Sources:

Sözen, Metin, and Ilhan Aksit. The Evolution of Turkish Art and Architecture. Istanbul: Has set Kitabevi, 1987. 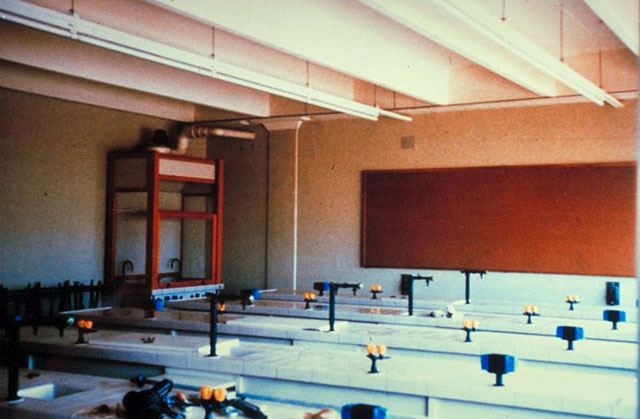