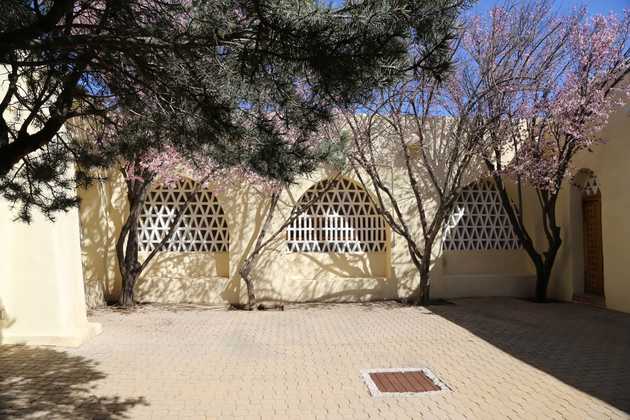 The last community project undertaken by Hassan Fathy was Dar al-Islam, a nonprofit educational organization established in Abiquiu, New Mexico. Nuridin Durkee, an American Muslim Scholar and Sahl Kabbani, a Saudi businessman, cofounded the project in 1979 with backing from the family of King Khalid ibn Abdul Aziz of Saudi Arabia.

They chose Abiquiu, New Mexico in part because the landscape would be similar to those of many Muslim lands, and because of the existing tradition of building with adobe. Drawing by Hassan Fathy provided the design for the original buildings.  When Fathy presented them in 1980 he brought with him Nubian masons who also demonstrated brick-making and building techniques.  (1).  The mosque was built to design, but the remaining plan has been altered and moderated to adhere to local building codes (2).

The community opened in 1982, and by 1986 the school had 7 full time teachers and 6 full time students.  It also provided workshops to train educators about Islam.(3)  Approximately 30 families had joined the community, which has been planned to house 150.

In 1989 James Steele, who has cataloged Hassan Fathy’s work around the world and written several books on the architect, described Dar al-Islam and it's intended purpose as follows.

The mosque was built by and for a new experimental community, whose members received instruction from Fathy and his team of Nubian masons (who came to the USA specially for the purpose) in the low-technology building techniques of vault and dome construction used in upper Egypt. Constructed entirely with mud brick, the mosque has loadbearing walls that carry arches and domes which cover the prayer hall, itself divided into single domed units.

The village which occupies an eleven-square-mile site on a plateau above the Chama River Valley, is intended for one hundred and fifty Muslim families to be grouped into comprehensible neighbourhood clusters. These clusters, which present little wall surface to the east and west for better thermal performance, all relate to a main square in the middle of the community, and a secondary "piazza" nearby, which provides a place for everyone to meet. A mosque, which has been the first building to be built in the community, is located in this piazza, and also includes a madrasa which is attached to it.

The mosque itself... is compact and fine, based on a nearly square plan that provides a forward prayer space for men and a screened area for women in a very efficient way. While the architectural style chosen for the village may seem foreign in this western context, it does have much in common with the local, adobe tradition. Judging from both the technical and economic complexities involved in using adobe here, however, it would seem that the intentional choice of this material and style was made for iconographic, rather than environmental or cultural reasons. (4)

By 1990 Dar al-Islam was struggling, partially due to the economic downturn, partly due to member attrition due to the challenges of living in such a remote location.  Walter ‘Abdur Ra'uf Declerck, Dar al- Islam’s administrator, helped restructure the organization.  Some land was sold to create an endowment that would help fund continued operation, and the mission was refined.(5)

Dar al-Islam now operates programs, both on the campus in New Mexico and nationwide, in three main areas: Education, including workshops, teacher institutes and materials development; Social Action addressing issues such as domestic violence and raising awareness around Islam in America; and hosting retreats, particularly for Muslim families, women and youth. (6)

In order to accommodate these activities, there has been some additional construction, including the addition of a lecture hall and three Yurt Dorms in 2002 (7).

Steele, James. The Hassan Fathy Collection. A Catalogue of Visual Documents at The Aga Khan Award for Architecture. Bern, Switzerland: The Aga Khan Trust for Culture, 1989. (Text available at http://archnet.org/publications/3528) 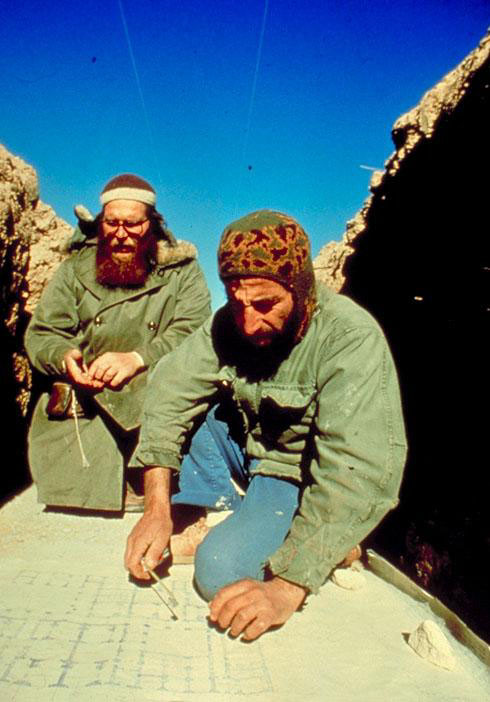