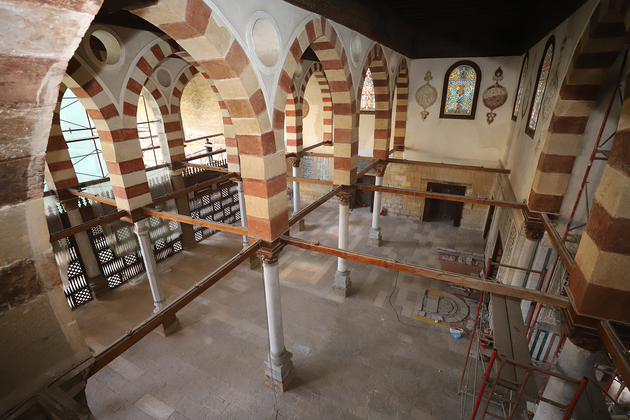 The mosque, located on the west side of Al-Tabbana Street, was built by Amir Altinbugha Al Maridani who was one of the Amirs of Sultan Al-Nasir Muhammad ibn Qala’un and also his son-in law. He started the construction in 1338-9 and finished it in 1340, under the supervision of the Mu’allim ibn Al-Suyufi, chief architect to Al-Nasir Muhammad. Its plan resembles that of the mosque of Al-Nasir in the Citadel, for it consists of an open sahn, surrounded by four riwaq, the qibla having four rows of arches, whereas each of the other three has two only.

The Comité de Conservation de l’Art Arabe carried out extensive restoration between 1896 and 1903. They have renewed defective masonry, replaced falling columns, repaired the marble dado, restored the mimbar, windows, and doors, and built a dome over the mihrab using the newly developed Hennebique reinforced concrete process. They also rebuilt the upper storey of the minaret and repaired all ceilings.

Such damages, associated to the use of some inappropriate past restoration materials, caused the building to deteriorate. Building management and maintenance were not performed regularly in the past decades and it became urgent to stop the deterioration process and re-establish the integrity of the building.

The rationale to focus on the interior prayer hall was based on the assessment that the most artistic and historically valuable component of the building is now in derelict condition, making it urgent to restore and bring back to integrity. The covered prayer hall of the Al-Maridani Mosque includes some of the most exceptional witnesses of the Bahri Mamluk architecture.

A second phase including additional studies was performed after the Ministry of Antiquities formally handed over the mosque to AKCS-E (12th of September 2018) receiving the project site and included collecting key material samples to carry out material analysis and conservation tests to determine all procedures and prepare work plans.

Today, damages affecting the building included old rising damp causing migration of soluble salts and erosion of stone and marble surfaces, rainwater ingress on the roof causing timber ceilings to deteriorate and man-made pollution of air, street traffic, and waste contamination resulting from illegal solid waste. The Al-Maridani Mosque is today a registered monument (number 120) within Islamic and Coptic Monuments of the Ministry of Antiquities. It has survived the passing of time not only thanks to the significant restoration campaign between 1896 and 1903impleneted under the auspices of the “Comité de Conservation de l’Art Arabe” but mainly due to the high quality of design and workmanship of its Mamluk builders, and to the continuous use as a congregational mosque. However, since this time, no significant conservation was done on the building and building maintenance was minimal.

The Mosque is one of the finest examples of Bahri Mamluk architecture in Cairo and it contains a large number of high-quality ornaments such as a beautifully carved wooden screen separating the Quibla Riwaq from the rest of the mosque, monumental granite columns and capitals, reused from the Roman period, a Mihrab of color marble with bands of thin tracery, inlaid with mother of pearl of the finest craftsmanship, ceilings painted and gilded with geometrical designs. 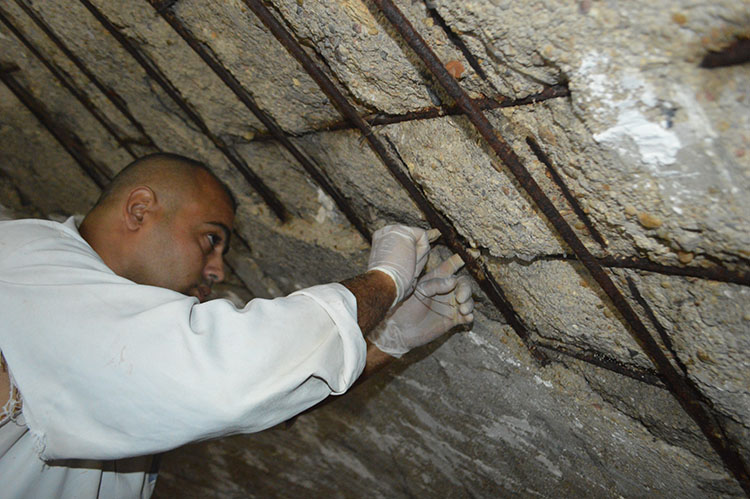