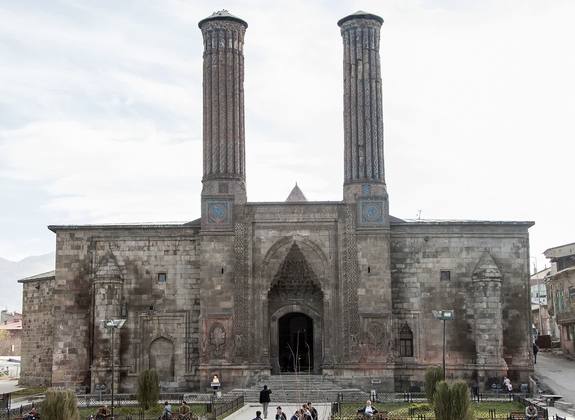 Share
Erzurum's Çifte Minareli Medresesi (Twin Minarets Madrasa), built in the second half of the thirteenth century, has a colorful history not only as a theological school, but also as a gun foundry in the seventeenth century and as an arsenal and armory in the nineteenth century. More recently it has been used as a museum, which it continues to host today. It is the largest madrasa in Anatolia.
The construction of the school, also known as the Hatuniye Madrasa, has been alternately attributed to Hande Hatun, the daughter of Sultan Ala al-Din Kayqubad I (r. 1220-1236), and to Padisha Hatun, the wife of Il Khanid Sultan Gaykhatu (r. 1291-1295). The two attributions also suggest two different dates of construction: 1253 or 1290. Neither date is convincing, however, as it is more likely that the madrasa was completed before the demise of the Seljuk state in Erzurum in 1277, and after the Gök Madrasa in Sivas was built in 1271, a building which has been suggested as a model.
The madrasa is a two-storey, four-iwan building, thirty-five by forty-eight meters in plan. It is oriented along a north-south axis, with the main portal facing north. A ten-sided mausoleum (türbe) adjoins the building on its south side. The madrasa was built up against what was once the eastern city wall.
The northern façade is dominated by the twin minarets that give the monument its name. The twenty-six meter tall brick minarets are each fluted with sixteen flanges, the continuation of an architectural tradition with its origins in Central Asia. Each minaret sits on an octagonal base set atop a square pier. These piers frame the entryway and the monumental portal that projects (in plan) from the north wall. Each pier is carved in relief at the top and the base, with a main structure of plain-faced stone. The upper carving is a calligraphic medallion set in a square, with inscriptions naming Allah, the Prophet and the four Caliphs. The base is decorated in deep relief with a palm tree which springs from its roots of intertwined dragons and supports a double-headed eagle. The entire façade is similar to the Gök Madrasa in Sivas with carved floral motifs adorning the portal and a fountain to the left of the entrance.
The portal itself is richly decorated. Surmounting the shallow-arched doorway is a large muqarnas hood, in turn framed by a pointed arch and finally a large rectangular frame carved with vegetal patterns based on concentric bands of intertwining split palmette forms. The motif inhabiting the outermost band originates at its base from a vase.
Entering through the portal there is a small domed room to the west that was once a small masjid. The entrance hall opens through an arched iwan onto a courtyard twenty by thirty-six meters and surrounded on three sides by a two-story arcaded portico. The fourth side, to the south, is composed entirely of a large iwan that leads into the mausoleum. The east and west sides each have a central iwan. On the east and west sides, doorways lead to small cells off of the porticoes. These doorways are framed by muqarnas hoods and archways carved with great variety. There are nineteen rooms on the first floor and eighteen on the second, all entered through the arcaded portico. Only a few of the arcade column capitals are carved; it seems that this aspect of the madrasa was never completed.
The mausoleum (türbe) adjoined to the south end of the building can be accessed through a door in the back of the south iwan. On the exterior, the mausoleum is decorated with tall blind arches defined by continuous molding. Every other face has two windows, a small one high up just below the arch, and a lower window decorated with muqarnas vaulting. A geometric frieze rings the entire tomb below the cornice. The conical roof is divided into segments and is decorated with arches in low relief. It is supported by a cornice of muqarnas decoration. The tomb's builder is unknown, and its decoration, like that of the madrasa, is unfinished.
Sources: 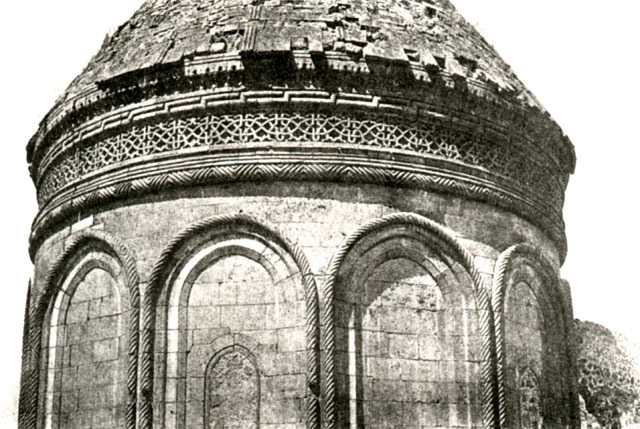