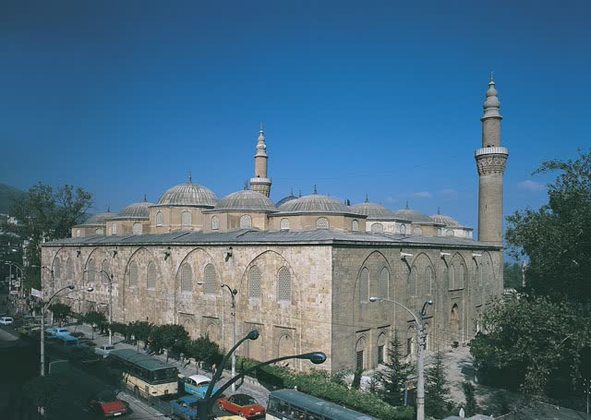 Share
Bursa Ulu Cami, or the Great Mosque of Bursa, is one of the city's oldest mosques, and is located at the center of the old town, near the markets. An inscription on a wooden minbar dated to 1399/802 AH dates the building to this year or before, and attributes it to the Ottoman sultan Bayezid I. Legend has it that Timur burned the mosque along with other monuments in the city center in 1402/804 AH, but the first recorded repair to the building dates to 1493/899 AH. Further repairs were made to the building throughout history. After the earthquake of 1855, Leon Parvillée made extensive repairs to the building, whose roof had collapsed, and further repairs dated to 1889/1307 AH.
The mosque is composed of a large central hall measuring sixty-three meters by fifty meters, covered with twenty domes supported on round arches that fall on thirty piers arranged in a regular grid. The structure is clearly expressed on the exterior where the eighteen piers that make up the wall and their connecting arches are left in relief, with large windows between. The building is entered through portals on the north, east, and west. Inside, at the intersection of axes from all entrances, a nineteenth-century marble ablution fountain is illuminated from a glass-plated dome above, the highest dome in the mosque. Eighteen of the domes were rebuilt in 1855 after collapsing in the earthquake. The interior is adorned with colossal inscriptions on piers presenting the ninety-names of Allah in diwani and küfi script with accompanying baroque decoration from the nineteenth/thirteenth century AH. The honey-colored limestone of the exterior, plastered white until recently was uncovered in the restoration of 1959. The two minarets, on the northeast and northwest corner of mosque, are made of brick bases faced with marble; their wooden and lead caps were replaced with baroque stone alternatives by Parvillée.
The minbar, composed of interlocking wooden pieces fitted together without glue or nails, is decorated on both sides with carved geometric designs creating an impression of the skies.
Sources: 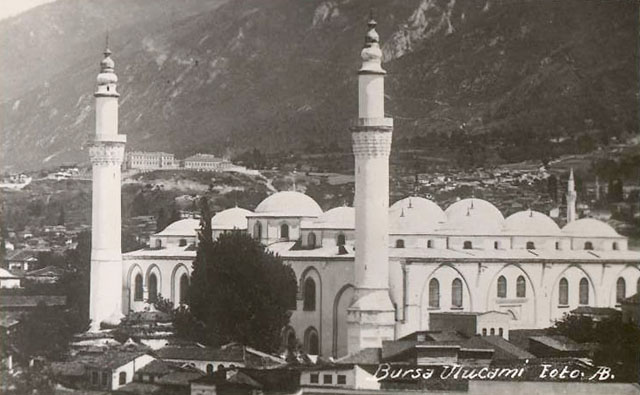