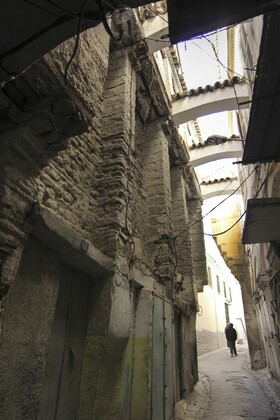 Share
The Rocher (meaning the rock) is the nickname given by the French to the old city of Constantine. The site is located on top of a steep rock and surrounded on three sides (North, East, and South) of a deep ravine, of 60 meters wide and 200 meters depth, through which flows Oued-Rhummel. This topographical configuration gives the Rocher a very singular, if not unique, natural defensive character.
The foundation date of the city has never been determined. However, one thing is certain, the Rocher was continuously inhabited by man for more than 2500 years, making it one of the oldest cities in the world still inhabited. It is also known that the first human establishment was created by the Carthaginians under the name of Cirta (meaning city). Afterward, the city knew great prosperity under the reign of the Numidians, during which it became capital of Syphax, Massinissa, Micipsa, and Adherbal, until it became a Roman colony in the year 44 BC, and received the name of Cirta Julia. Little has remained from the Roman era mostly because, in 311, the city was completely destroyed by Emperor Maxentius, as a punishment for the insurrection of the vicarius of Africa, named Domitius Alexander.
Two years later, in 313, the city was rebuilt by Flavius Constantinus, the new emperor of Rome who gave it his name Constantina. In the year 427, it was invaded by the Vandals, and then annexed by the Byzantines. Constantine became part of the Muslim world in 718 with the Arab conquests. The city prospered with the Fatimids, but especially with the Zirids and Hammadids. In the middle of the 16th century, the Ottomans made Constantine the capital of the eastern Beylik of the regency of Algiers. The city took then another form with a new architecture. With the exception of the Great Mosque, all the Islamic buildings of Constantine date back to this period.
After the French occupation in 1837, the city underwent major renovation works, giving it a European character. From then on, it was composed of three main entities: the European district in the west of the Rocher, characterized by public buildings and widened streets; the Casbah in the north-east, which was a citadel on the highest point of the city and now contains barracks; The Souika in the south-east which is the district that has kept the traditional character from the Ottoman era.
--Amine Kasmi, 2018
SOURCES:
Bendakir, Mahmoud. La medersa en chantier. Grenoble: Ecole d'architecture de Grenoble, 2004.
Cherbonneau, Auguste. “Constantine et ses antiquités.” Annuaire de la Société archéologique de la province de Constantine (1853).
https://gallica.bnf.fr/ark:/12148/bpt6k57896015.texteImage
Mercier, Ernest. Histoire de Constantine, Constantine: Marie et Biron, 1903.
https://gallica.bnf.fr/ark:/12148/bpt6k5735219v
Nait Amar, Nadra. “Constantine, un site antique, un passé historique et une identité spécifique.” In La médina tissu urbain à sauvegarder, Proceedings of the colloquium held in Tlemcen, 13 and 14 May 2008. 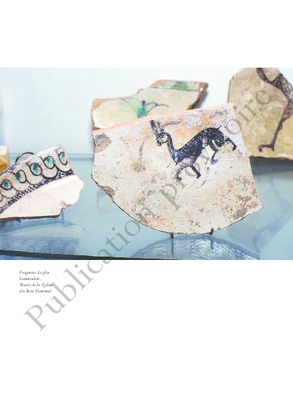 This three-day itinerary begins in Qalaa des Beni Hammad; the second day focuses on Sétif; and the third on Béjaia and Constantine.