Chihilsitoon Garden is a 12.5-hectare public site, located four kilometres south of Babur’s Garden, on the same range of foothills of the Sher Darwaza Mountain. Historic documents are believed to refer to this area as early as the sixteenth century, describing an outpost where Mughal troops were stationed in orchard gardens below a hillside settlement along the Kabul River. 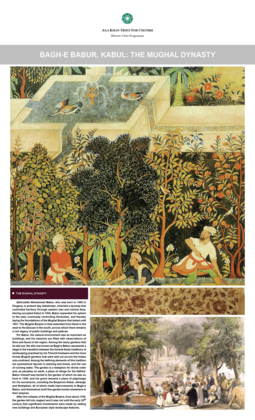 The Aga Khan Trust for Culture's work in Afghanistan is aimed at conserving and restoring Afghanistan’s cultural heritage, while stimulating local economic development and improving the quality of life for people living in surrounding neighbourhoods. As Afghanistan recovers from decades of destruction, this retrospective exhibition documents over 120 projects carried out in that country since 2002, that celebrate, restore, and maintain Afghanistan’s cultural presence and identity in the modern world.

The 58 graphic panels (for the Kabul section of the exhibition) were produced by the Aga Khan Historic Cities Programme office in Kabul.