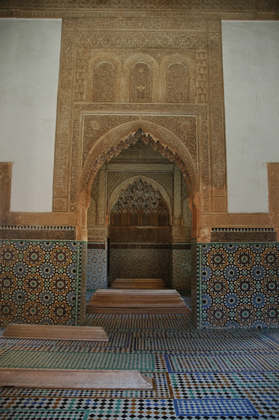 Share
Located in the northwest corner of the Sa'di Qasba in Marrakesh, Qubur al-Sa'dian, the Sa'dian Mausoleum, served as the dynastic burial site for the Sa'dian Sharifs of Morocco between 1557/964 and 1565/972 AH. The funerary complex consists of two mausolea located within a walled garden, bordering the southern edge of the Yaqub al-Mansur mosque. The small necropolis was likely built as an extension of that established Almohad mosque in order to lend religious authority to the recently empowered Sa'dian dynasty. The smaller of the structures and the royal gardens were constructed by Sultan Sidi Abdallah al-Ghalib (reg. 1557-1574/964-981 AH) to house the tomb of his father Sultan Mahammad al-Shaykh (reg. 1517-1557/922-964 AH). A second mausoleum was added along the western wall of the garden by Sultan Ahmad al-Mansur (reg. 1578-1603/985-1011 AH) between 1591/999 and 1603/1011 AH.

The funerary complex as defined by its perimeter garden walls measures eighty-five meters along its east-west axis and twenty-five meters along its north-south axis. The longitudinal axis of the garden is rotated sixty-nine degrees clockwise from the north-south meridian. The northern wall of the gardens directly abuts the southern wall of the Yaqub al-Mansur mosque. The other three walls of the gardens border dense residential neighborhoods, which gradually spread to occupy the majority of the interior of the former Sa'di qasaba. The gardens are accessible via a singular portal at the west edge of the complex.

Upon entering the necropolis at the center of the west elevation, one walks through a narrow open-air corridor towards the south, moving parallel to the west exterior wall. This corridor, approximately 13 meters in length, is the interstitial space between the west garden wall that defines the perimeter of the complex and the second, larger tomb constructed by Ahmad al-Mansur in 1590/998 AH. Two additional portals span between the tomb structure and the garden wall before the path turns to the east, wrapping around the southern end of the tomb of al-Mansur for an additional 15 meters. After a curve in the walkway to accommodate the projection of a small qibla niche at the south of the mausoleum, one finally enters the large open space of the royal funerary gardens.

The gardens are lushly landscaped, with a simple tiled walkway creating a path through the thick vegetation between the two tomb structures. The tomb of Mahammad al-Shaykh is housed in a small square edifice, approximately 4 meters to a side, that projects from the center of the north wall. This simple mausoleum, the only tomb structure constructed by Sidi Muhammad al-Ghalib, was later enlarged by Ahmad al-Mansur. The form of the original building is a cubic volume capped by a dome, typical of medieval Maghribi mausolea. In the 1590s al-Mansur commissioned an secondary enclosure to surround the original tomb pavilion. A large room, approximately 10 meters wide and 6 meters long, was constructed adjacent to the original qubba along its southern elevation. An entry to this secondary room is located in the center of its southern wall. The wooden ceiling of this room was never completed, but those details that were constructed reveal the strong influence that Almohad and Spanish carpentry had upon the decoration of the structure. Two additional loggias, approximately 4 meters wide and 2 meters long, were built to either side of the original qubba. These loggias feature doubled columns of white marble and cedar lintels with subtle epigraphic carvings. Together these spaces form a square pavilion, 10 meters to a side, capped with a green tiled roof. This complex now houses the original smaller tomb of al-Shakyh as well the tomb of al-Mansur's mother.

Around the same time that al-Mansur expanded the existing shrine to his ancestors, he constructed a second mausoleum to house his own tomb and those of his descendants at the west of the complex. This impressive structure is nearly twice as large as the older pavilion, approximately 15 meters wide east to west and 23 meters long north to south in plan. To the north of the central tomb space is a small lecture room, and to the south is a three-aisled mosque with a qibla niche. Like the tomb of al-Shaykh, the room containing the tomb of al-Mansur is square in plan with a domed roof, 10 meters long on each side and 12 meters in height. On the interior, twelve columns define a small gallery surrounding a large central space. Several small cenotaphs, coffin-shaped grave markers of stone, lie in the gallery while five larger cenotaphs, including that of al-Mansur, are displayed in the main space.

The tomb of the Sa'dian rulers is notable for its opulently decorated interiors, especially those of the larger tomb for al-Mansur. Colorful terracotta tile work in several complementary geometric patterns surfaces the floors and wraps up the lower portions of the walls. Two meters above the floor plane, the tile pattern transitions to a solid, carved terracotta cornice which is in turn topped by a stucco cornice bearing inscriptions. Above these cornices, decorative plasterwork covers the wall surface until its termination in a large cedar entablature supporting the wooden ceiling. The high ceilings of the mausoleum are particularly richly detailed, as finely scaled muqarnas executed in plaster cover both the rectangular cedar vaults spanning the central space and the barrel vaults of the thickened thresholds between the main volume and its surrounding galleries. Today the tombs are visited by admirers of the fine Sa'dian craftsmanship that is demonstrated in their rich, well-maintained interiors.